For All Jews Voting for Hillary

A photograph shows the Clintons posing with Palestinian leader Yasser Arafat. But what's the point? 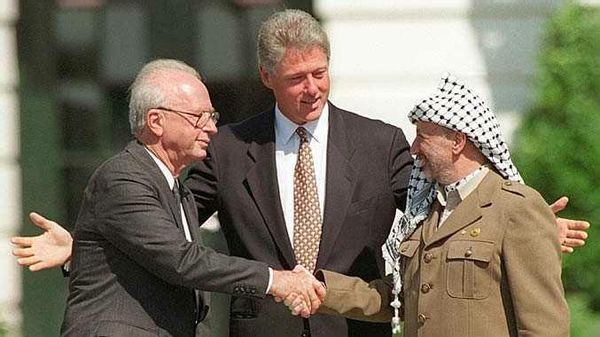 This photograph of the Clinton family posing with Palestinian leader Yasser Arafat hit social media in August 2016, where it was circulated with a legend reading "A sweet picture before you go to sleep. For all Jews voting for Hillary." It's unclear whether whoever crafted that legend expected Jewish voters to be outraged by a reminder that the Clintons ever countenanced the controversial former PLO chairman, or expected younger Jewish voters wouldn't recognize Arafat (who died in 2004) and would just viscerally react to a picture of President Clinton's wife and daughter smiling and wearing headscarves to cozy up to some Middle Eastern-looking guy.

Yasser Arafat was Chairman of the Palestine Liberation Organization (PLO) and President of the Palestinian National Authority (PNA), and during his term of office President Bill Clinton was involved in multiple negotiations with Arafat and Israeli leaders to end the decades-long conflict between the two sides. In 1994, Arafat shared a Nobel Peace Prize with Israeli prime minister Yitzhak Rabin and foreign minister Shimon Peres "for their efforts to create peace in the Middle East".

In any case, the occasion for the photograph shown here was a gathering of several world leaders in Morocco for the funeral of King Hassan II, during which meetings centered on pushing forward the Middle East peace process occurred between President Clinton, Israeli prime minister Ehud Barak, and Palestinian president Arafat. The image presented above is a little misleading, as it has been cropped to imply that the Clintons were posing alone with Arafat, when in fact they were jointly posing with Turkish president Suleyman Demirel: