Are the Spires on Disney World's Cinderella Castle Removable in Case of Hurricane?

An old but still thriving urban legend about Walt Disney World in Florida holds that the theme park's tallest structure, Cinderella Castle, was built such that it can be fully or partially dismantled in the event of a hurricane. 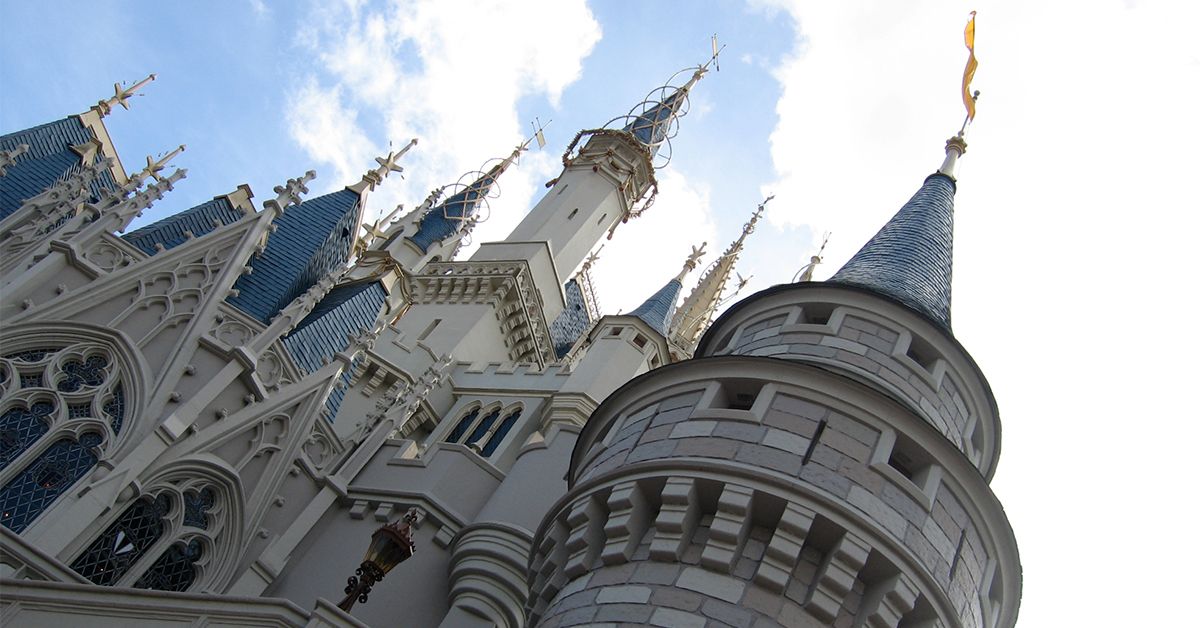 Claim:
Cinderella Castle in Walt Disney World in Orlando, Florida was constructed such that it can be partially or wholly disassembled in the event of a hurricane.
Rating:

While Florida was ramping up preparations for the arrival of devastating Hurricane Irma in early September 2017, a rumor spread that construction crews at Walt Disney World in Orlando were hard at work detaching the spires from the Magic Kingdom's most iconic structure, Cinderella Castle, to prevent storm damage.

It was strange because it seemed to confirm a decades-old, long-since-debunked urban legend that the Cinderella Castle was designed and built such that all or part of it can be quickly "dismantled" in the event of an approaching hurricane. Disney officials say that isn't true.

When the web site of the British newspaper The Guardian reported that Walt Disney World would close its doors on 10 September 2017 in advance of Hurricane Irma, the article included an embedded tweet noting that Cinderella Castle's spires were being removed to spare them from the storm, complete with an alleged photo of the project:

"The spires of Cinderella's Castle at Disney's Magic Kingdom are being removed in preparation for Hurricane Irma, … https://t.co/cv3VsWKApl pic.twitter.com/1BsQib1pLt

The tweet turned up on several other web sites as well, including that of the Alabama Media Group (AL.com), where it was used in a 9 September report on how various Florida theme parks were preparing for the hurricane. None of the web sites questioned the legitimacy of the claim, though they should have. The original tweet, dated 5 September 2017, was an admitted prank.

It issued from the Twitter account of WDW Kingdomcast, which is also the name of an irreverent podcast about the goings-on at Walt Disney World. The same claim was posted on the podcast's Facebook page. Buried among the 1,000-plus comments on that post was the following post hoc disclaimer stating that the announcement had been a gag based on "a very common myth":

We traced the photo of the crane supposedly detaching Cinderella Castle's spires to a February 2016 blog post documenting the removal of Christmas lights.

It is indeed an exceptionally common myth that part or all of Cinderella Castle is removable or dismantlable in an emergency. In 2010, it was listed by Time as one of the top five most popular urban legends about Disney World. Going back further, we find it mentioned and debunked in a 1997 Chicago Tribune article on the "secrets" of the Magic Kingdom:

Ever hear the legend that Cinderella Castle can be dismantled in the event of an approaching hurricane? That's not only a tale, it's a fairy tale. According to imagineers involved in its construction, Cinderella Castle was built to code to withstand hurricane-force winds and can in no way be disassembled.

Describing the construction of the castle (which was still underway) in 1970, the Orlando Sentinel reported that more than 600 tons of steel are embedded in the concrete walls, turrets, and spires of the 189-foot-tall structure, which sits on a 100-by-100-foot concrete foundation. It has survived several hurricanes during the 45-plus years of Disney World's existence, including at least two major storms strong enough to require the park to be closed.

Photographs exist of the turrets and 40-foot-tall spires being hoisted into place toward the end of the construction process, a procedure which may have provided the inspiration for the notion that they are removable. Disney historian Jim Korkis writes in Secret Stories of Walt Disney World: Things You Never Knew You Never Knew:

One Disney "urban myth" is that in the event of a hurricane, the castle can be dismantled. That is untrue. The main building has an internal grid of steel framing, secured to a concrete foundation. The turrets and towers also have internal steel framing and were lifted by crane, then bolted permanently to the main structure. Since people saw the castle being assembled in two separate sections, they assumed it could also be dismantled that way as well. The castle can withstand hurricane winds of at least 90 miles per hour.

We found a couple interesting variants of the legend while searching through old issues of the Orlando Sentinel, including this one a reporter culled from the early internet in 1995:

A discussion about Cinderella's Castle, which several people said could be quickly dismantled if a major hurricane were headed its way. One said it could be torn down in 20 minutes; another said it had been done several times as part of a drill. The story gets better with each file — until a Disney employee breaks in to say basically that there's no more validity to the porta-castle story than the one about Walt being frozen.

And in this, our favorite version, also recounted in 1995 (in the aftermath of Hurricane Erin), the legend devolves into a pure flight of fantasy:

Much to the surprise of a reporter from an international news organization, Magic Kingdom officials did not — and cannot — lower Cinderella's Castle into the ground when a major storm is approaching. Disney officials, however, would neither confirm nor deny reports that in case of an emergency Epcot's Spaceship Earth can be deflated like a beach ball.