Was A Chinese Rocket Falling to Earth, and No One Knew Where It Would Crash?

An astrophysicist compared the landing to possibly "be the equivalent of a small plane crash scattered over 100 miles." 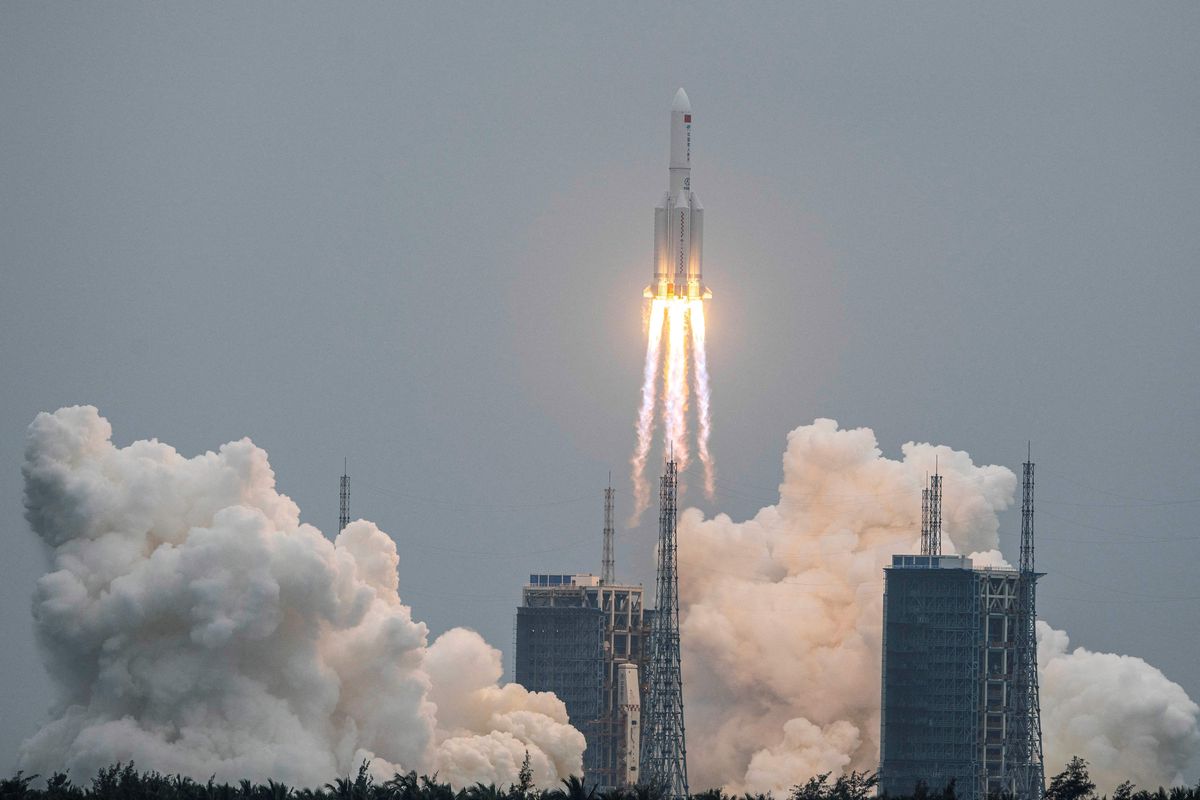 Claim:
In early May 2021, part of a Chinese rocket fell to Earth, and it was not entirely clear where the debris would land.
Rating:

It was true that the drag of Earth's atmosphere tug a portion of a Chinese rocket out of orbit in early May and that, for days, no one knew where the debris could rain down across a swath of the planet. However, China's space agency said the rocket debris had reentered Earth's atmosphere above the Maldives in the Indian Ocean on May 9, and "the vast majority of items were burned beyond recognition during the reentry process."

In May 2021, narrators in viral TikTok videos claimed a portion of a massive Chinese rocket had left Earth's orbit and was falling back to the planet where it would eventually land within the next couple weeks.

The catch? "No one knows where it's going to crash," one video claimed. The underlying assertion was true. As of early May, the drag of Earth's atmosphere was tugging a portion of a Chinese rocket out of orbit and scientists were preparing for its debris to potentially rain somewhere on the planet — anywhere between the northern latitude lines of New York and southern locations of New Zealand. Also, the extent of the rocket's disintegration while descending remained unknown.

However, those questions were eventually solved. China’s official Xinhua News Agency reported the rocket reentered Earth’s atmosphere above the Maldives in the Indian Ocean on May 9, and that most of it burned up during the trip, according to reputable news reports.

Let us back up to understand how the rocket reached Earth's orbit in the first place.

On April 29, China launched the main module of its first permanent space station (the module is called the Tianhe) using a 100-foot-tall Long March 5B rocket. Here's how The Associated Press covered the event:

Minutes after the launch, the fairing opened to expose the Tianhe atop the core stage of the rocket, with the characters for “China Manned Space” emblazoned on its exterior. Soon after, it separated from the rocket, which will orbit for about a week before falling to Earth, and minutes after that, opened its solar arrays to provide a steady energy source.

In other words, as part of China's space program, the Long March 5B rocket temporarily entered orbit in late April and its core indeed fell back to Earth with its gravitational pull. Instead of following a predetermined path, however, the portion of the space vehicle traveled in an "uncontrolled" manner — without an exact landing spot or course in mind.

Furthermore, the Aerospace Corporation, a U.S. research and development center, performed its own analysis of the object's orbit and predicted that it would reenter the Earth's atmosphere on May 10, plus or minus roughly two days. However, exactly where that would happen — or how much of the rocket would disintegrate while descending to Earth — remained unknown.

SpaceNews, a credible source of news about the global space industry, reported on April 30 (one day after the rocket's launch from the Wenchang Launch Center on the island of Hainan) that while much of the object would burn up, some debris could remain intact and rain anywhere between the northern latitude lines of New York, Madrid and Beijing and southern locations of Chile and Wellington, New Zealand.

"Where and when the new Long March 5B stage will land is impossible to predict. The decay of its orbit will increase as atmospheric drag brings it down into more denser," the article by Jones read. "The most likely event will see any debris surviving the intense heat of reentry falling into the oceans or uninhabited areas, but the risk remains of damage to people or property."

Meanwhile, Jonathan McDowell, an astrophysicist at the Astrophysics Center at Harvard University, told The Guardian the rocket's landing could "be the equivalent of a small plane crash scattered over 100 miles," and the debris would most likely land into the ocean considering Earth's land-to-sea ratio.

On May 4, the European Union's Space Surveillance and Tracking agency (EUSST), a consortium of European countries that studies space objects orbiting Earth, said it was also monitoring the object's trajectory.

"Our sensor network is observing the object in order to narrow downtime re-entry window expected in the coming days," the agency tweeted. All of those predictions ended on May 9 around 10:24 a.m. Beijing time, when social media users in Jordan, Oman, and Saudi Arabia posted footage of the debris in the sky, and the Chinese space agency said the "vast majority of items were burned beyond recognition during the reentry process," according to The Associated Press.

If, or to what extent, any pieces landed on any of Maldives' roughly 1,200 islands remained unknown.

It was not a first-of-its-kind event. Over the course of 50 or 60 incidents annually, objects weighing an average of 100 tons total reenter the Earth's atmosphere in a similar uncontrolled way, Holger Krag, of the European Space Agency, told SpaceNews.

However, since 1990, no space agency had deliberately left an object weighing more than 10 tons in orbit and allowed it to reenter Earth's atmosphere with no clear landing plan, according to the news reports. Experts believe the core of the Long March 5B weighs about 21 metric tons.

Considering the many unknowns of the rocket debris' landing in spring 2021, scientists outside of China criticized the space expedition. NASA Administrator Sen. Bill Nelson, for example, issued the below-displayed statement saying: “It is clear that China is failing to meet responsible standards regarding their space debris.”

“China has been closely tracking its trajectory and issued statements on the re-entry situation in advance,” Chunying said. “There has been no report of harm on the ground. China also shares the results of re-entry predictions through international cooperation mechanisms.”

In sum, considering credible observations of the object's trajectory, as well as reports that confirmed unknowns of its descent to Earth before May 9, we rate this claim "true."

This report was updated with information about the rocket debris' reentry into Earth's atmosphere.