A junk news site invented a story about a school principal expelling two children over their religious views. 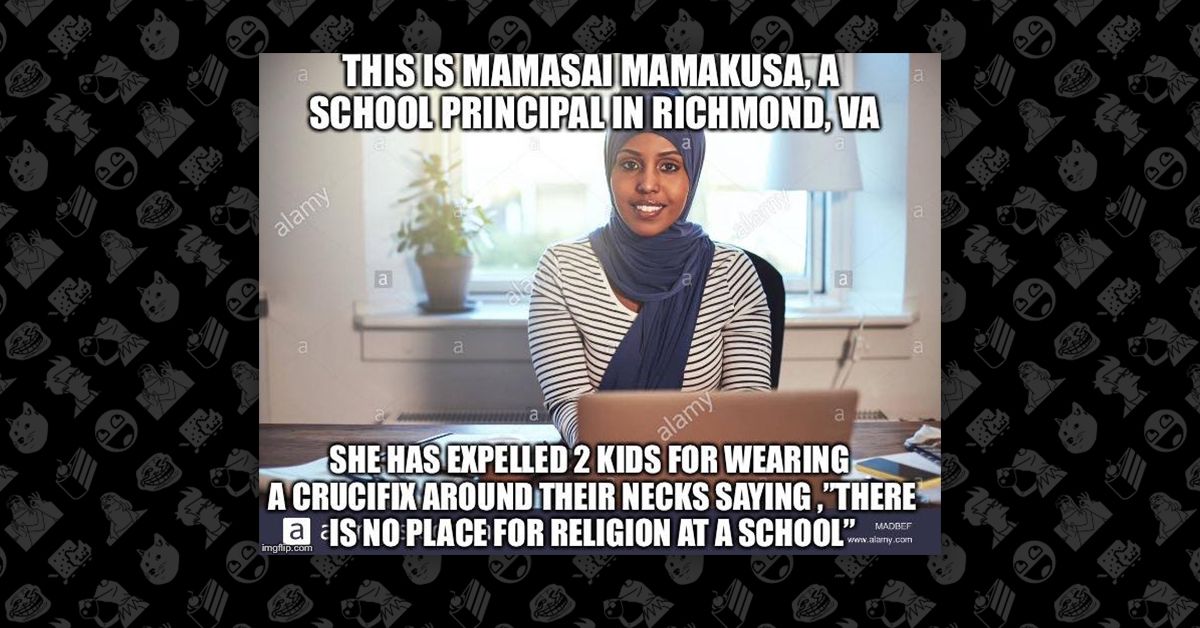 On 30 July 2018, the Facebook page for the website "America's Last Line of Defense" posted a meme comprising a picture of a hijab-clad woman with text identifying her as Mamasai Mamakusa, a school principal in Richmond who expelled two students for wearing crucifixes: This meme does not reflect any real incident taking place at a Virginia school. It was fabricated by
America's Last Line of Defense, which is part of a network of fake news sites dedicated to spreading political misinformation under the guise of proffering “satire." The site's Facebook page contains several nods to the nature of their content, with the "About" section stating that "nothing on this page is real."

This particular meme also contains two rather obvious hints that this story is a piece of fiction and not genuine news.

For one, the watermark of the photo agency Alamy is visible on the meme's image. This image is actually a stock photograph showing a "Smiling young Muslim female entrepreneur wearing a hijab sitting in her home office working online with a laptop," not a Virginia school principal named Mamasai Mamakusa.

The principal's name, too, should clue some viewers in on the meme's attempt at humor. This name is an alternate spelling of a strange but popular lyric heard at the end of the Michael Jackson song "Wanna Be Startin Somethin'":

Jackson borrowed this phrase from a 1972 song called "Soul Makossa." While "Mamasai Mamakusa," or "ma-ma-sa, mako-mako ssa," doesn't have a literal meaning, Irregardless Magazine noted that this lyric was a play on the word "Makossa," a style of music popularized in Cameroon in the 1960s.