Is This a Picture of a 'Cheerleader' Sniper? 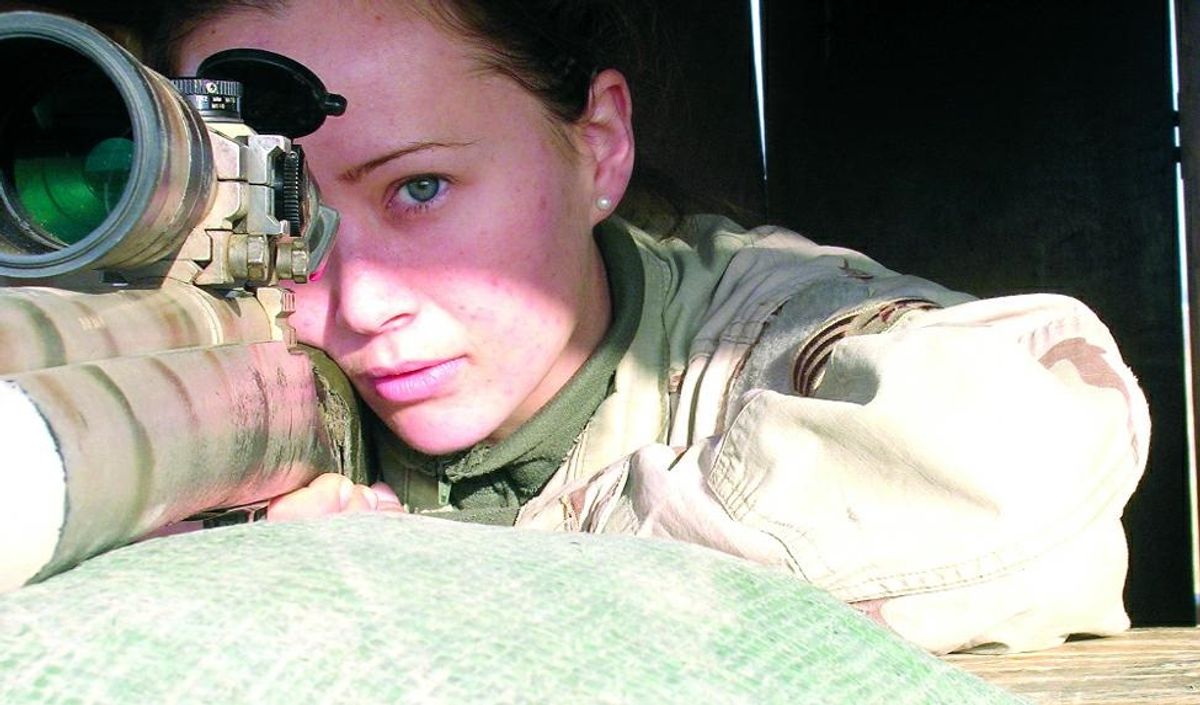 This girl will make someone a fine wife some day!

A friend of mine sent me this picture and told me the female airman is a USAF Security Forces sniper. She was a high school cheerleader and Homecoming Queen and enlisted in the military after her graduation. She qualified very high in marksmanship and was trained as a sniper.

My buddy served with her recently in Afghanistan. He said on Easter day she was watching a road that lead to a NATO military base when she observed a man digging by the road. She engaged the target ... she shot him. Turned out he was a bomb maker for the Taliban and was burying an IED (a roadside bomb) that was to be detonated when a US patrol walked by 30 minutes later. It would have certainly killed and wounded several soldiers.

The interesting fact of this story is the shot was measured at 725 yards. I have trouble seeing that far. She shot him as he was bent over burying the bomb. The shot struck him in the butt blowing into the bomb which detonated. He was blown to pieces.

The Air Force made a motivational poster of her.

The "motivational poster" aspect of the above item was merely a bit of creative fiction inspired by a photograph, but the woman pictured here, Senior Airman Polly-Jan Bobseine, is indeed a Security Forces Squadron fire team member with the U.S. Air Force (USAF).

The original photograph and its USAF-assigned caption are as shown below: Senior Airman Polly-Jan Bobseine, 823rd Security Forces Squadron fire team member, takes aim behind a M-24 Sniper Rifle to hone her close precision engagement skills during proficiency weapons training at a deployed location. Airman Bobseine was chosen out of more than 270,000 enlisted Airmen as one of the Air Force's 12 Outstanding Airmen of the Year.

We don't know whether Senior Airman Polly-Jan Bobseine might ever have been a high school cheerleader or a Homecoming Queen, but a 2006 Air Force biography of her indicated she was home schooled and made no mention of such school positions:

After graduating high school, Airman Bobseine moved to Wyoming where she was employed as a horse wrangler until relocating to Tennessee to train horses professionally before enlisting in the United States Air Force, leaving in March 2003 for Lackland Air Force Base, Texas for basic training. Upon graduation, she volunteered for a special duty assignment to the 823d Security Forces Squadron, Moody AFB, Georgia, arriving in August 2003. Since serving in the unit, Airman Bobseine has completed Army Airborne Training, Air Force Physical Fitness Leadership School, and Army Combat Lifesaver Training. Airman Bobseine was recently selected as the 2005 Air Combat Command Outstanding Flight Level Airman of the Year.