The phrase "in church," as some of the viral memes were captioned, may carry a misleading connotation. 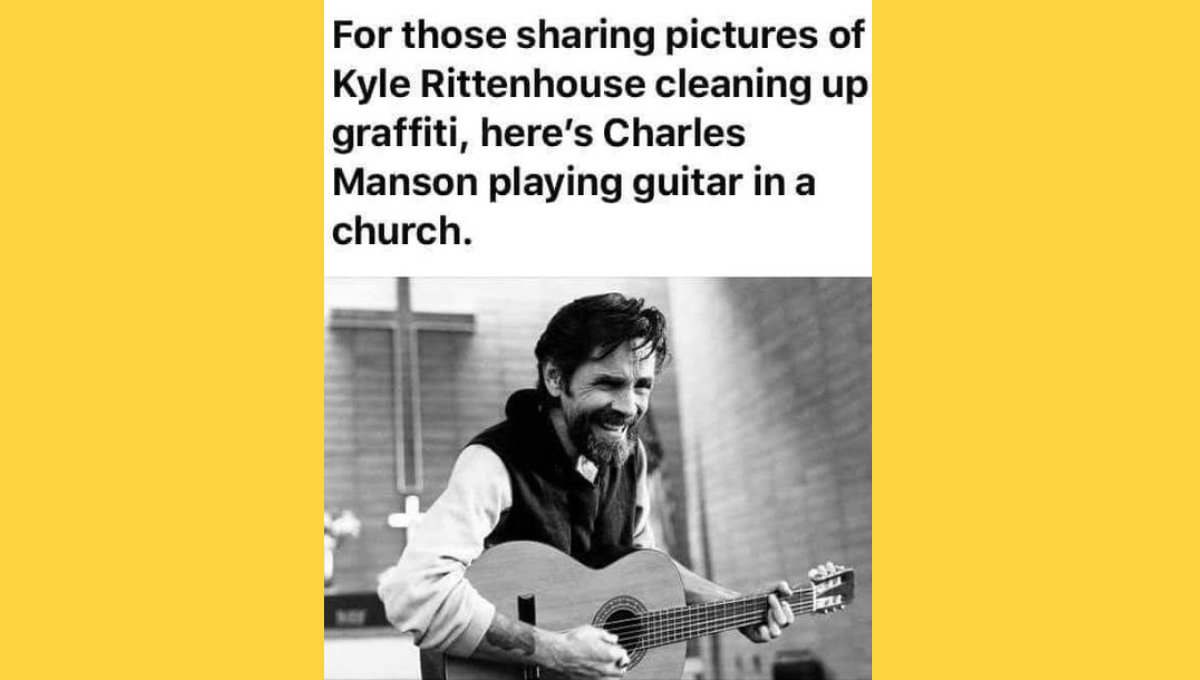 A photograph taken in 1982 shows convicted murderer and cult leader Charles Manson playing a guitar in a place of worship.

The photograph was taken in a prison chapel during a media photo shoot, but it's not accurate to say he was participating in a religious service when the picture was taken.

In late August 2020, social media users began sharing a meme featuring a black-and-white photograph of a smiling, bearded man playing a guitar with a Christian cross visible behind him. The caption read, "For those of you sharing pictures of Kyle [Rittenhouse] cleaning up graffiti, here's a picture of Charles Manson playing guitar in church." It's true that the photograph depicts Manson, the infamous leader of the Manson Family murder-cult. The image was taken in the chapel at California Medical Facility, a state prison in Solano County. Manson was convicted of first-degree murder in 1971 and spent the rest of his life in prison.

Although the image may lead some to assume that Manson was playing music to accompany a religious service, that doesn't appear to be the case. According to the photograph's caption on Getty Images, the picture was taken during a photo shoot at the prison in July 1982 by photographer Neil Leifer.

People shared the above Manson meme to make a sarcastic comparison to pictures published in news stories and social media posts showing double homicide suspect Kyle Rittenhouse cleaning graffiti off a wall in Kenosha, Wisconsin, as if to say that even a notorious murderer like Charles Manson can do good deeds.

The picture of Rittenhouse cleaning graffiti was taken after unrest roiled the city in the wake of the police shooting of Jacob Blake, a Black man shot in the back seven times by a white police officer and left paralyzed.

Rittenhouse has been charged with two counts of homicide and one count of attempted homicide for fatally shooting two people and seriously wounding a third, hours after the graffiti cleaning picture was taken.

Rittenhouse has become a cause célèbre among right-leaning media and personalities. When asked if he would condemn Rittenhouse's actions, U.S. President Donald Trump suggested Rittenhouse appeared to be acting in self-defense.

We rate this claim "Mostly True" because while the image does in fact depict Manson and it was taken in a chapel, it wasn't taken inside an actual church or during services, as some who view the image may be lead to believe.