Do Cedar Waxwing Birds Die When Their Mates Do?

Killing two birds with one ... window? 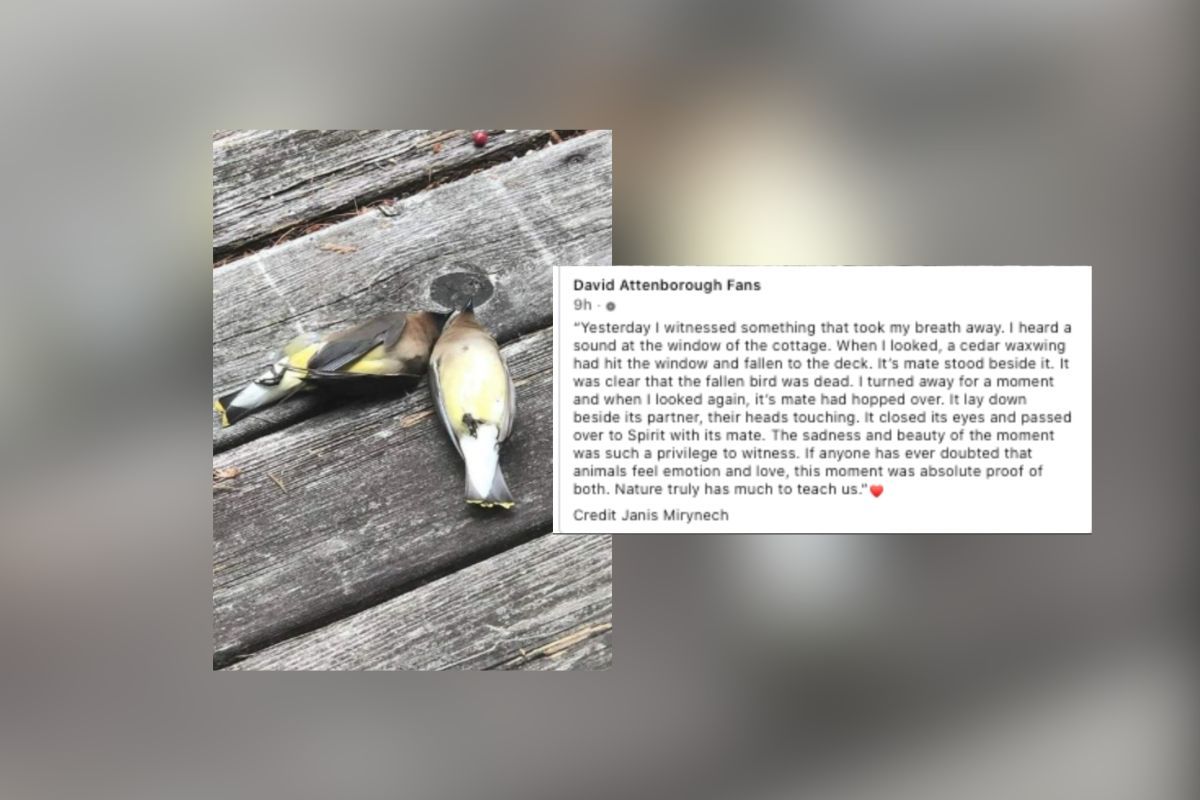 Claim:
Members of the bird species known as the cedar waxwing die when their mates do.
Rating:

In a romantic yet tragic tale, a popular meme shared to social media suggests that a bird species known as the cedar waxwing dies when its mate ceases to breathe. As much as many would like to believe the birds have a Romeo and Juliet-like romance, Snopes spoke with an ornithology expert who said that there is no truth to this far-flung story. The meme, which was sent to our readers from the Facebook group David Attenborough Fans on July 13, 2022, was credited to Janis Mirynech and read:

Yesterday, I witnessed something that took my breath away. I heard a sound at the window of the cottage. When I looked, a cedar waxwing had hit the window and fallen to the deck. It’s [sic] mate stood beside it. It was clear that the fallen bird was dead. I turned away for a moment and when I looked again, it’s mate had hopped over. It lay down beside its partner, their heads touching. It closed its eyes and passed over to Spirit with its mate. The sadness and beauty of the moment was such a privilege to witness. If anyone has ever doubted that animals feel emotion and love, this moment was absolute proof of both. Nature truly has much to teach us.

In San Francisco, the California Academy of Sciences conducts a sampling of “window kills” — that is, when one or more birds die after colliding with a window. Jack Dumbacher, the curator of ornithology and mammalogy at the academy, told Snopes that his team does sometimes find two birds, and in one case three birds, dead together. But there is little to no evidence to suggest that such deaths are anything more than unfortunate run-ins with windows.

Simply put, the double death was likely the result of two birds having been involved in a chance accident, either as potential mates or more likely as rivals.

“During the breeding season, and later in the year when there are young playing and flying about, two birds are often involved in territorial or mate disputes, [as well as] actual or play chases,” Dumbacher told Snopes.

“If the first one flies into the window, the second is usually close behind. Birds often don't die immediately, but sometimes over a couple of minutes or more as they bleed out from trauma or become incapacitated from head injuries. So, I am not surprised that someone might have heard the crash and seen one bird down and the other on the ground catching up to the bird that it was chasing, and then dying beside it.”

Futhermore, Dumbacher adds that he has never heard of any evidence that birds “die in pairs” and added that the description on the social media post was “ridiculously anthropomorphized.”

“I suspect that the sound on the window was one or both birds hitting it and falling to the deck; one likely chased the other,” said Dumbacher.

Cedar waxwings, scientific name Bombycilla cedrorum, are found throughout North America wherever there are berry-laden trees, notes Audubon. Characterized by a yellow tip at the end of their tail and red bands along the edges of their wings, these nomadic birds are also notorious for getting a wee bit drunk on fermented, intoxicating berries. There is the possibility that two birds at once may make a wrong turn resulting from their drunken state, but even that is unlikely.

“Windows kill hundreds of millions of birds each year in America alone. [It’s] probably easier for that person posting to romanticize about lovingly ‘passing over to the spirit world with its mate’ than to think about the fact that their unprotected window just killed two birds,” added Dumbacher.

Birds fly into windows because they see the outdoors reflecting at them, making it appear as though the window offers a clear flight path. At least half of all birds who run into windows will die from their injuries or will be killed by another animal while they were stunned from the shock. To avoid the “thud” of a bird hitting window glass, The Humane Society of the United States recommends making your window obvious from the outside by taping strings, adding external shutters or a window screen, wind chimes, or decals to the window. Inside the building, vertical blinds or shades can be added and lights turned on at nighttime. The Humane Society of the U.S. offers more advice on how to bird-proof a home.