An alarmist rumor misleadingly claimed the CDC was planning to apprehend and detain Americans to administer forced vaccinations. 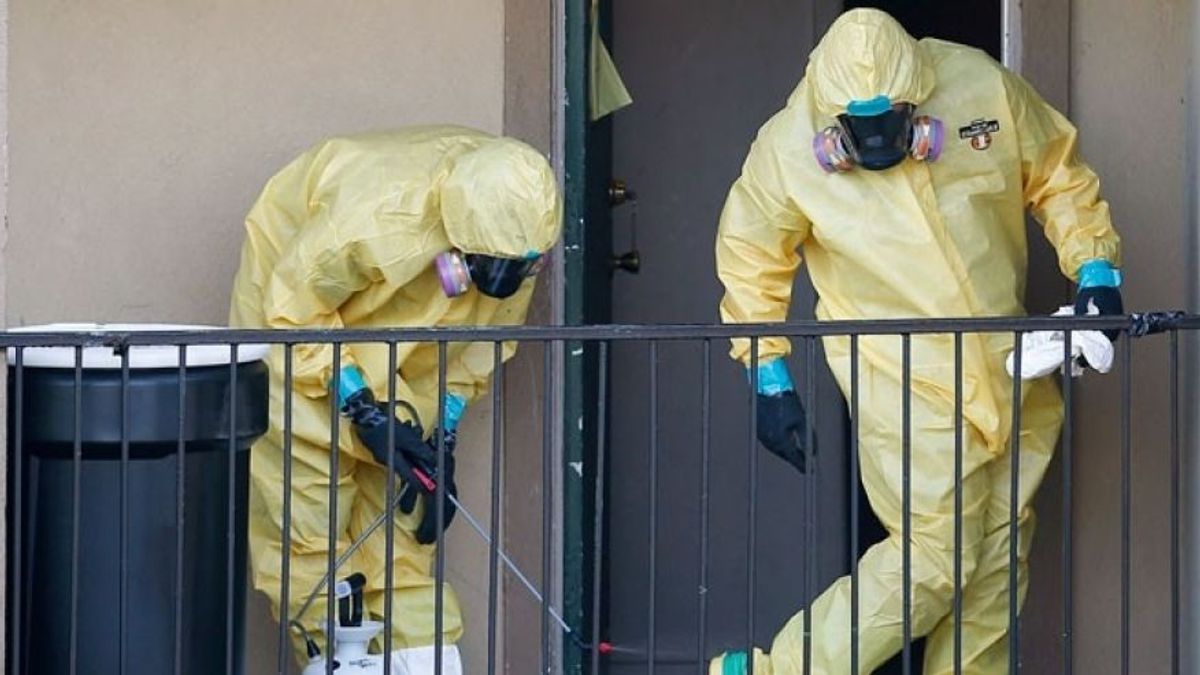 Claim:
The CDC has proposed a new rule enabling the agency to "apprehend and detain anyone, anywhere, at any time, without Due Process or any right of appeal" and "administer forced vaccinations."
Rating:

On 1 September 2016 the web site Red Flag News published an article reporting that the Centers for Disease Control (CDC) proposed a 15 August 2016 rule newly granting the agency the power to apprehend, detain, and vaccinate by force any American citizen.

The article's composition suggested that the CDC had simply sought the power — without limitation — to arbitrarily apprehend, detain, and vaccinate Americans for no apparent reason:

The Centers for Disease Control (CDC) has proposed a "rule" giving them the power to apprehend and detain anyone, anywhere, at any time, without Due Process or any right of appeal, and to hold that person in quarantine for as long as the CDC wants — and no one can refuse them! Editor's Opinion: This is the kind of tyranny that the Second Amendment is designed to protect Americans from.

Based on CDC's 8/15/16 publication of 'Rules for the Control of Communicable Diseases', the CDC is giving itself the power to forcibly apprehend healthy people en masse, and detain them indefinitely with no process of appeal.

"and whether there are any public concerns with the absence of a specific maximum apprehension period in the regulation."
Of course and as would be expected from a totalitarian unconstitutional power grab,

"When an apprehension occurs, the individual is not free to leave or discontinue his/her discussion with an HHS/CDC public health or quarantine officer."
Moreover, the CDC also would like the public's input on the fact their power is not limited to just individual persons but rather they could apprehend entire cities in mass if they so desired:

"the proposed practice to issue Federal orders before a medical examination has taken place. "

CDC sneaks in its unlimited and unchecked authority. They've couched this authority by describing how they "generally" expect it to work in a temporary manner, but they've also clearly stated it is open ended and there is no discussion of due process in the A&D phase (again CDC wants your comments on this fact).

IF an order of isolation, quarantine, or conditional release is issued, the CDC gives those so ordered one chance in the first 72 hours to ask CDC to change their minds, after which unlimited detention is again on the table.

The CDC can stop, detain, and jail you anywhere.

"CDC may enter into an agreement with an individual, upon such terms as the CDC considers to be reasonably necessary, indicating that the individual consents to any of the public health measures authorized under this part, including quarantine, isolation, conditional release, medical examination, hospitalization, vaccination, and treatment; provided that the individual's consent shall not be considered as a prerequisite to any exercise of any authority under this part."

Even though the CDC believes it can force all the above procedures on individuals and groups, it also uses "voluntary agreements" for the sole purpose of making forced actions easier to perform. Anyone breaking these "voluntary agreements", even if they didn't agree to them, is subject to criminal prosecution.

The article referenced by name a 15 August 2016 Notice of Proposed Rulemaking (NPRM) document published to the Federal Register pertaining to updated rule changes proposed by the Department of Health and Human Services (DHHS). That document was prefaced with an section explaining that changes to quarantine regulations were being proposed due to recent outbreaks of communicable diseases (such as Ebola, MERS, and measles) around the world:

Through this Notice of Proposed Rulemaking (NPRM), the Centers for Disease Control and Prevention (CDC) in the Department of Health and Human Services (HHS) is amending its domestic (interstate) and foreign quarantine regulations to best protect the public health of the United States. These amendments are being proposed to aid public health responses to outbreaks of communicable diseases such as the largest recorded outbreak of Ebola virus disease (Ebola) in history, the recent outbreak of Middle East Respiratory Syndrome (MERS) in South Korea, and repeated outbreaks and responses to measles in the United States, as well as the ongoing threat of other new or re-emerging communicable diseases. The provisions contained herein provide additional clarity to various safeguards to prevent the importation and spread of communicable diseases affecting human health into the United States and interstate.

In a section explaining the rationale behind the NPRM, the DHHS specifically stated that it included due process provisions to ensure that individual civil liberties would be well-balanced against proposed measures to protect public health:

[T]his NPRM contains due process provisions (requirements relating to administrative records, quarantine, isolation, conditional release, medical examination, and agreements; authorization for payment for medical care and treatment; and an explanation of applicable criminal penalties) which are intended to inform the U.S. public of what steps HHS/CDC might take to protect public health during an outbreak while safeguarding the rights of the individual. Although these processes have been implemented through internal standard operating procedures, these procedures have not been codified, explicitly set forth in regulation, and made publicly available until today. These provisions are needed to provide transparency and assure the traveling public and any individual potentially placed under a Federal public health order that HHS/CDC will protect their individual liberties.

The provisions in this NPRM describe the regulatory activities that HHS/CDC may undertake to reduce and mitigate the risk of outbreaks of Ebola, MERS, measles, and other communicable diseases in the United States. Greater transparency and public understanding of its processes, authorities, and procedures, will allow HHS/CDC to respond more effectively to these public health emergencies.

The article held that the CDC proposes granting itself the power to "apprehend and detain anyone, anywhere, at any time, without Due Process or any right of appeal, and to hold that person in quarantine for as long as the CDC wants." However, 42 U.S. Code § 264, originally codified in 1944 and updated several times throughout the years, already grants the federal government authority to take necessary measures (including the apprehension of individuals) in order to prevent the spread of communicable diseases:

The Surgeon General, with the approval of the Secretary, is authorized to make and enforce such regulations as in his judgment are necessary to prevent the introduction, transmission, or spread of communicable diseases from foreign countries into the States or possessions, or from one State or possession into any other State or possession. For purposes of carrying out and enforcing such regulations, the Surgeon General may provide for such inspection, fumigation, disinfection, sanitation, pest extermination, destruction of animals or articles found to be so infected or contaminated as to be sources of dangerous infection to human beings, and other measures, as in his judgment may be necessary.

Regulations prescribed under this section may provide for the apprehension and examination of any individual reasonably believed to be infected with a communicable disease in a qualifying stage and (A) to be moving or about to move from a State to another State; or (B) to be a probable source of infection to individuals who, while infected with such disease in a qualifying stage, will be moving from a State to another State. Such regulations may provide that if upon examination any such individual is found to be infected, he may be detained for such time and in such manner as may be reasonably necessary.

The same rumor focused heavily on "forced vaccines" supposedly to be imposed upon any American abritrarily plucked off the street as part of a mandatory "agreement" with such persons. However, the NPRM defined those agreements in the context of a severe outbreak of communicable disease, as a measure upon which conditional release from quarantine or isolation might be predicated. No portion of the NPRM described vaccinating isolated or quarantined individuals without their consent (although it allowed for restricting the movement of such individuals during a public health emergency):

This proposed provision allows HHS/CDC to enter into an agreement with an individual, upon such terms as HHS/CDC considers to be reasonably necessary, indicating that the individual agrees to any of the public health measures authorized under this part, including quarantine, isolation, conditional release, medical examination, hospitalization, vaccination, and treatment; provided that the individual's agreement shall not be considered as a prerequisite to the exercise of the CDC's authority under this part.

HHS/CDC believes that the availability of agreements is an important tool to obtain an individual's compliance with public health measures and as a means of building trust with the individual. An agreement, for instance, may be used in circumstances where an individual agrees to comply with the instructions of public health staff, such as to not engage in travel, limit social contacts, or remain in home quarantine. An agreement will typically include a statement indicating the individual chooses to enter into the agreement on a voluntary basis, without duress or coercion, and with full knowledge of the facts and circumstances of his/her individual case. Individuals who decline to enter into such agreements will not face criminal or other penalties for not entering into such agreements.

It should be noted that in the U.S., forced quarantine or isolation is considered an extreme measure and is typically undertaken by individual states, not by federal agencies such as the CDC. (The latter only provides guidelines that states may use in deciding when quarantines are called for.) In fact, the recent NPRM was prompted (in part) by a nurse who filed a lawsuit against New Jersey Governor Chris Christie and then-Commissioner of Health Mary O’Dowd for detaining her as part of a mandatory quarantine for anyone returning from specified West African countries who had treated patients with Ebola, and who successfully challenged attempts by the state of Maine to quarantine her:

Kaci Hickox, the Doctors Without Borders nurse whom New Jersey forced into quarantine after she treated Ebola patients in West Africa, [has] sued Gov. Chris Christie for allegedly imprisoning her against her will.

Christie had "no medical epidemiological or legal grounds to hold me," Hickox said.

Hickox treated Ebola patients in Sierra Leone before she returned to the United States on Oct. 24, 2014. She was held in a quarantine tent in New Jersey for a little more than three days before she was released to Maine, her home at the time — which also sought to quarantine her.

But Hickox defied Maine's government, winning a court order that she could come and go as she pleased as long as she submitted to monitoring for infection by the deadly virus.