Was CBS 'Caught' Passing Off 'Latinos for Trump' as Biden Supporters? 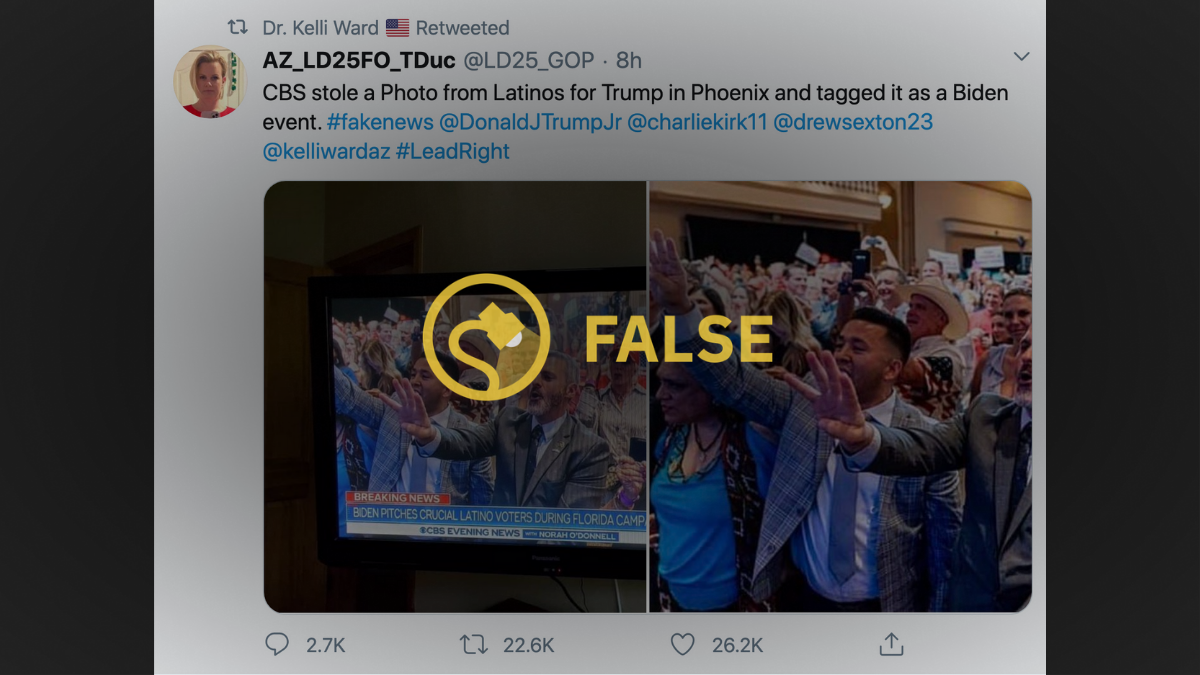 In September 2020, conservative commentators claimed to have uncovered damning evidence of journalistic dishonesty and partisan bias on the part of "CBS Evening News" by claiming that the network had taken a photograph of Latino supporters of U.S. President Donald Trump, and with wanton disregard for the truth, presented it to their viewers as an illustration of Latino support for Trump's Democratic opponent Joe Biden.

On Sept. 16, 2020, Arizona businesswoman Tracy DuCharme, who describes herself as a field organizer for the Trump Victory Committee, posted two similar images to Twitter along with the caption: "CBS stole a Photo from Latinos for Trump in Phoenix and tagged it as a Biden event. #fakenews" The two images from DuCharme's tweet can be viewed separately here and here.

The claim that CBS had misleadingly presented Trump's followers as Biden's was further promoted by Brad Parscale, a senior adviser to the president's reelection campaign; Kelli Ward, chairperson of the Arizona Republican Party; and Drew Sexton, Arizona state director for the Trump Victory Committee.

DuCharme's tweet formed the basis of a subsequent article on the unreliable right-wing conspiracy website Gateway Pundit, whose headline read, "Fake News CBS Caught Using Photo From Latinos For Trump Event in Phoenix and Tagged [sic] it as Biden's Florida Event," and a similar piece on the website Red State Nation.

That claim was false. It relied on the juxtaposition of two factors: the use, by "CBS Evening News," of a still image from a "Latinos for Trump" event in Phoenix, Arizona; and the chyron (or caption) at the bottom of the screen in that moment, which read "Biden Pitches Crucial Latino Voters During Florida Campaign Stop."

The photograph was authentic. It was taken in Phoenix, Arizona, on Sept. 14, 2020, by Associated Press photographer Andrew Harnik with the caption: "Supporters react as President Donald Trump speaks at a Latinos for Trump Coalition roundtable at Arizona Grand Resort & Spa ..."

The screenshot from "CBS Evening News" was also authentic, and apparently undoctored. It originated in the Sept. 15, 2020, episode of the program, which can be watched in full here. The chyron can be seen throughout the segment in question, which is available to watch, below:

DuCharme's claim was that CBS had, through its use of the chyron, presented the photograph as depicting a Biden event, but that omitted one crucial element of any television news segment — audio.

During the report, CBS correspondent Ed O'Keefe was, in a voiceover, discussing concerns among Biden supporters that his campaign had not done enough grassroots outreach among Latino voters in Florida, and that the Trump campaign had been doing more. At the moment when the Phoenix "Latinos for Trump" photograph shows up on screen, O'Keefe says: "The president has cut into Biden's advantage by wooing conservative Latinos ..."

So "CBS Evening News" actually used the "Latinos for Trump" photograph for the exact opposite reason to the one falsely claimed by DuCharme and others: It showed up at a point in the report when O'Keefe was mentioning Trump's support among Latino supporters — an entirely appropriate usage of that photograph.

A considerable degree of irony exists in the fact that the false claim that CBS misrepresented the photograph by taking it from its original context, was itself perpetrated by taking the screenshot from the "CBS Evening News" report, and removing it from its proper context by stripping away the voiceover narration.

It's true that the chyron "Biden Pitches Crucial Latino Voters During Florida Campaign Stop" remained present at the bottom of the screen during the moment in question, but it causes no confusion when viewed in its proper context, along with the voiceover. It's also standard practice for the same chyron to remain present throughout the course of a cable news segment, even if it doesn't describe or relate to each and every image shown.

For example, it could hardly be reasonably claimed that "CBS Evening News" engaged in dishonesty by having the chyron at the bottom of the screen while the following image of Trump showed up, on the basis that the image showed Trump, and not "Biden pitching to Latino voters": After this fact check was published, Gateway Pundit completely overhauled their article, changing the headline to "Trump’s Cut into the Hispanic Vote Leaves Democrats Panicked," removing DuCharme's tweet and stripping away any substantive mention of the CBS Evening News segment until the final line in the revised article, which read: "CBS News had to use a photo from a Trump rally because virtually NO ONE was at Joe Biden’s Latino event!"

Despite the radical edit to the article, and the substantially reduced word count, Gateway Pundit still managed to mislead readers with that claim. CBS News was not forced to use a photo from a Trump rally because a comparable Biden event had been poorly attended, the network used the "Latinos for Trump" photograph because, as we have made clear, they were illustrating Trump's support among Latinos during that portion of the report.

Red State Nation.  "Fake News – CBS Stole A Photo From Latinos For Trump In Phoenix And Tagged It As A Biden Event."   16 September 2020.

Updated [17 September 2020]: Added details about the Gateway Pundit's revision to its original article.