Ben Carson and the 'Nut of the Mind'

A statement ostensibly uttered by Ben Carson about the 'nut of the mind' holding our 'most hated memories' is fake. 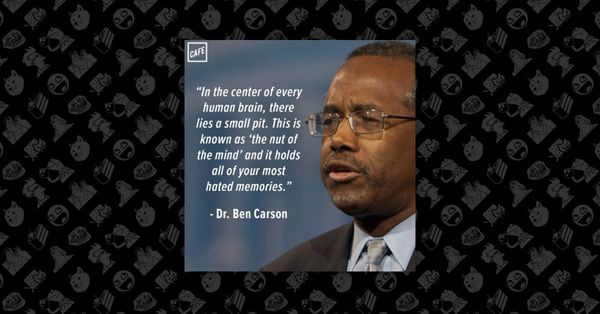 Claim:
Ben Carson spoke of a 'nut of the mind' where hated memories are stored.
Rating:

An image graphic featuring a picture of HUD Secretary Dr. Ben Carson along with a quote ostensibly uttered by him about a portion of the brain called the "nut of the mind" where "hated memories" are stored was circulated on social media in March 2017: This image does not reflect a genuine statement made by Dr. Carson. It originated with an article published by the entertainment web site Cafe.com on 8 March 2017 which featured six other faux "quotes" from Ben Carson:

7 Incredible, Inspiring, and Incandescent Ben Carson Quotes About The Brain

Famed neurosurgeon Dr. Ben Carson hopes to bring his incisive surgical skills to the Department of Housing & Urban Development. Well, if these quotes are any indication, he’ll be just fine.

Cafe.com is an entertainment web site that does not traffic in genuine news items. Although the web site does not carry a disclaimer explicitly labeling its content as fiction, they do drop a few not-so-subtle hints about their humorous nature:

CAFE is the only place where people read and watch things on the internet. The pieces we’ve created about news & politics have changed the very nature of our existence as a species.

The web site, which used the slogan "The news ... Roasted," also released a video explaining "What is Cafe?" The video doesn't offer much of an explanation, however, and simply showed various politicians laughing: