Did Cargo Ship 'Draw' a Penis Before Getting Stuck in Suez Canal?

Some may classify getting stuck in the Suez Canal as a dick move. 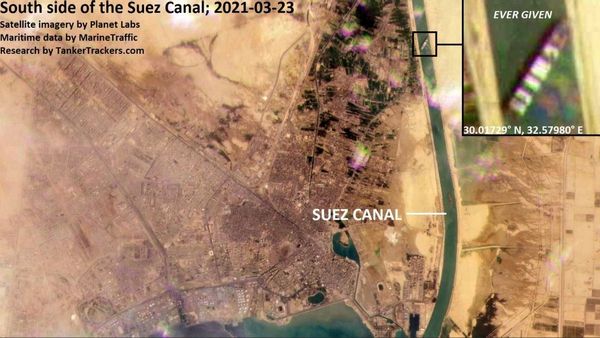 Claim:
An image showing the route of the Ever Given cargo ship before it got stuck in the Suez Canal resembled a crude drawing of a penis.
Rating:

This is a genuine image showing the route of the Ever Given cargo ship as it waited its turn to enter the Suez Canal. However, as of this writing, there's no evidence that this ship intentionally took this route in order to make a funny GPS drawing.

On March 23, 2021, shipping traffic through Egypt's Suez Canal was grounded to a halt after a large vessel called the "Ever Given" got stuck in the passageway. Shortly after news broke about this blocked shipping route, an image started to circulate on social media that supposedly showed how the Ever Given, a nearly 200-foot wide, 224,000-ton vessel, had "drawn" a penis in its route movements shortly before it entered the Suez Canal: This is a genuine image showing the Ever Given's route before it got stuck in the Suez Canal. While it may resemble a rough drawing of a penis, there's no evidence to indicate that this was "drawn" on purpose.

The image comes from a video created by the vessel-trafficking service provider VesselFinder.com. The video shows the movements of the Ever Given as it waited for its turn to enter the Suez Canal. Vessel Finder wrote:

On the occasion of the disputed incident of the ultra-large container ship Ever Given blocking the Suez Canal, the VesselFinder team made a video simulation of the movements of the ship in more detail, for some time before it got stuck in the canal and blocked the main artery of cargo flow between Asia and Europe.

While some social media users may have been skeptical of this image, thinking that it was just a crude joke, a spokesperson for Vesselfinder.com confirmed to Vice that the route was genuine, adding that "there is no room for some kind of conspiracies or false data."

Another map from the ship-tracking website Myshiptracking.com also shows the Ever Given's seemingly NSFW route.

CNN reported on March 24 that eight tugboats were working to free the vessel, but that it could be days before the Suez Canal, one of the world's busiest shipping routes, returns to normal traffic levels:

Eight tug boats are working to free a large container ship stuck in Egypt's Suez Canal, halting marine traffic through one of the busiest and most important waterways in the world.

The rescue boats are working to float and release the Ever Given, a 59-meter-wide (193.5-feet) vessel that ran aground after 40-knot winds and a sandstorm caused low visibility and poor navigation, the Suez Canal Authority said in a statement Wednesday.

The 224,000-ton vessel, sailing under a Panama flag, was en route to the port of Rotterdam in the Netherlands when it was knocked off course.