Did Caravan Migrants Demand $50K from the U.S. to Return Home?

A small group of migrants awaiting their fate in Tijuana asked that they either be allowed into the U.S. to process their asylum claims or be paid to go home. 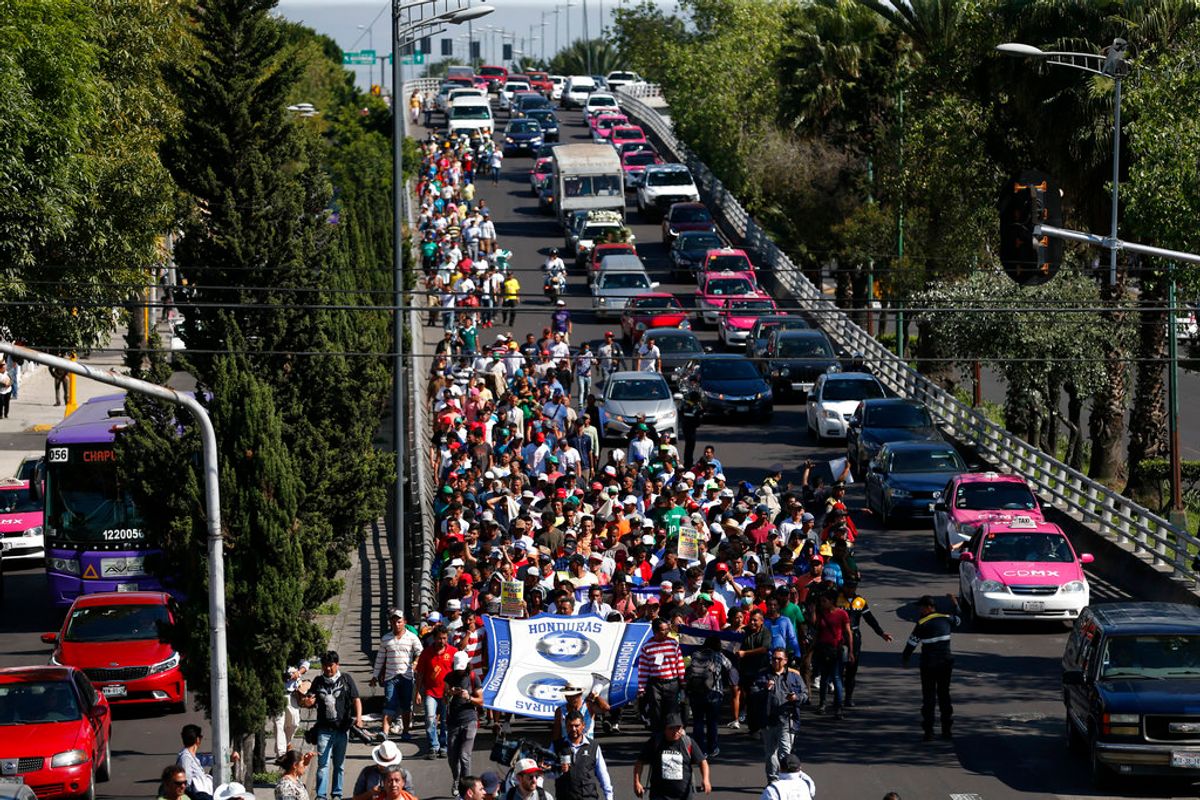 A small group of migrants marched to the U.S. consulate in Tijuana and demanded that their asylum claims be processed more quickly or that they be given $50,000 each to return home.

The vast majority of migrants waiting to have their asylum claims processed by the United States had nothing to do with this demand.

On 12 December 2018, Fox News reported that a group of Central American migrants currently housed in Tijuana, Mexico, and hoping to present asylum claims to the United States had demanded $50,000 each from the Trump administration in exchange for returning home.

Although the group that made the demand was relatively small (100-plus people out of a total of the roughly 3,000 housed at El Barretal migrant shelter), the outrageous-sounding headline captured most readers' attention: "Migrant group demands Trump either let them in or pay them each $50G to turn around."

The Fox News report was aggregated from the work of the San Diego Union-Tribune, which had earlier that day reported that:

The first group demanding action, numbering about 100, arrived at the U.S. Consulate at about 11 am. The migrants said they were asking that the Trump Administration pay them $50,000 each or allow them into the U.S.

When asked how the group came up with the $50,000 figure, organizer Alfonso Guerrero Ulloa of Honduras, said they chose that number as a group ...

[A] second letter, delivered around 1:20 p.m., came from a separate group of caravan members asking for the U.S. to speed up the asylum process. Specifically, the group asked U.S. immigration officials to admit up to 300 asylum seekers at the San Ysidro Port of Entry each day.

Currently, officials admit between 40 and 100 asylum seekers. The group of migrants say the slow pace violates American and international laws that call for an immediate process, and places vulnerable migrants at risk.

The Union-Tribune reported that the group demanding money in exchange for turning around and going home was organized by Alfonso Guerrero Ulloa, a 54-year-old Honduran who sought political asylum in Mexico after being accused (falsely, he maintains) by the Honduran government of planting a bomb in a Chinese restaurant that injured six U.S. soldiers and a civilian in 1987.

Ulloa joined the caravan in early November 2018 and viewed it as something of a political cause, according to the Union-Tribune:

[Ulloa] led a group of 100 migrants to the U.S. Consulate in Tijuana asking President Donald Trump to either let the migrants into the United States or oust [Honduran President Juan Orlando] Hernandez from office and pay each migrant $50,000 to go back to Honduras. He based that figure on what he considers reparations from the U.S. for their intervention in Central America.

The Trump administration has sought to require that Central American migrants apply for asylum in the “safe third country” of Mexico rather than in the U.S. According to the Union-Tribune, roughly 2,500 have already done so, but humanitarian groups -- including the international medical charity Médecins Sans Frontières (MSF) -- maintain that Mexico (still a developing country) is not safe for many of them, with women, children, and members of the LGBT community particularly vulnerable to violence in Mexico:

MSF medical data shows that a quarter of our medical consultations for migrants and refugees in Mexico are related to injuries from intentional violence. Ninety per cent of our mental health consultations are related to violence. Our patients are suffering from anxiety, depression, and post-traumatic stress disorder, among other conditions, which have severe consequences on their ability to function. Women, children, and members of the Lesbian-Gay-Bisexual-Transgender-Queer (LGBTQ) community are more vulnerable to certain types of violence and require specific protection measures that are not effectively in place in Mexico.

The migrants arrived in Tijuana roughly one month before the Fox News report. As they traveled north in a caravan that originated in northern Honduras on 12 October 2018, they were a constant target of hoaxes and misinformation, particularly in the lead-up to the 6 November 2018 midterm elections in the U.S.

Solis, Gustavo.   "The Man Who Demanded $50,000 for Each Honduran Returning Home Plans a Liberation Movement From the Migrant Shelter."     San Diego Union-Tribune.   12 December 2018.