A photograph of a family resting in front of a tent labeled “Cruz Roja Mexicana” has, somehow, been presented as evidence that the American Red Cross provided caravan tents. 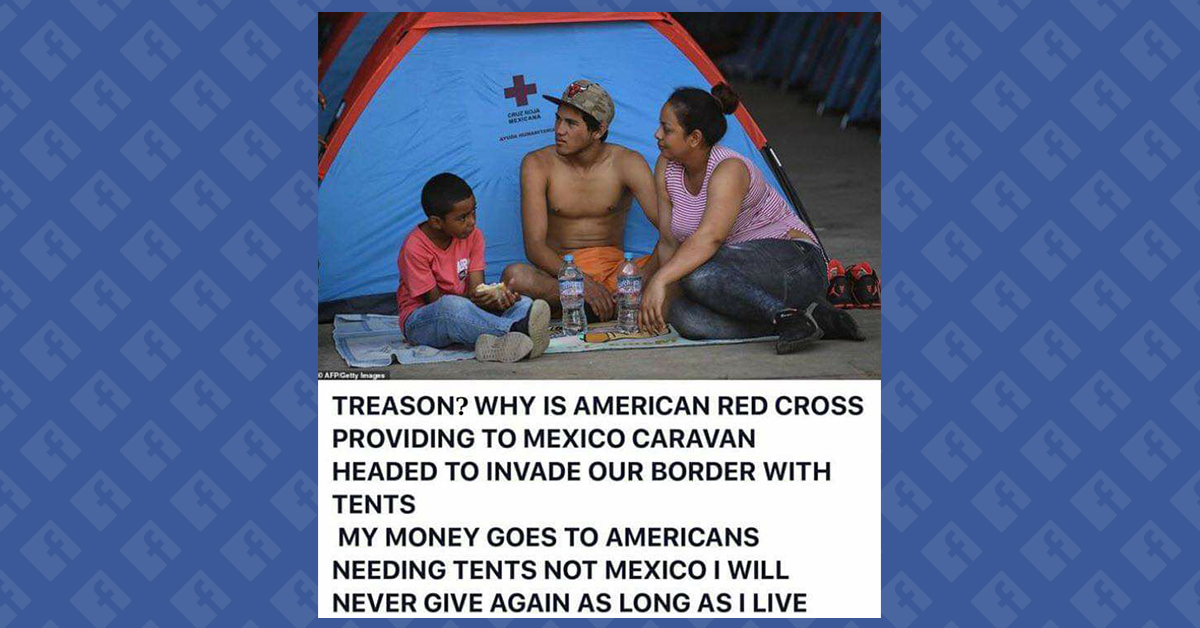 Claim:
A photograph shows a family of Honduran caravan members resting in front of a tent provided by the American Red Cross.
Rating:

On 26 October 2018, a photograph of Honduran migrants in front of a Mexican Red Cross tent was shared as part of a torrent of anti-immigrant and anti-caravan memes, with the suggestion that the American Red Cross committed treason by allegedly supplying these refugees with shelter: Similar memes have appeared on Twitter with the same implication, despite the fact that the tents are all labeled (in Spanish) “Mexican Red Cross.” The picture was taken on 22 October 2018 and described by Getty Images as showing Honduran caravan members resting in an arena set up on the fairgrounds of the International Mesoamerican Fair in Tapachula, Mexico:

According to the International Red Cross (and consistent with the identifying material on the tents), humanitarian efforts relating to the caravan are being carried out by the Red Cross Societies of Honduras, Guatemala and Mexico, and not the United States:

The Honduran Red Cross is accompanying people at the beginning of their journey, providing first aid and water and support to restore family links.

The Guatemala Red Cross is providing pre-hospital care, clean water and ambulance services and is helping people restore family links on the route from Esquipulas to Chiquimula. They have established a medical post on the Guatemala border with Mexico.

The Mexican Red Cross has established medical and hydration posts on the Mexican side of the border with Guatemala. In addition, more than 40 volunteers have been deployed along with a mobile clinic to provide pre-hospital care, first aid and support to restore family links.

“We are especially concerned about the health and humanitarian needs of this wave of people on the move,” said Walter Cotte, the Regional Director of the Americas for the International Federation of Red Cross and Red Crescent Societies. “Red Cross volunteers across Central America are accompanying them along their journey, providing medical care and reuniting families. It is imperative that the dignity and security of families are safeguarded, and that they are kept together.”

Memes suggesting that the American Red Cross is providing tents to caravan members do so on the presumption that the United States is the only country in the world with a Red Cross society. It is not.