A woman claimed that her brother's Captain America costume was deemed "offensive" by school officials, but details of the incident conflicted with that claim. 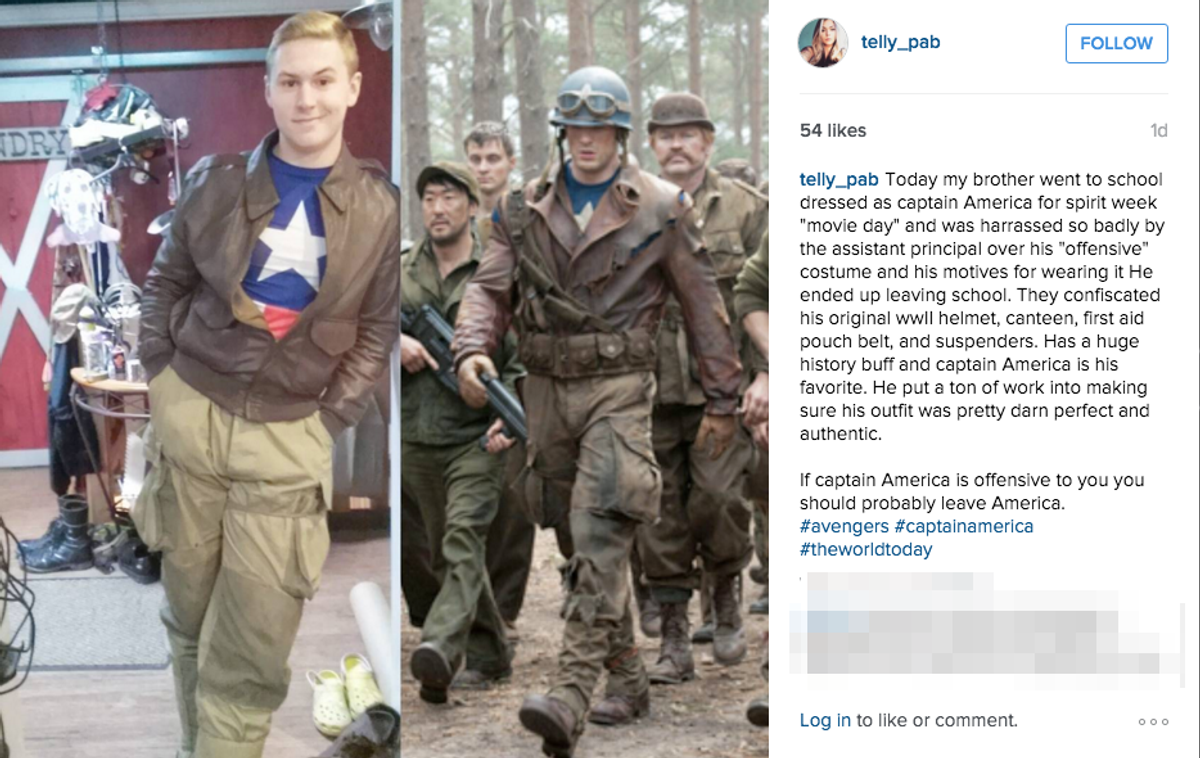 Claim:
A high student was forced to leave school because an assistant principal found his Captain America costume to be "offensive."
Rating:

The school deemed a Captain America costume (or patriotism in general) to be "offensive."

On 8 February 2016, Facebook user "Keli Marie" published the above-reproduced image and comment to Facebook and Instagram. According to her post, her brother had dressed as Captain America for a school movie day during "spirit week" and "was harrassed so badly by the assistant principal over his 'offensive' costume and his motives for wearing it" that he opted to leave school early.

Keli Marie's comments omitted a number of crucial details about the specifics of her claim, such as when and where the incident occurred, what the purportedly "harassing" actions of the assistant principal were, and the circumstances under which the depicted young man left campus without incurring penalties for cutting classes. Others users commenting on the photograph indicated that the school in question was Rondout Valley High School in Accord, New York and pointed out that school "spirit week" typically took place around the September/October timeframe, not February.

The post also provided no explanation about why a Captain America costume would have deemed "offensive" by the school's vice-principal (or anyone else), although some commenters inferred that a lack of patriotism was the source of the administrator's purported ire:

That vice principal. Spread his name in shame over the internet
Kick his commie ISIS loving ass out of our country.
Exercise your First Amendment rights that he despises and protest outside his front door.
I cant believe this. This must be a scam post

An IHeartRadio blog identified the young man in question as Rondout Valley High School senior Steven Snyder and provided a bit more information obtained from Snyder's sister. Among the details that were not included in the original, more popular, post were information about a violation of school rules involving contraband and a possible date for the incident (8 February 2016):

What I know as of now is his assistant principal called him into the office and used a prior time involving WWII gear to harass himabout his attire Monday. We somewhat understand his belt being a problem, it was empty and though to the general public it just looks like cargo pockets it is a WWII surplus belt used for many things including ammunition so we understand it is weapon related. However there was no reason for taking his helmet (the best answer given was it was real metal and hard), suspenders, or canteen. He was also made to show/empty his pockets and show and explain the shirt under his jacket (an under armor captain America shirt). He's a senior and a good kid who really does embody the ideals of Captain America.

This statement shed a bit more light on the situation: the young man had apparently locked horns with administrators over the his "WWII gear" before, and the items confiscated evidently looked like weaponry.

We contacted Rondout Valley High School for additional information on the claim, and Superintendent Rosario Agostaro returned our call on 10 February 2016. Agostaro stated that he was well-acquainted with the student in question, repeatedly describing him as a "good kid" and relaying information about instances in which Snyder behaved admirably.

However, Agostaro told us that the district had received several threats during the 2015-2016 school year and as a result was forced to adopt a stringent policy with respect to weapons and ammunition. Agostaro said that the teen's costume wasn't of the modern Captain America type: it was a replica of a uniform used in World War II-era scenes in one of the Captain America films and included a replica ammunition belt that violated school policy concerning weapon-related items on school grounds.

As for the other parts of the costume, Agostaro said he was not sure what items were initially confiscated from Snyder, but he affirmed that all the student's possessions had been promptly returned to him. He also confirmed that no disciplinary measures were taken against Snyder (at the time of the incident or later); if Snyder left school during class hours, it wasn't because he was ordered to go home.

So while it might be fair to say that the teen's Captain America-related costume was deemed inappropriate school wear, it was not because any school administrators were offended by the Captain America character or the sense of patriotism he represents. The administrator involved with the issue described himself as a big Captain America fan and confirmed that the sole problem with Snyder's costume was its inclusion of a replica ammunition belt.