Can You Unlock Your Car Door with a Tennis Ball?

If opening locked cars were this easy, no vehicle would be secure. 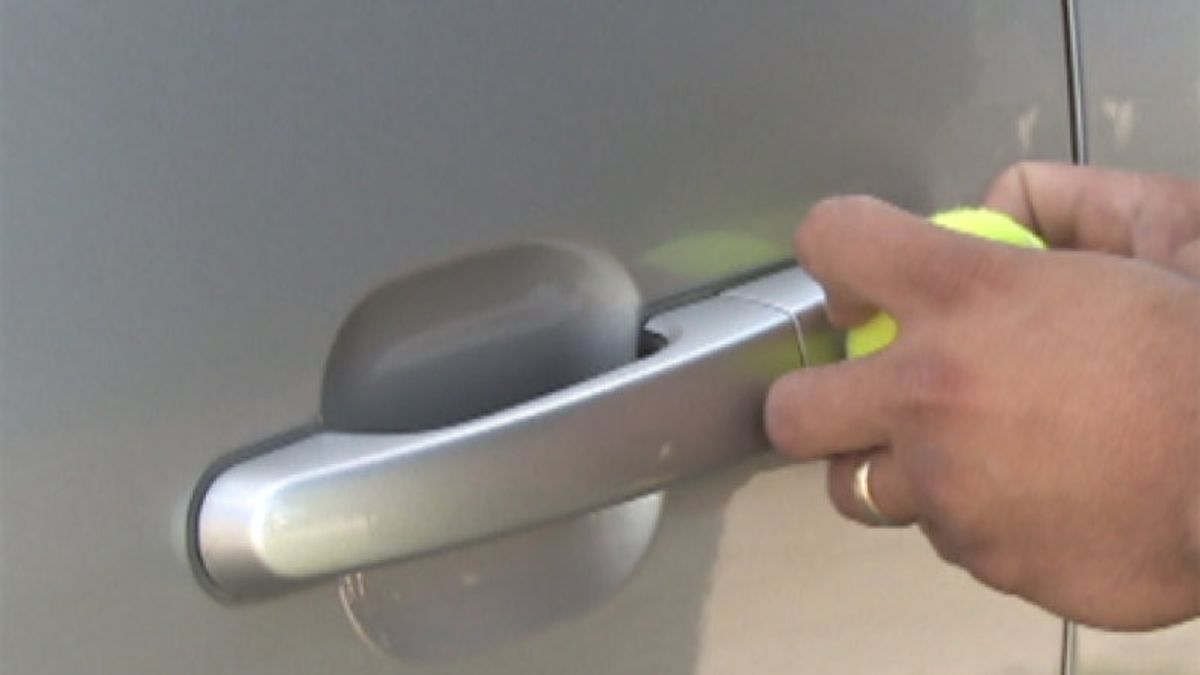 Claim:
You can unlock your car door using a tennis ball.
Rating:

In February 2016 social media users began sharing videos and articles displaying an interesting (but not new) claim, holding that motorists could unlock their car doors using just a tennis ball:

One of the most frustrating things you can do is lock your keys in your car. You know you do it almost the second it happens. Your options are pretty much limited to calling a tow service to come unlock it (with someone else's phone of course, because your is locked in the car), trying to use a coat hanger, because that almost never works anyway, or get a ride home to get the other set of keys in your locked house.

If none of those sound appealing, you might want to give this a try. Take a tennis ball, puncture a small hole in it. Place the hole of the ball over the keyhole and using both hands, press the ball very hard. The air inside the ball forces the locking mechanism open and your car becomes unlocked.

An immediate red flag of nonsense was apparent if readers clicked through to view the embedded video on YouTube, which was prefaced with the clause that the advice was intended for "innocent women only":

The video showed a vehicle being locked with a key fob before advising female viewers on how to make a "magic" tennis ball for lost keys. The clip instructed women to keep the ball in their purses at all times (instead of just an extra set of keys) and explained how the hack purportedly worked: Given that this clip was circulating as early as 2007, its claims rendered the entire prospect of locking one's vehicle moot. If unlocking any car were as simple as making the equivalent of a universal master key by burning a hole in a tennis ball, unscrupulous thieves needed only to invest in a can of tennis balls to break in to any and all cars at their leisure. Yet in the years since 2007, car break-ins haven't hugely increased.

Subsequent versions of this hack focused on the "crime warning" aspect to a small degree, such as one published to the unreliable web site iLyke that bizarrely oscillated between "valuable life hack" and "breathless safety warning" in a post that both effusively recommended and warned against the purportedly useful tennis ball hack:

There's nothing worse than locking yourself out of your car. You likely recall that moment of horror which washes over you once you realize what you have done.

Now comes the fun part. You can screw around with a coat hanger and try to jimmy open the locking mechanism, you can walk miles back to your home to try and find some spare keys. Or you can try to borrow a phone (because you naturally left yours in the car) and call a tow service.

All of these options pretty much suck.

But this next option, is actually the best of them all. Beware, criminals have been using this technique for years.

The rumor's perennial popularity (despite its falseness) has likely hinged on the number of users who pass it along "just in case" or to be "better safe than sorry" without ever having tried it themselves (much like a similar car door lock hack of equally dubious merit has circulated widely for roughly the same reasons).

In 2007 this rumor made it to the attention of Discovery Channel's MythBusters, who addressed it in a brief web video titled "Tennis Ball Car Unlock MiniMyth." In that clip, the team attempted to replicate the results based on the "air pressure" explanation proffered in the video. When the tennis ball method predictably failed, they attempted to unlock a vehicle using much higher air pressure applied in the same fashion, but even that approach proved insufficient for opening a locked vehicle:

Like many fan requests sent to the MythBusters, the question of whether you can unlock a car with a tennis ball came straight from a viral video on the Web.

MythBusters Kari Byron, Tory Belleci and Grant Imahara took a shot at the tennis-ball trick with different sized holes in tennis balls but failed to pick any locks. In case the air pressure inside the tennis balls simply wasn't sufficient, they even tried vacuum-sealing the car lock and applying 100 psi of air pressure (about nine times the normal atmospheric pressure) to it.