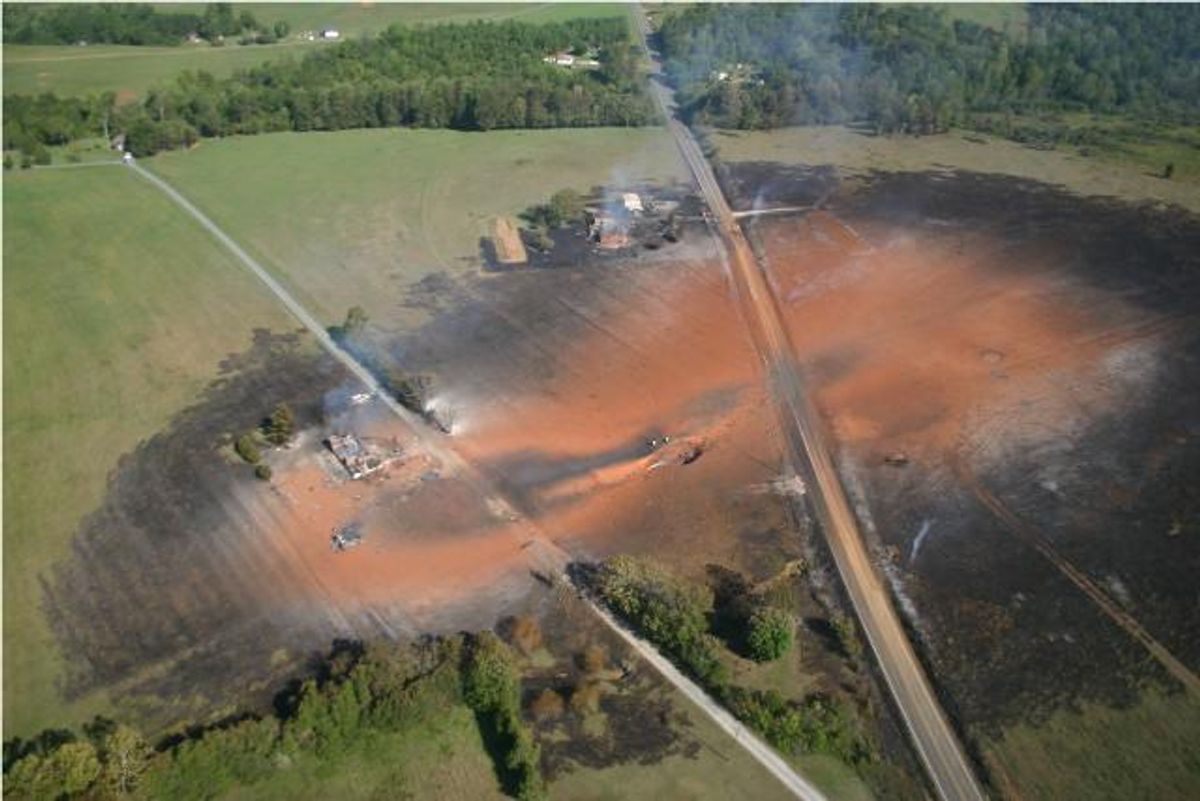 A series of photographs originally circulated online in January 2009 supposedly show the aftermath of a backhoe operator who started digging without following proper safety procedures and struck a high pressure gas main:

If we learned one thing from working at the utility company it is this ... call before you dig!!

These pictures would make you think twice before jumping on a backhoe and starting to dig!! It might even make you nervous about plowing after seeing that!

It doesn't say where this was but judging from the red dirt — it was somewhere from the central part of the U.S. to the south.

This is what a high pressure gas main is capable of. These pictures do document the aftermath of a gas pipeline rupture, but the mishap was not caused by a backhoe operator who failed to follow proper procedure.

The pipeline rupture and subsequent explosion occurred on the morning of 2008 near Appomattox, Virginia, as described by the Lynchburg (Virginia)

That pipeline failed just before 8 a.m. on The natural gas it released blew into a fireball that scorched an area in diameter, leveled two homes and injured five people, according to preliminary findings in the federal investigation. Some were damaged in the blast,

The pipeline failure was not caused by a backhoe (or any other equipment or object) piercing the line and rupturing it, but as a result of corrosion that had not been detected during the gas company's periodic safety inspections:

Outside corrosion caused the rupture and subsequent explosion of a natural gas pipeline just north of the town of Appomattox.

The analysis of Williams Gas Company's pipeline showed that the thinning wasn't fully captured by the tools used to examine the pipes in service, said John Batchelder, a pipeline integrity expert with the company.

"In the life of this pipeline, the coating became compromised," he said. "The rocks in this ditch make it very difficult to protect this area."

The in-line inspection tool, run on the pipeline earlier [in the] year, showed that the pipe, as it crossed just north of the town, showed some corrosion, but not enough to mark it for immediate repair. Its neighboring two pipelines had repairs in the same area recently.

"The initial results did not identify the corrosion as being as deep as it was," Batchelder said. "This area has a unique signature of corrosion. It stretched the limits of the technology."

Additional photographs of the scene can be viewed on the web site.