Is the 'California is a Shithole' Starterpack Accurate?

The "starterpack" picture appeared to be first posted to the Joe Rogan subreddit in February 2022. 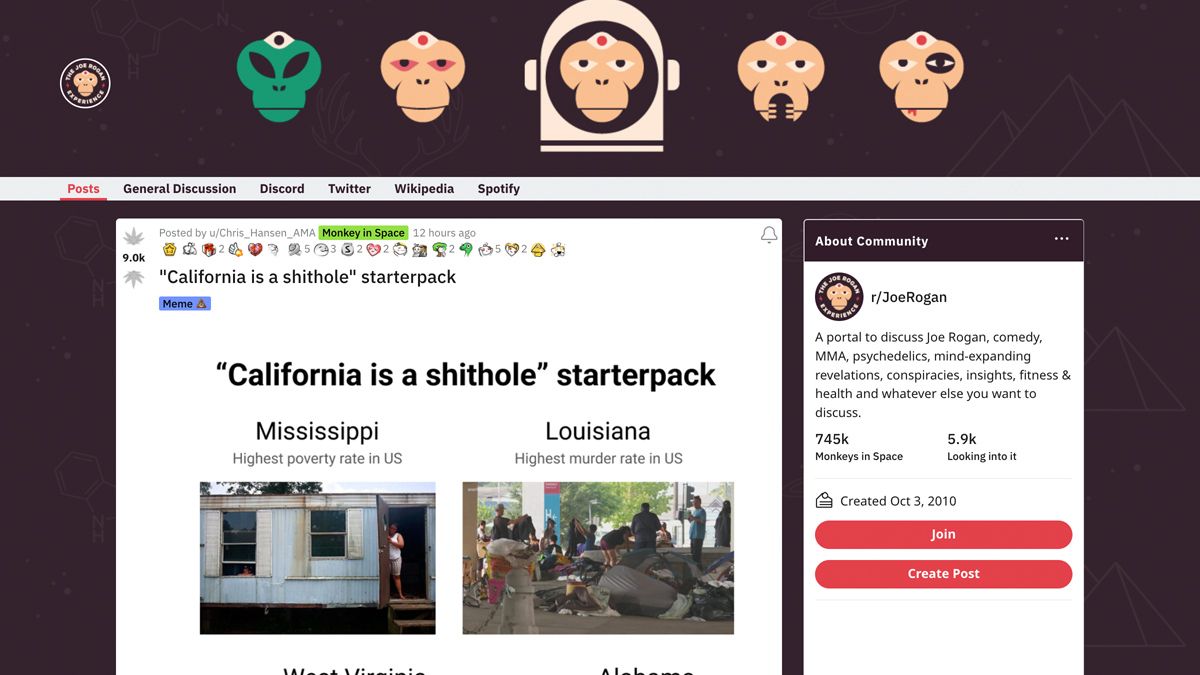 The Joe Rogan subreddit on Reddit posted a California is a shithole starterpack and it included Mississippi, Louisiana, West Virginia, and Alabama. (Image Via r/JoeRogan on Reddit)

Claim:
A "'California is a shithole' starterpack" picture designed to mock Southern contempt for the state shows accurate photographs and data for Mississippi, Louisiana, West Virginia, and Alabama.
Rating:

On Feb. 15, 2022, a picture with the headline "'California is a shithole' starterpack" was posted to the r/JoeRogan subreddit on Reddit. The post was given dozens of awards that were bought with Reddit coins, a currency that can be purchased with real money.

The subreddit serves as a forum for discussion of The Joe Rogan Experience podcast and everything else in Rogan's world. Apparently, the picture was meant to defend the state of California from people living in other states who might make fun of it. The four featured states were Mississippi, Louisiana, West Virginia, and Alabama. While some of the data and photographs included in the picture were genuine, we soon found that it was also partially miscaptioned.

First, the caption accompanying the photograph for Mississippi read: "Highest poverty rate in U.S." According to a 2021 article from U.S. News & World Report, this was true. The story used data from the 2019 American Community Survey from the U.S. Census Bureau.

However the photograph was not taken in the state of Mississippi. According to Getty Images, it was captured in 2009 in Fluker, Louisiana.

According to the "California starterpack" picture, Louisiana had the "highest murder rate in the U.S." We found conflicting reports on worldpopulationreview.com and in U.S. News & World Report that showed the state with the highest murder rate to be either Mississippi or Louisiana.

The photograph was a screenshot from a video report by WWL-TV that was captured in Metairie, Louisiana.

The claim for West Virginia was that it was the "least educated state." According to a WalletHub study that was reported by WTRF-TV on the same day the Reddit post went up, this claim was true.

However, the photograph that represented West Virginia in the picture on the r/JoeRogan subreddit was not captured in the Mountain State. After a little digging, we found it on Getty Images: A homeless encampment made of tents and tarps lines the Santa Ana riverbed near Angel Stadium in Anaheim, California, January 25, 2018. (Courtesy: ROBYN BECK/AFP via Getty Images)

It was taken "near Angel Stadium in Anaheim, California" in 2018. So basically the creator of the "'California is a shithole' starterpack" accidentally included a picture of homelessness in California.

The last block in the Reddit picture was for Alabama. It said that state had the "highest childhood poverty rate." However, we did not find this to be true. According to USA Today, Alabama had the sixth highest child poverty rate as of 2019. We were unable to find more recent data specifically for poverty rates in children.

And the accompanying photograph of a shirtless man sitting in front of an old trailer home was captured in West Columbia, West Virginia, not Alabama. It appeared to have been shot by photographer Stacy Kranitz, Time's pick for Instagram Photographer of the Year in 2015.

In sum, the "'California is a shithole' starterpack" picture posted to the r/JoeRogan subreddit did not contain wholly accurate information and photographs. For this reason, we have rated it as "Miscaptioned."