A lack of workers willing to shuttle K-12 students to and from school is impacting school districts nationwide. 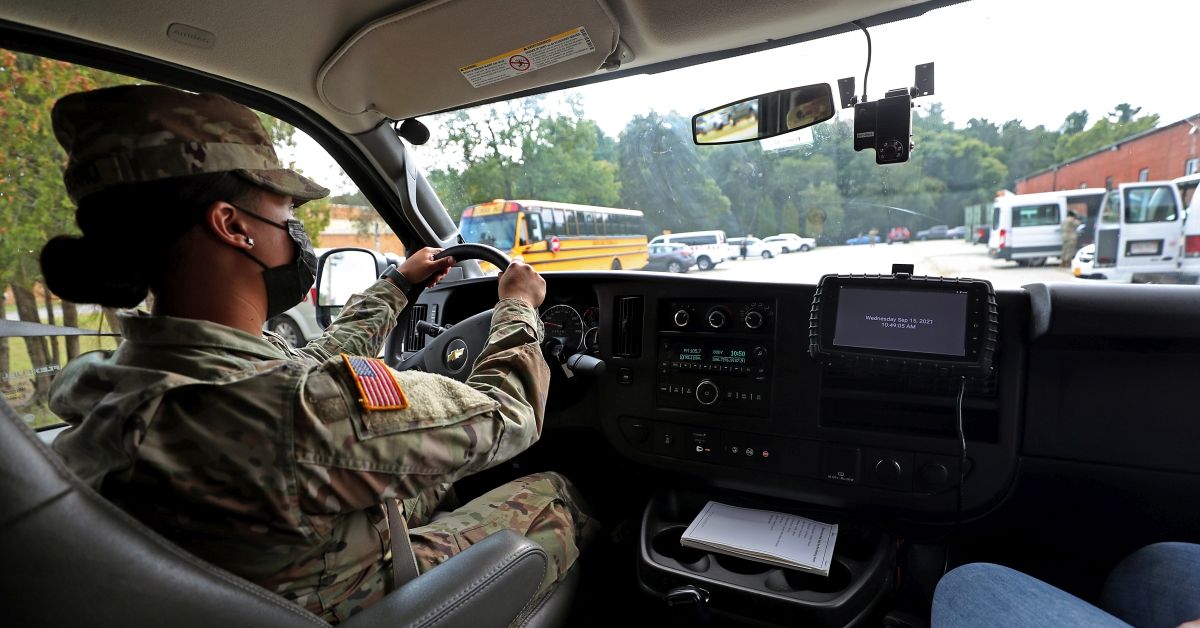 In September 2021, numerous reports surfaced claiming that a shortage of school bus drivers in Massachusetts forced state officials to deploy National Guard troops to take over the responsibility of getting K-12 students to and from school. The reports were true. On Sept. 13, 2021, the Massachusetts National Guard and state's education and public safety departments said in a joint news release obtained by Snopes:

Governor Charlie Baker today will activate the Massachusetts National Guard in response to requests from local communities for assistance with school transportation as the 2021-2022 school year gets underway in the Commonwealth. The Governor’s order makes up to 250 personnel available. Beginning with training on Tuesday, 90 Guard members will prepare for service in Chelsea, Lawrence, Lowell, and Lynn.

These Guard personnel will be available to serve as drivers of school transport vans known as 7D vehicles to address staffing shortages in certain districts.

In other words, the release said Gov. Charlie Baker ordered 90 National Guard members to prepare to take students to and from schools in four cities north of Boston, and dozens of more members to stand by in case they're needed.

Once trained, National Guard members would use so-called "7D vehicles" for the trips, the release stated. Those vehicles are transport vans that, according to state regulators, have a maximum of 11 seats — including the driver.

Soon after issuing the news release, Baker told reporters the federal government would reimburse the state (like many expenses incurred during the pandemic) for the cost of deploying National Guard troops for the job, though he did not share an estimated price tag, The Boston Globe reported.

“Obviously the goal here is to try to make sure if we have vehicles, we put people on them who are qualified to drive them and do what we can to make sure kids can get to school,” he said, according to that newspaper. At that time, more than 190 members had completed a driver's certification process to legally operate the 7D vehicles, and another 40 National Guard members were preparing to "provide operation support for the mission," the release said.

Considering that evidence, we rate this claim "True."

The Massachusetts cities impacted by Baker's directive are among numerous districts nationwide grappling with a shortage of drivers to shuttle students to and from school — a problem worsened by the COVID-19 pandemic.

However, while the staffing issue isn't new to the 2021-2022 school year, the labor shortage across many sectors and the pandemic’s lingering effects have made it worse — since about half the workforce was over 65 and more vulnerable to COVID-19, Joanna McFarland, who leads a ride-service company that tracks school bus issues, told The Associated Press (AP).

A national survey of 1,500 school officials administered by a group of transportation associations in summer 2021 echoed that sentiment. More than half (51%) of the survey's respondents described their district's bus driver shortage as “severe” or “desperate," and more than three-quarters of participants indicated that the problem was worsening.

Overall, the bus issue has had a range of impacts on students and their families in September 2021, a compilation of news articles and government records showed.

For instance, in addition to National Guard members taking the wheel on some Massachusetts streets, a Boston high school teacher said some of his students took a party bus with a stripper pole and neon lights to and from a field trip on Sept. 17 because their original charter bus fell through, MassLive.com reported.

Furthermore, in Rochester, New York, a lack of bus drivers forced officials to do remote instruction instead of in-person classes, according to Buffalo's TV mews station, WGRZ.

And in Chicago, public school district officials provided parents $1,000 stipends to pay for Ubers, Lyfts, or other forms of transportation since dozens of bus drivers quit, in part, over COVID-19 vaccine requirements, CBS Chicago reported. Some other districts experiencing the problem are located in Delaware and Pittsburgh.

Dan Redford, of the bus service company First Student, told the AP that some drivers in Helena, Montana, quit before the start of the school year due to mask requirements on buses. “I know I’ve had a lot of drivers that don’t believe in that and don’t want to have to deal with that,” Redford said.

In attempt to attract more drivers in the future, districts across the country are offering hiring bonuses and hourly pay increases, among other incentives, according to the AP. And spokespeople for bus systems in at least two regions — a Michigan school district and suburban Salt Lake City — said such steps worked to get more applications.

This report was updated to include state officials' Sept. 17 announcement to expand the effort.