Did 79 Die in a Bridge Collapse While Watching a Clown's Stunt?

"It was just a mad publicity stunt, but as the clown and his geese paddled downstream, the supports of a suspension bridge buckled." 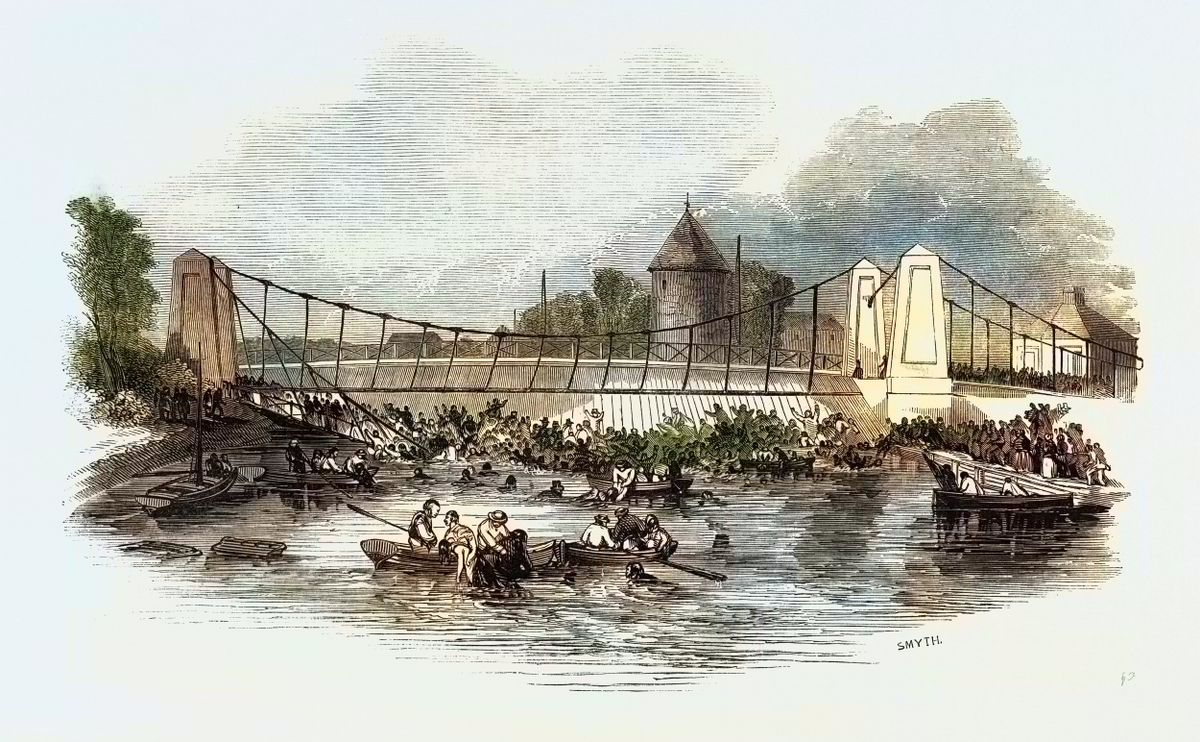 Fall of the Suspension Bridge, at New Yarmouth, on Friday, May 2, 1845. (Photo by: Sepia Times/Universal Images Group via Getty Images)

Claim:
On May 2, 1845, 79 people died after the Yarmouth suspension bridge collapsed in Great Yarmouth, England, as they watched a circus stunt involving a clown in a bathtub being pulled by four geese.
Rating:

On Sept. 23, 2022, a curious Reddit post on the r/todayilearned (TIL) subreddit took off like a rocket and quickly made its way to the website's front page. Its title read, "TIL that in 1845, 79 people died in a bridge collapse that happened because a large crowd had gathered to watch a clown in a bathtub be pulled up a river by four geese." According to historical records, all of this was true.

The Liverpool Echo recounted the old story in 1959. The newspaper headline read, "The Goose Ride to Tragedy," and called the incident "the maddest publicity stunt of 1845." We also looked to original reporting from Jackson's Oxford Journal, which was published within days of the tragedy.

The setting for this story was on the River Bure in Great Yarmouth. The seaside town is on the east coast of England, about a three-hour drive from London.

It all happened on a Friday night. On the evening of May 2, 1845, a crowd gathered to see an act known as "Mr. Nelson," who was a clown with William Cooke's circus. The stunt, which was promoted on a large flyer, consisted of the clown sitting in a bathtub in the river and being pulled by four geese. One flyer appeared to indicate that Cooke would portray the role of the clown. The idea sounded innocent enough.

The promotional flyer said, "Forget it not! Come one! Come all! 'A merrier man within the limits of becoming mirth, I never spent an hour's talk withal.' - Shakespeare." (Source: Wikimedia Commons)

Unfortunately, as the clown performed the act with the geese, the Yarmouth suspension bridge collapsed under the immense weight of hundreds of people. Some 400 spectators were reported to have fallen into the water. Just as the Reddit post said, 79 people died, with 51 of them being children under the age of 14.

We transcribed some of the original reporting from Jackson's Oxford Journal, which was published eight days after the incident on May 10:

In the afternoon of Friday, Nelson, the clown at Cooke's Circus, proceeded to perform a feat which has excited some attention, both in London and the provinces, since it was first introduced by the late Mr. Usher, swimming in a washingtub drawn by four geese. He was to start from the drawbridge on the quay, and go to the suspension bridge, which was erected on the site of an ancient ferry, near the Bure, and opened on April 23, 1829.

Thousands of spectators were collected to witness this spectacle; and the bridge, which has recently been widened four feet beyond the chains, for the accommodation of foot passengers proceeding to and from the railway station (with which the bridge afforded the only means of communication, except by a ferry) was crowded.

As the clown approached, all the persons flocked to the south side of the bridge, and the effect was to flatten the crown of the bridge so perceptibly that it was noticed from the shore. Before any warning could be given – before an alarm could be made, a crack was heard; one after another rails and chains gave way; the south side of the bridge fell down, hanging nearly perpendicularly to the water, and all its occupants, men, women, and children, were precipitated, those in the background being literally pitched over the heads of the foremost ones, into the Bure.

The effect of the shock on the spectators that lined both sides of the river was electrical. A wild shriek rent the air, but the sufferers were mute. An eyewitness affirms that they shrieked, spoke not – engulfed in the yawning waters they were heard no more. The wild cry of agony was succeeded by the most active efforts to rescue the sufferers. Almost the first saved were between 20 and 30 young girls, who were taken to Mr. Franklin's, the Vauxhall Gardens, where every attention that humanity could suggest was shown them. The boatmen exerted themselves with energy, and brought many to land; and whilst there were a good many in whom the breath of life was still vivid, the greater number were inanimate corpses.

The accident took place about 10 minutes or a quarter after six o'clock, and before eight, 53 dead bodies had been conveyed to the Norwich Arms public house; others were taken to the Admiral Collingwood and to the Swan; and many to their own houses. The process of dragging was continued as long as a gleam of light remained, and renewed early in the morning. Before seven o'clock on Saturday, 90 bodies had been found and brought to shore.

Several acts of gallantry were performed. Two men, named Smith and Creake, swam about and saved several persons. The son of Mr. Sloman, the bookseller, was one of those immersed in the water. A gallant fellow, whose name could not be ascertained, who was also one of those who fell from the bridge, having extricated himself from the sinking throng, took young Sloman under one arm, and another child under the other, and succeeded in reaching the shore – saving both. A poor woman, who, with her child, was thrown from the bridge, supported her infant by holding its clothes with her teeth, and thus having her hands at liberty, she providentially got clear from the sinking bodies, and reached the shore in safety. Another poor creature was not so successful. She was found with a child, three years old in her arms, and firmly grasping another. All were dead! One man, in the act of falling, snatched at the bridge, and grappling it, hung fast. A woman got hold of his feet, and he told her to hold on. She was rescued, and he ultimately fell into the stream, but was saved.

The original reporting said that the mass-casualty event caused Cooke, the man responsible for the stunt with the clown, bathtub, and geese, to experience "a very deep feeling of distress." The story also described perhaps upwards of 94 people were initially believed to have died. That number was later reduced to an official count of 79 deaths.

The newspaper article from 1845 also included these eyewitness accounts, which we have transcribed to make them searchable on the internet:

A youth, named J. B. Thorndike, deposed that he was on the suspension bridge when the accident took place. He stood in the carriage way, and in about the center of the bridge. He heard a cracking noise, and observed that one of the connecting links had broken, the ends of the severed link being about two inches apart. He did not apprehend any danger from what he saw. There was, however, a sudden rush to the Yarmouth shore; but several persons laughed, and then ran back to their places. To the best of his belief five or ten minutes elapsed between that time and the time when the bridge fell, when he, with others, was immersed in the water.

By the Foreman. – "I had been on the bridge about five minutes before I heard the crack. It was crowded with people. There were a great many persons upon it, but they were not so thick as I have seen them. I should say they were about four deep. The bridge was not half full. Sufficient time elapsed between my first observing the link break and the bridge falling for everyone upon it to have gone off. I saw more persons on the bridge by a good many upon the occasion of the prisoners who were lately accused of what was called 'the Yarmouth murder' returning from Norwich after their acquittal."

Some 114 years later, the Liverpool Echo published a 1959 column that shed more light on the full outcome of the investigation into the disaster. The cause of the tragedy, beyond the immense weight of the hundreds of people who had gathered on the bridge to watch the clown and geese, was found to have been a "welding defect":

Tales of miraculous escapes were told at the inquest. One man fell across a piece of iron that had mercifully wedged itself into the bank, so that his head was above water. Grabbing two girls struggling nearby, he hung on to them until all three were saved.

One mother seized her child's clothing in her mouth as she and her daughter were catapulted into the river. Breaking surface, she laboriously paddled both to safety. Wherries rescued others so near exhaustion that they had insufficient strength to raise themselves out of the water.

The inquest's final verdict found a welding defect responsible for the tragedy and condemned the inferior materials and labour used to build the bridge only 16 years earlier as not being to the standards specified in the original contract.

Of Cooke, the circus owner, and Nelson, his clown, nothing further is known. But ironically, the handbill announcing the "grand gala night" was prefaced with the words, "Is it to be a Benefit or Not? That is the Question."

Great Yarmouth has no doubt of the answer.

Around 168 years after the deadly accident, BBC.com reported in 2013 that a memorial had been erected to remember the lives that were lost.

In sum, it's true that, in 1845, 79 people tragically lost their lives after a bridge collapsed in Great Yarmouth during a gathering to watch a clown in a bathtub be pulled by geese.

Barnegatsailor. “TIL That in 1845 79 People Died in a Bridge Collapse That Happened Because a Large Crowd Had Gathered to Watch a Clown in a Bathtub Be Pulled up a River by Four Geese.” r/todayilearned via Reddit.com, 23 Sept. 2022, www.reddit.com/r/todayilearned/.

“The Goose Ride to Tragedy.” The Liverpool Echo and Evening Express via Newspapers.com, 23 Feb. 1959, https://www.newspapers.com/.