Is the Brendan Fraser 'I Like the Steak' Autograph Real?

Actor Brendan Fraser is known for his roles in "The Mummy," "Encino Man," and "George of the Jungle." 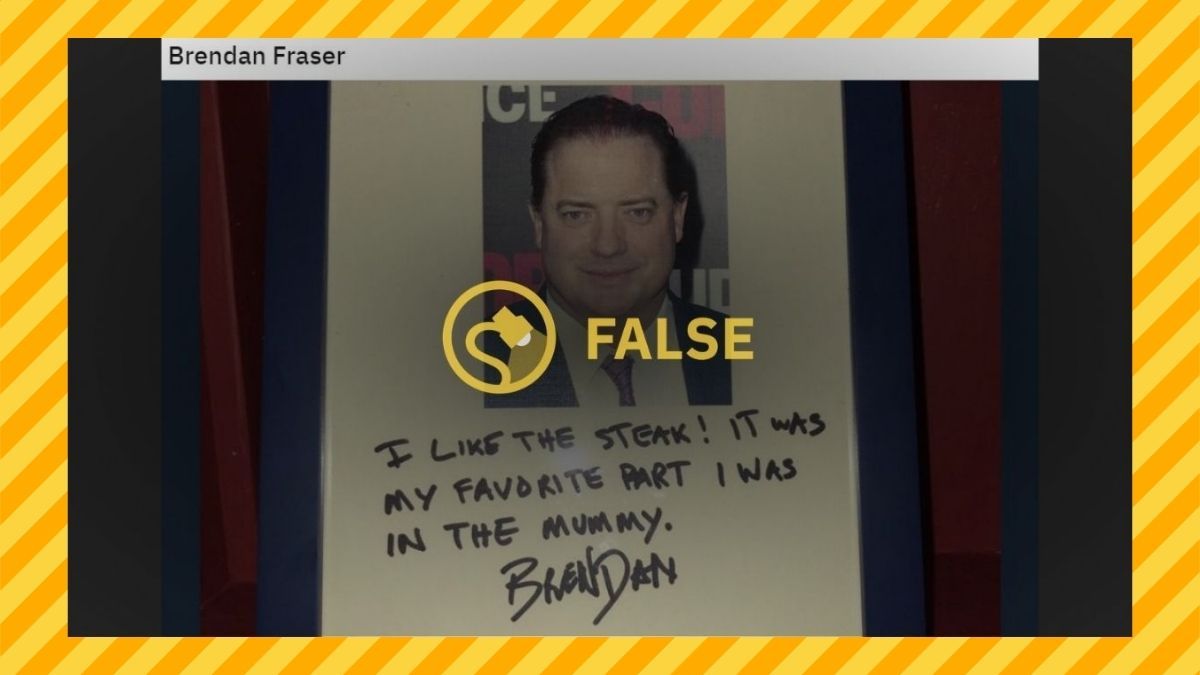 Claim:
An image shows a genuine autographed photo from actor Brendan Fraser that reads: "I like the Steak! It was my favorite part I was in the Mummy."
Rating:

A common sight along the walls of Italian steakhouses are signed photographs of the various celebrities who have dined at these establishments. One popular version of this trope that frequently circulates on social media involves actor Brendan Fraser and the seemingly odd note he left at one restaurant, stating "I like the steak! It was my favorite part  I was in the Mummy." While Fraser was in "The Mummy," and while it wouldn't be unusual for a main course to be someone's favorite part of a meal, this is not a genuine autograph from the actor.

This fauxtograph was on display at a bar in New York City called Mister Paradise. The image first went viral in 2019 after someone saw this framed picture at Mister Paradise, presumed it was real, and then shared it on social media. Shortly afterward, Will Wyatt, the owner of the bar, clarified to Mel Magazine that this was not a genuine autograph from Fraser.

“I just wrote a really dumb thing and fake-signed it ... I hope Brendan Fraser doesn’t think someone is trying to rip him off.”

Mister Paradise had at least two other fake signed photos on display: One of singer Frank Sinatra and another of actor Laurence Fishburne. You can see this photos at Mel Magazine.

While it might not be quite as funny as the fake "I like steak" autograph, we did find a real autograph from the "Encino Man" that includes a few humorous touches. The following image shows an autograph Fraser signed while aboard the "Song Of Flower" cruise ship circa 2007. In addition to signing his name, Fraser also labeled what he was eating — caviar, and what he was drinking — vodka.

The following photograph was posted to Flickr in 2007 by Poppy Amopola. The woman in this photograph appears to be Diva Amapola, a singer who was performing on the cruise ship during Fraser's stay. Amapola talked about Fraser in a 2007 interview:

Q: In your travels you met many famous entertainers. Is there a one or two that really impressed you?

A: Movie Star Brendan Fraser was impressive. We met through his parents onboard the ms Song Of Flower. We did not know who he was (we had our own world onboard the ship and we were often uninformed about Hollywood) and so he relaxed and enjoyed himself. Still he gave me a few autographs and now he is a huge star. His parents knew he was going to be a mega star, and after we spent a few more times with him, we knew why. He has looks, talent and drive. How can he miss?