Does This Video Show a Thwarted Mother's Day Robbery? 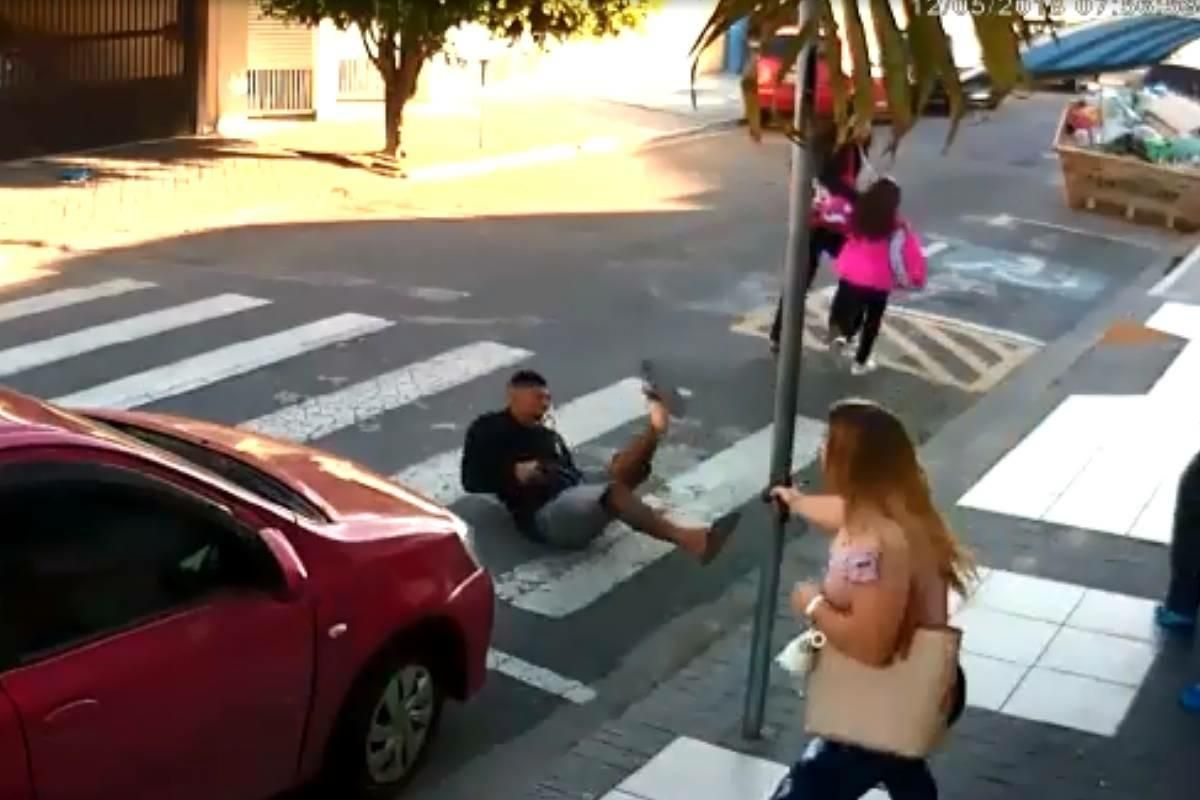 Claim:
Video captures a woman who thwarted and subdued an armed man attempting to rob attendees of a Mother's Day event.
Rating:

In mid-May 2018, many social media users encountered a video seemingly showing a female onlooker shooting, disarming, and subduing a man who had pulled out a gun and threatened a group of women and children waiting outside the entry to a building:

Although some viewers believed the video encounter to be staged, it captured a real event -- albeit one that took place in Brazil (not the U.S.) and featured a protagonist who was an off-duty veteran police officer (not a coincidentally armed civilian bystander).

According to the Brazilian daily newspaper Folha de S.Paulo, the events seen in the video unfolded as follows:

A military police officer accompanied by her seven-year-old daughter reacted to a robbery in front of a school in the Jardim dos Ipês neighborhood in Suzano on Saturday morning [May 12], killing the assailant.

Katia del Silva Sastre, 42, was off-duty when she fired three times at the thief, identified as Elivelton Neves Moreira, 21. Moreira fell to the ground and was then disarmed. He was taken to the hospital, where he died.

The incident occurred around 8:00 AM. Mothers and small children were waiting outside the gates of a private school for a Mother's Day party when they were approached by a young man armed with a .38 caliber revolver who announced his intention to rob them.

The police officer pulled out her pistol and shot the robber in the chest and leg. The suspect fell backwards onto the street, dropping his weapon in the process. The officer walked over to him, turned him face down, and subdued him until the arrival of medical and police assistance.

According to the officer's husband, Lieutentant Andre Alves, the suspect got off one shot, but it is not known whether he fired before or after Katia shot him.

"The first shot richoted off something. On his second attempt to fire, his weapon jammed. Thankfully [Katia] was faster than he was, because when a thug discovers he's being confronted by a police officer, he shoots to kill," Alves said.

Alves said that Katia has been with the police force for 20 years. "In our profession we must always be alert. I was recently shot in the arm while on duty," Alves said.

According to Alves, Katia is doing well. "She is calm, knowing that she acted correctly. Everything ended fine. It would have been a greater risk if the suspect had found out she was a cop first," he said.

A military off duty police officer, who had gone to a Mother's Day celebration at the school where her daughter is studying in Suzano, shot a suspect in front of the unit. According to the Military Police, the 21-year-old suspect was carrying a .38 caliber revolver and had already approached other mothers awaiting the opening of the gate, as well as having searched the school's security to see if they were armed.

Police also said that the suspect, who had already fired a shot that did not hit anyone, made a second attempt to fire, which failed. That was when the police officer approached the suspect. The suspect was taken to Santa Casa de Suzano but was unable to withstand his injuries and died.

The police officer is from the 4th Battalion of Special Police Actions, East Zone of the capital. The case was referred to the Suzano Central Police District

Parts of Brazil, such as São Paulo (where this incident took place), are known for high rates of crime, including armed street robberies:

Crime continues to be the principal threat to visitors to São Paulo; armed street robberies are common. Current statistics indicate that crime has not decreased since the last presidential elections in 2014. In fact, crime levels remain high and continue to rise in many areas in the state of São Paulo. Crimes and related violence can be attributed to street gangs and organized crime groups throughout the state. São Paulo continues to experience violent crimes (murder, rape, kidnappings, armed assaults, burglaries).

In São Paulo, robbery, assault, burglary, and theft are concerns for foreigners and Brazilians alike. Criminals are determined and sophisticated. All neighborhoods in the city of São Paulo are susceptible to crime. There are daily reports of armed robberies that occur regularly in the affluent residential sections of Jardims, Morumbi, Campo Belo, and Moema, where government and business leaders and a majority of the U.S. Consulate employees reside. Public transportation hubs, hotel sectors, and tourist areas have the highest crime rates. Laptop computers are the number-one target of thieves and criminals in São Paulo. Travelers should seek to use alternative and more concealable means of transporting information (thumb drives, CD/DVD ROMs). If laptops are brought to São Paulo, they should be stored discretely in luggage and/or placed in the trunk of a vehicle. Comprehensive crime statistics are published by the Secretary of Public Security.

Street crime is a problem, especially in the evenings and late at night. Caution is required when travelling at night through rural areas and satellite cities due to the significant potential for roadside robberies. Motorcycle-borne robberies are prevalent throughout São Paulo. In such instances, one to two criminals on motorcycle identify an isolated victim, pull alongside his/her, present a firearm, and steal belongings (cellphone), and evade the area.