The photo comparison made it to the top of the front page of Reddit on Feb. 4, 2022. 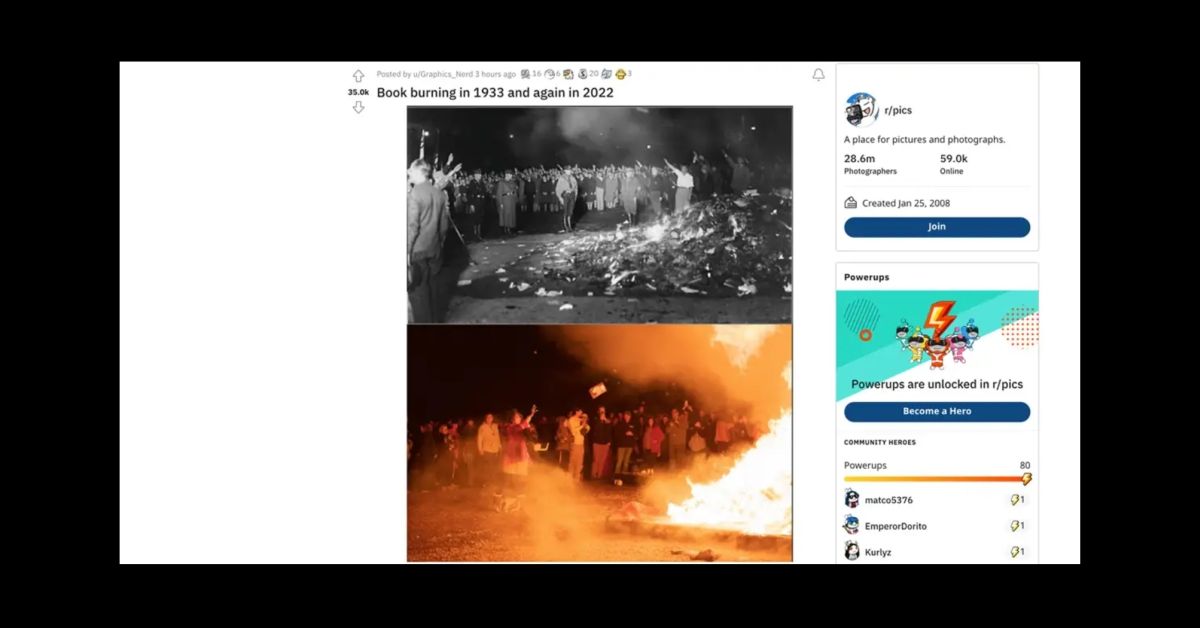 Claim:
Two pictures showing instances of book burning in 1933 and 2022 are genuine.
Rating: According to the United States Holocaust Memorial Museum's website, the first picture was taken at a book burning in Opera Square in Berlin, Germany, on May 10, 1933. Opera Square was once known as Opernplatz, but is now known as Bebelplatz. The museum described it as "perhaps the most famous book burning in history":

In a symbolic act of ominous significance, on May 10, 1933, university students burned upwards of 25,000 volumes of “un-German” books, presaging an era of state censorship and control of culture. On the evening of May 10, in most university towns, right-wing students marched in torchlight parades “against the un-German spirit.” The scripted rituals called for high Nazi officials, professors, university rectors, and university student leaders to address the participants and spectators.

At the meeting places, students threw the pillaged and “unwanted” books onto bonfires with great ceremony, band-playing, and so-called “fire oaths.” In Berlin, some 40,000 persons gathered in the Opernplatz to hear Joseph Goebbels deliver a fiery address: “No to decadence and moral corruption!” Goebbels enjoined the crowd. “Yes to decency and morality in family and state! I consign to the flames the writings of Heinrich Mann, Ernst Gläser, Erich Kästner.”

The second photograph was taken on Feb. 2, 2022, in Mt. Juliet, Tennessee, which is a suburb of Nashville.

According to Nashville Scene, "Mt. Juliet pastor and pro-Trump conspiracy theorist Greg Locke" held a book burning in the days after a Tennessee school board voted to ban "Maus," a Pulitzer Prize-winning graphic novel about the Holocaust. Reasons given for the ban included "inappropriate language" and an illustration of a nude woman, according to The Associated Press. The news was first reported by The Tennessee Holler.

The picture was captured by photographer Tyler Salinas.

Facebook provided live video hosting of the 2022 book burning. (The burning begins at the 1:04:00 moment in the clip.)

Other reports said that books from the "Twilight" series were also burned.

In sum, yes, the top post on Reddit did show book burnings that happened in 1933 in Germany, and in 2022 in Tennessee.