Images that purport to show "blue strawberries" were digitally manipulated. 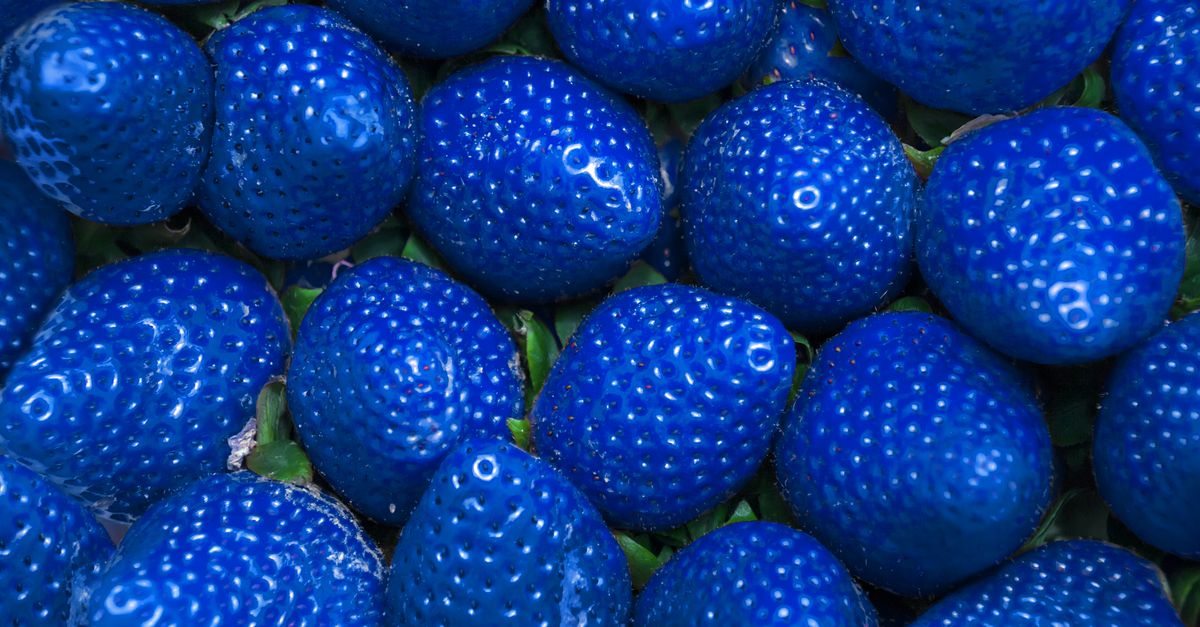 For years, photographs have circulated purporting to show the rare and little-known "blue strawberry":

These images are frequently accompanied by a sales pitch for blue strawberry seeds, and a promise that those seeds will grow into a blue fruit similar to the ones shown above. Here's one such listing from the web site "New Chic":

Blue strawberries are new varieties of strawberries that is developed by Japan
Why don't give yourself a chance to watch it grow?
You plant it like ordinary strawberry and you'll gain extraordinary one.

No matter what seeds you plant, however, they will not grow into a blue strawberry plant. All of these images started out as photographs of regular old red strawberries before they were digitally altered to appear blue:

These "blue strawberry" images have also been attached to a rumor that they were genetically modified by scientists in order to create a freeze-resistant strawberry:

They isolated the gene that produces this anti-freeze and introduced it to the strawberry. The result is a strawberry that looks blue and doesn't turn to mush or degrade after being placed in the freezer. While they're not in production, research is ongoing. Would you eat blue strawberries? There is a very small element of truth to this claim. Researchers did attempt to introduce an antifreeze gene from an Arctic flounder into strawberries in the late 1990s in order to create a more freeze-resistant fruit:

Since all organisms use the same genetic material (DNA), the power of the technique includes the ability to transfer genes between organisms that normally would never interbreed.

Thus, an antifreeze gene from Arctic flounder has been introduced into strawberries to extend their growing season in northern climates. But contrary to what many people think, this does not make the strawberries ''fishy'' any more than the use of porcine insulin turned people into pigs.

Dr. Steven Kresovich, a plant breeder at Cornell, said, ''Genes should be characterized by function, not origin. It's not a flounder gene but a cold tolerance gene that was introduced into strawberries.''

However, there is no evidence that this actually created a blue strawberry, photographs of the resulting product are not readily available online, and there are no credible reports of these genetically altered strawberries ever being produced on a large scale.

If you encounter a photograph of a blue strawberry on the internet, it most likely grew out of Photoshop, not a seed.