Sen. Blackburn Did Not Tweet of Veterans Bill: 'We Simply Cannot Afford to Give Joe Biden a Win'

This wasn't the first time the text had been shared as if it came from a Republican member of the U.S. Congress. 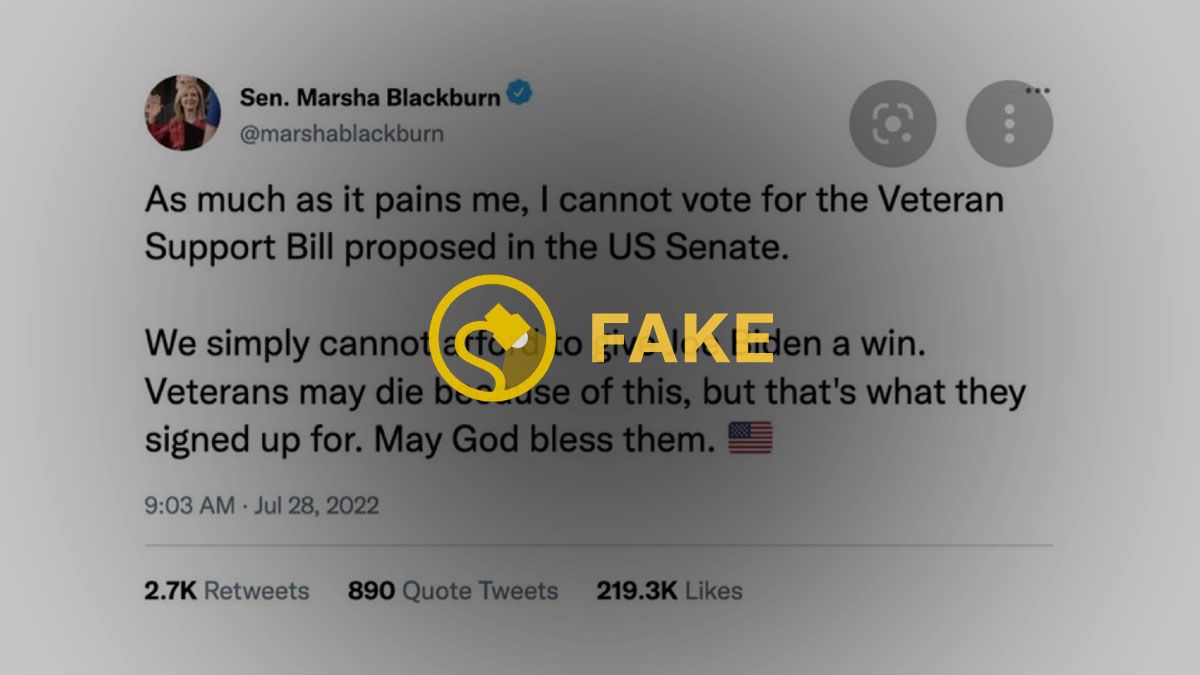 Claim:
U.S. Sen. Marsha Blackburn, R-TN, tweeted, "We simply cannot afford to give Joe Biden a win. Veterans may die because of this, but that's what they signed up for."
Rating:

In October 2022, we received reader mail that asked about a screenshot of a tweet that purportedly came from U.S. Sen. Marsha Blackburn, R-TN. However, the tweet was fake. The screenshot, which showed Blackburn's picture and Twitter handle, read, "As much as it pains me, I cannot vote for the Veteran Support Bill proposed in the U.S. Senate. We simply cannot afford to give Joe Biden a win. Veterans may die because of this, but that's what they signed up for. May God bless them."

The fake tweet had been shared as a screenshot since around July 28, the same date that was displayed in the image.

According to Reuters, some of this text was also once shared with the picture and name of U.S. Sen. Pat Toomey, R-PA. The tweet with Toomey's name originally came from a satirical Twitter account known as @FaithRubPol. It was further shared outside of its original context in numerous other tweets, including one that ended up receiving more than 20,000 likes. This tweet with Toomey's picture and name added he was "almost to tears" and the words, "That's why this is so hard on me." Also, "Parody by Back Rub" did not appear at the bottom of the tweet that showed Blackburn's image and Twitter handle.

Reuters reported that the tweet with Toomey's image and name was originally created by the satire account following news that senate Republicans had "blocked a bill to provide healthcare for veterans exposed to toxic burn pits while serving abroad." The Senate later approved the bill by a vote of 86-11.

According to Yahoo News, Toomey ultimately voted against the bill, but Blackburn voted in favor of it. The 11 senators who voted against the bill were all Republicans. In addition to Toomey, they included Mitt Romney, Thom Tillis, Rand Paul, Tommy Tuberville, Richard Shelby, Mike Crapo, James Lankford, Mike Lee, Cynthia Lummis, and James Risch.

The final tally of 86-11 equaled 97 votes. Three senators, two Democrats and one Republican, did not vote.