Is This a Picture of the Bitterroot Forest Fire? 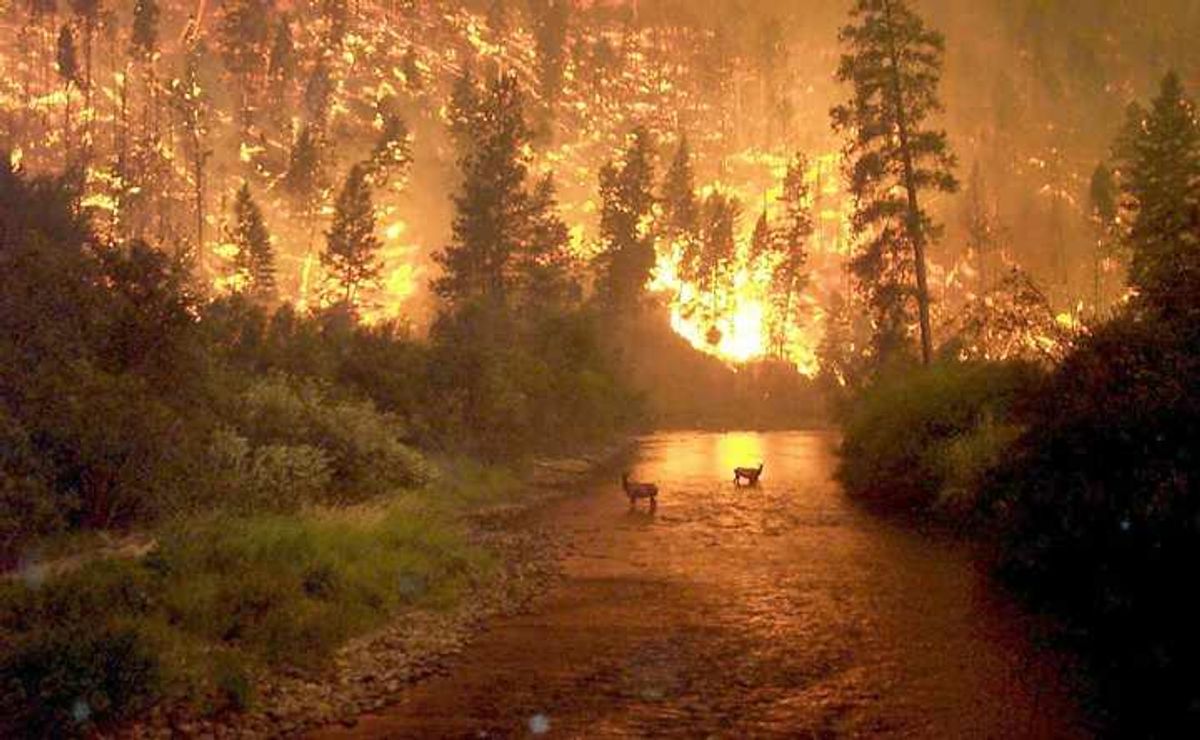 This awsome picture was taken in the Bitterroot National Forest in Montana on August 6, 2000 by a fire behavior analyst from Fairbanks, Alaska by the name of John McColgan with a Digital camera. Since he was working while he took the picture, he cannot sell or profit from it so he should at least be recognized as the photographer of this once in a lifetime shot. The year 2000 brought one of the worst fire seasons in half a century to the United States. By the month of August, more than 4 million acres (an area greater in size than the states of Connecticut and Rhode Island combined) had been burned by wildfires, and dozens of blazes raged out of control in eleven western states, with nearly half of the conflagrations occurring in Idaho and Montana.

On 6 August 2000, as several fires converged in the Bitterroot National Forest near the town of Sula in western Montana, John McColgan, a fire behavior analyst in the employ of the USDA Forest Service, snapped the spectacular photograph shown above with a digital camera and described the experience to a writer for the western Montana newspaper The Missoulian:

"That's a once-in-a-lifetime look there. I just happened to be in the right place at the right time. I've been doing this for 20 years and it ranks in the top three days of fire behavior I've seen."

The day was Aug. 6, the Sunday when several forest fires converged near Sula into a firestorm that overran 100,000 acres and destroyed 10 homes. Temperatures in the flame front were estimated at more than 800 degrees. Nevertheless, McColgan said, the wildlife appeared to be taking the crisis in stride, gathering near the East Fork of the Bitterroot River where it crosses under U.S. Highway 93.

"They know where to go, where their safe zones are," McColgan said. "A lot of wildlife did get driven down there to the river. There were some bighorn sheep there. A small deer was standing right underneath me, under the bridge."

McColgan snapped the photo with a Kodak DC280 digital camera. Since he was working as a Forest Service firefighter, the shot is public property and cannot be sold or used for commercial purposes.

After McColgan downloaded his amazing image to an office computer, a friend found it, e-mailed a copy to another friend, and by mid-September 2000 the picture was blazing its way across the Internet. Because many forwarded copies of the image lacked any attribution or explanation, e-mail recipients began to circulate rumors about its origins and authenticity — some claimed that the photo was snapped by a tourist, that it was taken during the extensive Yellowstone National Park fire of 1988, or that it was yet another digital fake.

As John McColgan said afterwards, "I couldn't have profited from [the photograph], so I guess I'm glad so many people are enjoying it." We're happy to help him at least receive proper credit for his work.

This picture has also been circulated with text identifying it as a photograph of August 2003 forest fires in British Columbia, of October 2007 California wildfires, of the June 2012 Waldo Canyon Fire in Colorado Springs, Colorado, and the November 2016 forest fires in Gatlinburg, Tennessee.