Conservatives worried about the supposed end of Mother’s Day. 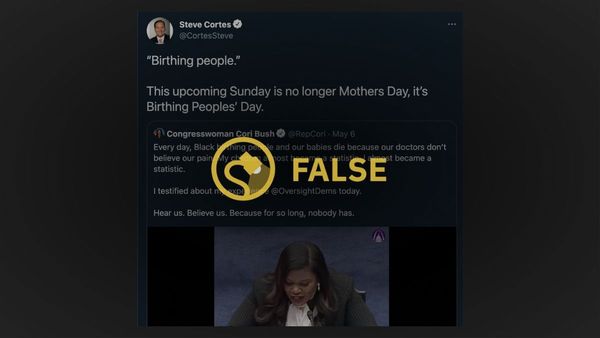 Mother’s Day could cease to exist, if conservatives are to be believed. On May 6, 2021, Democratic U.S. Rep. Cori Bush tweeted using the term “birthing people” instead of "mothers," resulting in a flurry of criticism and mockery from conservatives, including Fox News and Newsmax anchors.

Republican Sen. Ted Cruz also tweeted a picture in which "Mother's" was erased and replaced by "Birthing People's":

As a result of the criticism, Snopes readers asked us if this means that Democrats really are attempting to replace “Mother’s Day” with the term “Birthing People’s Day.”

We learned that these claims are false.

The Democratic Party has not announced, revealed, or demonstrated any plans to replace the term “Mother’s Day” with any other phrase. On May 9, 2021, Democratic House Speaker Nancy Pelosi released a statement using only the term “Mother’s Day.” When Bush tweeted using the term “birthing people,” it was in order to be more inclusive of transgender people, including transgender men and gender-nonconforming people who also give birth, she later explained.

The controversy began with a tweet in which Bush referred to the medical challenges faced by “Black birthing people.”

She defended her use of the term in another series of tweets. Bush referred to Black birthing people, Black women, Black mothers, Black trans people:

In response to her tweets, the pro-choice, pro-abortion rights advocacy group NARAL explained that the term “birthing people” was meant to be inclusive:

Bush was not the only Democrat who used this language. On May 6, Rep. Ayanna Pressley used the term “birthing people” in her reintroduction of the Maximizing Outcomes for Moms through Medicaid Improvement and Enhancement of Service Act (MOMMIES), which seeks to expand Medicaid coverage for pregnant people:

The bill extends coverage for birthing people from two months to a full year after childbirth, increasing access to primary care and reproductive health providers and ensuring that all pregnant and postpartum people have full Medicaid coverage, rather than coverage that can be limited to arbitrarily picked pregnancy-related services.

The Democrat-headed Committee on Oversight and Reforms has also used the term:

Referring to pregnant people in this way is becoming more common as a sign of inclusivity. A panel run by the Harvard Medical School’s postgraduate program used the term "pregnant and birthing people":

In sum, Democrats as a party are not seeking to rename “Mother’s Day,” nor are they seeking to replace the word "mother" with "birthing people." Many Democrats are, however, pushing for language that is inclusive of transgender and gender-nonconforming people who also give birth.

While many critics claimed that this language excludes pregnant women, Bush has referred to women, mothers, and birthing people in her tweets explaining the use of inclusive terminology. Furthermore, Bush has never advocated for changing the title of “Mother’s Day,” only called for language that includes more people. We thus rate this claim as “False.”

The Trans Journalists Association has a style guide on how to write about transgender issues in the media.