Did Bill Belichick Shake His Head at Mac Jones' Overthrow?

It's quite imaginative to believe that Belichick and a number of other NFL coaches and general managers would show disappointment at a single throw. 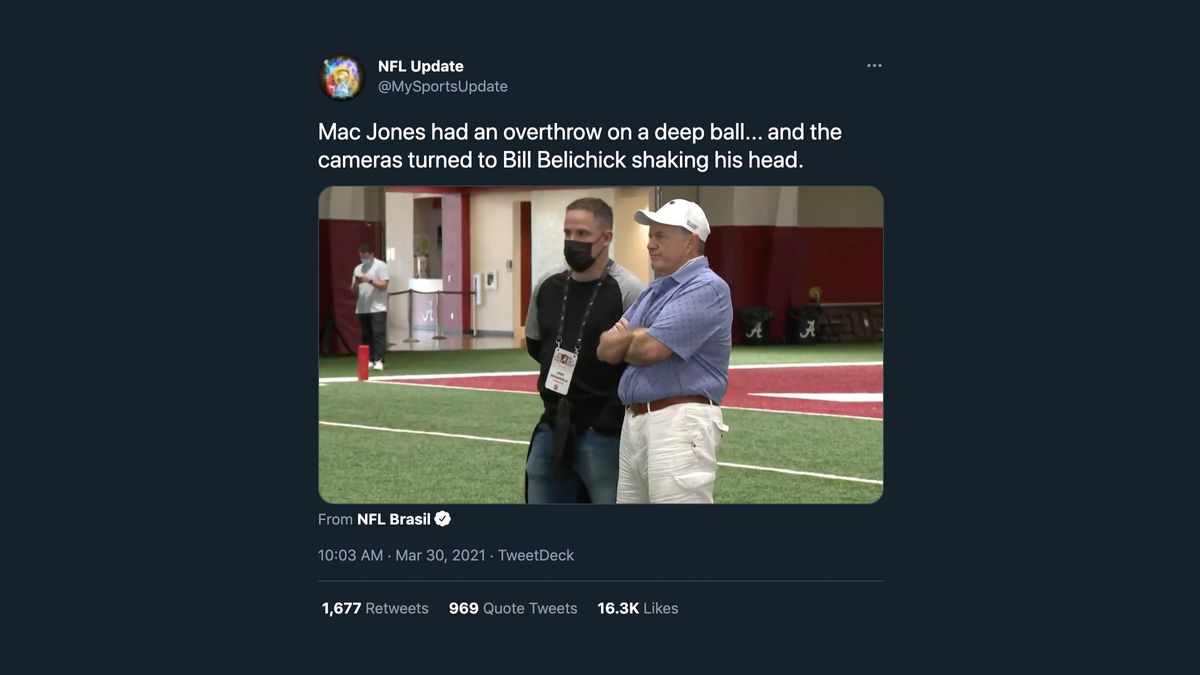 In late March 2021, a video was shared that showed Bill Belichick shaking his head moments after NFL prospect Mac Jones overthrew a football. The New England Patriots coach was on hand to attend the University of Alabama football team's pro days. In the video, he was standing next to San Francisco 49ers head coach Kyle Shanahan: We found no indication that Belichick was shaking his head or showing disapproval at a single overthrow by Jones.

In the video, it appeared that Shanahan and Belichick were having a conversation. The likely explanation of Belichick's head shake was that he was reacting to something Shanahan said.

Four NFL coaches were on hand to watch Jones and other Alabama football prospects. Sean Payton of the New Orleans Saints, Matt Nagy of the Chicago Bears, Shanahan, and Belichick were all in attendance. The Associated Press also reported that Belichick was among a group of five general managers on hand.

In January 2021, Jones led the Alabama football team to the College Football Playoff national championship. He was also a Heisman Trophy finalist, placing third in the vote count. The team's head coach is Nick Saban.

The same Twitter account that hosted the video of Belichick shaking his head also tweeted this video. It showed Jones throwing a deep ball with precision:

The Associated Press published a brief comment from Jones. He appeared to feel confident in his showing in front of Belichick and the other NFL coaches and general managers:

"At Alabama, they told me to sit in the picket and rip it, so that's what I did," Jones said. "That's what you're supposed to do when you're at Alabama."

"But when the NFL comes, I'll do whatever they tell me to do. I showed today that I can do everything that they want me to do."

Without further evidence that Belichick was showing disapproval at a single throw of the football by a Heisman Trophy finalist who led his team to a national title, we have rated this claim as "Unproven."