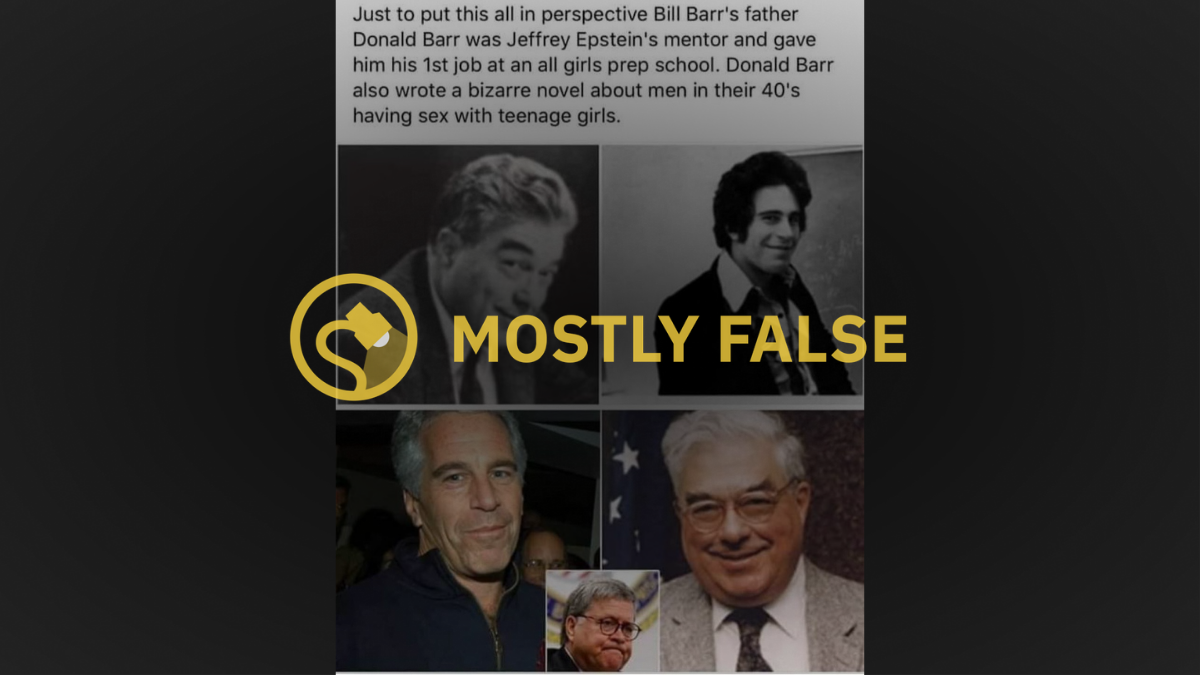 Donald Barr was headmaster of Dalton School in New York City until the summer of 1974. In September 1974, Jeffrey Epstein began working as a maths and physics professor at the school. In 1973, Barr published a science fiction novel that contained several prominent references to, and descriptions of, rape and sexual slavery.

However, Dalton is not an "all girls" school and was not so when Epstein worked there; the claim that Barr was Epstein's "mentor" appears to be no more than idle speculation, unsupported by any evidence; Barr's novel does not celebrate slavery or sexual violence against underage girls, and in one instance the protagonist brutally murders another character to avenge the rape of a teenage girl.

It's not clear whether Donald Barr played any part in hiring Epstein to work at Dalton School.

The meme had been shared many times on social media since the summer of 2019. The following screenshot shows the results of a Facebook search for a phrase from the meme and demonstrates just how widely it has been promulgated: A typical version of it contained the following text:

"Just to put this all in perspective, Bill Barr's father Donald Barr was Jeffrey Epstein's mentor and gave him his 1st job at an all girls prep school. Donald Barr also wrote a bizarre novel about men in their 40s having sex with teenage girls."

The meme also typically contained what appeared to be photographs of Donald Barr, Bill Barr, and Jeffrey Epstein: The posts emerged in the summer of 2020, but regained prominence in October, when a U.S. District Court judge ruled in favor of releasing the transcripts of depositions involving Ghislaine Maxwell, Epstein's former girlfriend, in 2016. In July 2020, Maxwell was arrested and charged with facilitating Epstein's sexual abuse of three underage girls. Epstein was awaiting sex trafficking charges when he died in prison in New York in August 2019. The New York City medical examiner ruled his death was a suicide.

On Oct. 20, 2020, the progressive SuperPAC (political action committee) Meidas Touch promoted the Epstein-Barr meme in a widely shared tweet that read, "The more you know." Donald Barr was an educator and writer from New York City. He was a member of the engineering department at Columbia University when, in 1964, he became headmaster of the elite, private Dalton School on the Upper East Side of Manhattan, a position he held for 10 years. In February 1974, he sent a letter to parents and faculty, informing them of his impending resignation at the end of that academic year.

Regarded as a disciplinarian in a school with a historically progressive ethos, Barr said he was quitting due to what he presented as excessive and persistent interference by the board of trustees in his running of the school. He became headmaster of another private preparatory school, the Hackley School in Westchester County, New York, in the summer of 1975. Barr died in 2004.

Epstein began working as a math and physics teacher at Dalton in September 1974, according to a New York Times review of the school's yearbooks. Dalton is not an "all girls" school and was not so during Epstein's employment there, contrary to the inaccurate description contained in the meme. It was originally an all-girls school, but transitioned to co-educational status during the early years of Barr's tenure. As the Times notes, Epstein has not been publicly accused of sexually abusing any students while he taught at Dalton, but in 2019 some alumni recalled seeing him flirt with female students.

It's not clear whether Barr had any role in hiring Epstein. In February 1974, Barr announced his intention to resign at the end of the school year, and in September 1974, Epstein began working at Dalton. It's not clear when Epstein was hired or by whom. Snopes asked the Dalton School for clarification on those points, but we did not receive a response in time for publication. So the meme's claim that Barr "gave [Epstein] his first job" is unproven.

Epstein was fired at the end of the 1975-76 school year. Peter Branch, interim headmaster after Barr's departure, told The Miami Herald that Epstein "had not adequately grown as a new teacher to the standard of the school."

The description of Barr as Epstein's "mentor" appears to be no more than idle speculation extrapolated from the (already questionable) claim that the former hired the latter to teach at Dalton School. Snopes found no publicly available evidence to support any claim that Barr and Epstein had any personal relationship. As we've explained, even the claim of a professional connection is dubious, since Epstein never actually worked under Barr, and Barr may not have hired him.

Barr did write a book called "Space Relations: A Slightly Gothic Interplanetary Tale" — a science fiction novel that was published in 1973. Like most works of science fiction, it certainly contains elements that could reasonably be described as "bizarre," as the meme puts it. "Men in their 40s having sex with teenage girls" is not the primary content of the novel, but intergalactic slavery, including sex slavery, plays a prominent role in the book's plot, which is a kind of parody of geopolitics and international (or in this case, interplanetary) relations.

Sexual violence is not celebrated in the book, though it is at times described in a neutral or matter-of-fact way. In one episode, a crew member on a space ship rapes a captive girl who, according to the protagonist, "could not have been more than fifteen." The rape is not described in graphic detail, and the third-person narrator relates it with a sense of horror, saying the protagonist "shut his eyes, but could not shut his ears." Later, the protagonist murders the same crew member, subjecting him to a prolonged death explicitly in order to avenge the girl he had raped.

The claims made in the widely shared meme are not presented as mere trivia. They are intended to create the impression of a sinister connection between Epstein and Donald Barr, and therefore a conflict of interest on the part of his son, Attorney General Bill Barr, in the context of federal investigations into the circumstances surrounding Epstein's suicide and the ongoing prosecution of Maxwell.

The reference to Donald Barr's novel also appears intended to suggest, by way of innuendo, that Barr had an interest in sexual violence or underage girls. We found no evidence whatsoever to support that implication and no evidence that Barr had ever been accused of any sexual impropriety during his tenure at Dalton or in any other context.