Is Biden Preparing To Give Sovereignty of US to WHO?

The United States is working with the World Health Organization's 193 other members to prepare for another global pandemic. 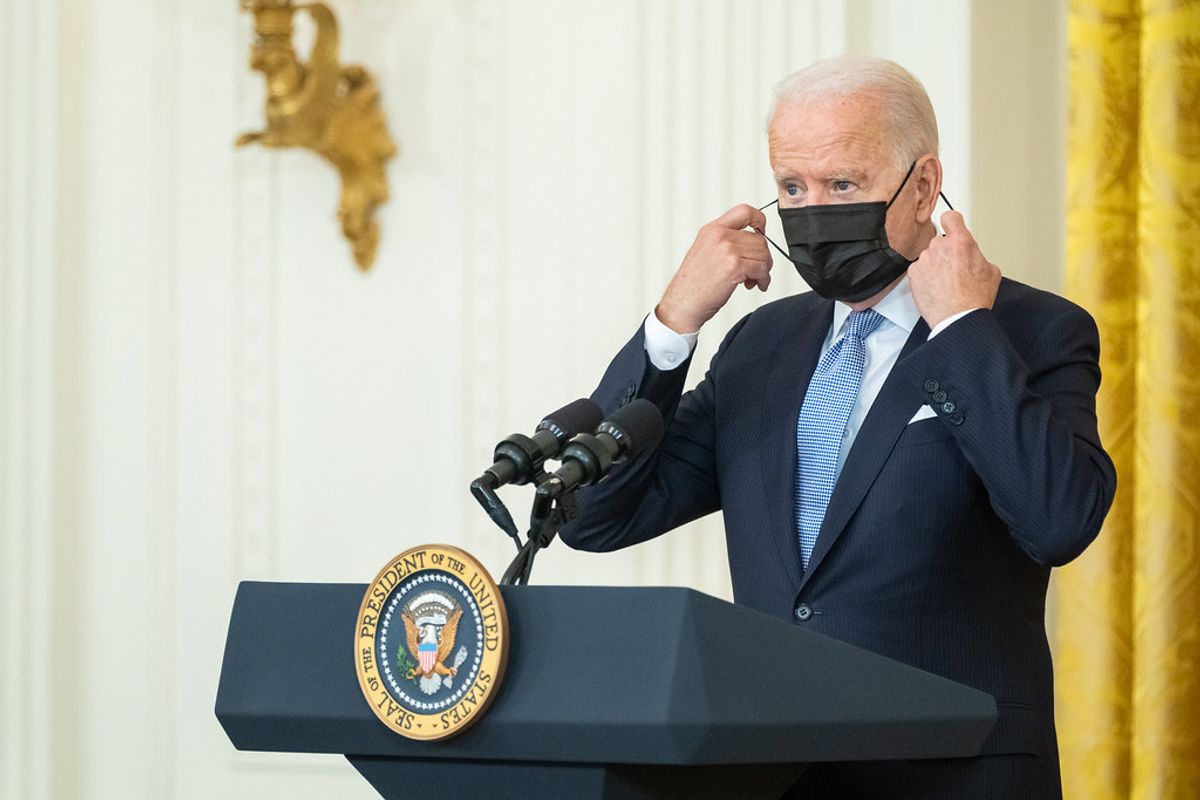 Claim:
In spring 2022, U.S. President Joe Biden's administration was preparing to give the country's sovereignty over health issues to the World Health Organization (WHO), granting the organization the power to implement its own lockdowns.
Rating:

This claim stemmed from talks in 2022 among WHO's member states, which include the U.S., around amending existing International Health Regulations. As of this writing, while there was no official version of what the WHO was calling a "pandemic preparedness accord," the Biden administration had released its own ideas, and they did not include a plan to give the nation's sovereignty to the WHO, or offer ways for the WHO to gain new authority to implement lockdowns.

In May 2022, rumors surfaced claiming that U.S. President Joe Biden was planning to give the country's sovereignty over health issues to the World Health Organization (WHO), along with the leaders of 193 other countries. While these rumors stemmed from genuine proposals that United Nation members were discussing at the time to strengthen the world's preparedness against global pandemics, they grossly exaggerated, distorted, and misinterpreted the actual impacts of the proposed ideas.

For example, one popular claim held that proposed amendments to existing guidelines would grant WHO the authority to lock down countries. Former Republican Rep. Michele Bachmann popularized that assertion when she discussed the issue in an interview with Steve Bannon, a political strategist who was charged with defrauding people before he was pardoned by former President Donald Trump.

During this interview, Bachmann said:

'There are 193 nations belonging to the UN. The Biden administration is bringing amendments that were proposed that all nations of the Earth cede their sovereignty over their national health care decisions to the WHO.

'This means that the WHO would have decision-making authority to intervene in the United States government policy and any nation of the world without our permission; for instance, the lockdown where you see 26 million people today locked down in Shangai, China. They can’t leave their apartments or homes. The WHO would have the authority to be able to enforce that here in the United States, on whatever pretext they want. They don’t have to show data. They could do this.'

While it was true that almost 200 countries (including the U.S.) were members of WHO, and that that group was discussing potential changes to how they work together as of spring 2022 (we elaborate on that fact below), Bachmann's claim that those talks could result in the WHO having new authority to implement lockdowns in the United States or any other country was untrue.

What Are WHO Members Proposing To Change?

In 1969, the WHO adopted a set of guidelines known as the International Health Regulations (IHR) in order to empower the international health agency to surveil global diseases. International officials have revised the regulations a few times over the years, including in 2005 after the 2002-2003 SARS outbreak. The Centers for Disease Control and Prevention (CDC) wrote:

In December 2021, following the deaths of nearly 6 million people around the globe from the COVID-19 pandemic, world leaders started working on amendments to the IHR in order to strengthen the world's response to the next global pandemic.

Reuters reported that some proposed amendments involved the sharing of data related to emerging viruses, a ban on wildlife markets, and a plan for equitable vaccine distribution. The European Union proposed that the ideas take the form of a new treaty, though the U.S. and other countries expressed reluctancy toward such a binding agreement, Reuters reported. In other words, as of this writing, WHO members were discussing the proposed amendments to existing regulations, and the exact contents of a future "pandemic preparedness accord" were unknown.

A new pact is among more than 200 recommendations for shoring up the world's defences against new pathogens made by various reviewers following the COVID-19 pandemic that has killed more than 6.2 million people in two years.

Negotiations on new rules for dealing with pandemics will begin at the World Health Organization on Thursday, with a target date of May 2024 for a treaty to be adopted by the U.N. health agency's 194 member countries [...]

Suggested proposals for the pact include the sharing of data and genome sequences of emerging viruses and rules on equitable vaccine distribution. The European Union is pushing for a ban on wildlife markets and incentives for reporting of new viruses or variants, an EU official told Reuters.

Would Biden's Proposals Give WHO New Authority Over Lockdowns?

While there was no official version of what the WHO was calling a "pandemic preparedness accord" among members, the Biden administration had released its ideas for how it would like to amend existing international guidelines. Those amendments (available via a PDF on the WHO's website for public viewing) did not outline ways for the WHO to gain new authority to implement U.S. lockdowns. In fact, the amendments made no mention of "lockdowns" at all.

That said, it was still possible that the WHO could recommend a lockdown in a region due to a contagious disease. But that recommendation would still require government action in order to take place, and that system was already in place, with or without the proposed amendments by Biden's team.

Additionally, nowhere in this document did the presidential administration propose to give WHO the authority to override the decisions of any member state, nor to give up its national sovereignty.

In general, the Biden administration's proposed amendments dealt with monitoring emerging diseases, implementing a notification system across countries, and developing strategies for WHO officials to assist member states in times of emergency. For example, Article 12, a section of the document that dealt with the "determination of a public health emergency," stated that when a global health threat is determined, the Director-General of WHO "shall notify all States Parties and seek to consult with the State Party in whose territory the event arises."

WHO Director-General Tedros Ghebreyesus addressed some of the above-outlined rumors during his opening remarks at a media briefing on May 17. Ghebreyesus dismissed the notion that any country was giving up its sovereignty by working on the potential agreement between WHO members, and stated that they, not WHO officials, were driving the work.

The accord process is led by Member States with their own Intergovernmental Negotiating Body (called INB), representing all regions of the world. The INB has now started a two-year process that includes global public hearings with all stakeholders. This represents the world’s opportunity to plan together, detect pathogens quicker, share data broadly and collectively respond more effectively to the next diseases X or known pathogens.

Unfortunately, there has been a small minority of groups making misleading statements and purposefully distorting facts.

I want to be crystal clear. WHO’s agenda is public, open and transparent. WHO stands strongly for individual rights. We passionately support everyone’s right to health and we will do everything we can to ensure that that right is realized.

The first ever World Health Assembly, which took place soon after the WHO Constitution entered into force in 1948, was a watershed event in global public health. And like the proposed pandemic preparedness accord, this did not mean WHO usurped nations’ sovereignty; in fact it strengthened countries’ ability to fight diseases together.

Every year, these sovereign governments come together at the World Health Assembly to set the health agenda for the world. Individually we can’t beat pandemics; our best chance is together

The accord process is at the very beginning of a multiyear Member State-led negotiation, which will only be finalized in 2024 after multiple public hearings around the world. And all voices will be heard. The essence of the proposed pandemic preparedness accord is to improve cooperation, coordination, and the sharing of data, information, biological materials and lifesaving tools.

Considering that statement, as well as the fact that the claim was unsupported by the actual language in Biden's proposed amendments, we rate this claim "False."

Fact Check: The World Health Organization Will NOT Have Authority To Lock Down All of America | Lead Stories. https://leadstories.com/hoax-alert/2022/05/fact-check-who-will-not-have-authority-to-lock-down-all-of-america.html. Accessed 17 May 2022.

“#StopTheTreaty Trends in Canada.” The Counter Signal, 17 May 2022, https://thecountersignal.com/stopthetreaty-trends-in-canada/.