Did Biden Kneel in Protest During the National Anthem?

Critics claimed a viral photograph showed the former vice president "taking a knee" at an October campaign stop in Miami. 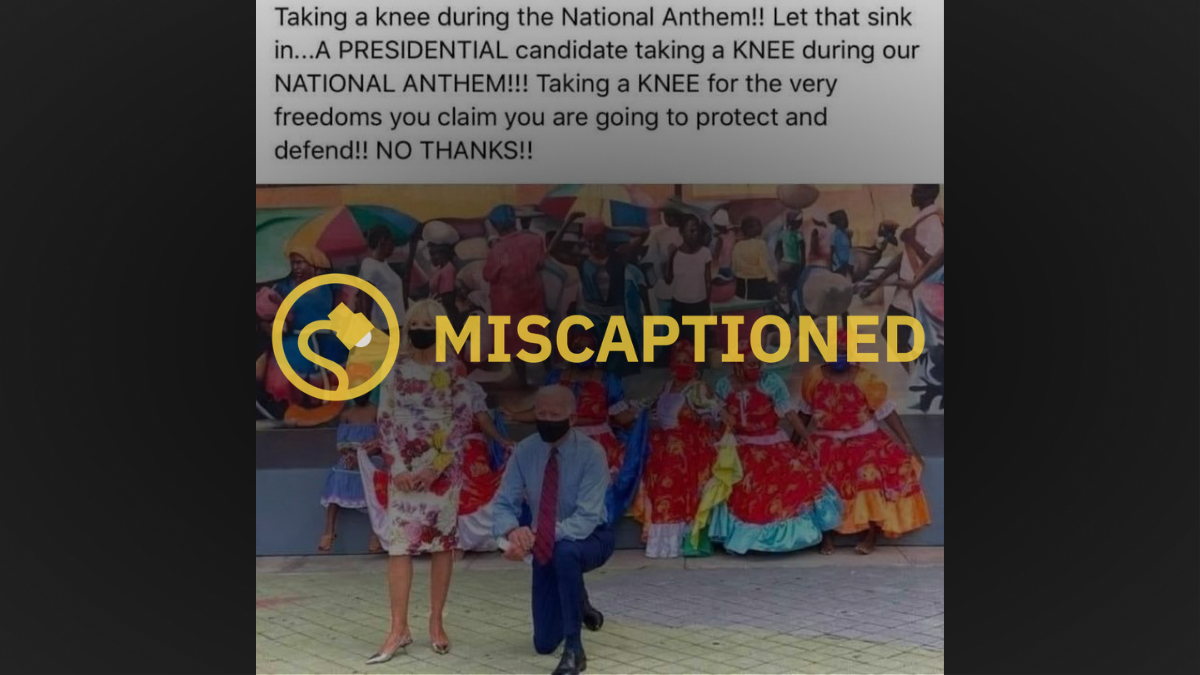 Claim:
An image shared widely in October 2020 showed Joe Biden "taking a knee" in protest, during the playing of the national anthem.
Rating:

Biden kneeled to pose for a photograph at the Little Haiti Community Center in Miami, on Oct. 5, 2020.

The national anthem was not playing at that time, and Biden was not engaging in any protest.

In the final weeks of the 2020 presidential election, many readers asked Snopes to examine a Facebook post that was shared widely during the second week of October, and claimed to contain an image of Democratic presidential candidate Joe Biden "taking a knee" during the playing of the national anthem, a controversial form of protest against racial injustice and police brutality.

The post contained a photograph of Biden crouched on one knee, with his wife Jill Biden standing next to him. The text typically read:

"Taking a knee during the National Anthem!! Let that sink in... A PRESIDENTIAL candidate taking a KNEE during our NATIONAL ANTHEM!!! Taking a KNEE for the very freedoms you claim you are going to protect and defend!! NO THANKS!!" The photograph was authentic and unedited, but the description attached to it was false. Biden briefly kneeled on one knee to pose for a photograph, but the national anthem was not playing at that time, and he was not engaging in any protest.

The photograph was taken by Miami Herald photographer Jacqueline Charles during the Bidens' visit to the Little Haiti Community Center in Miami, on Oct. 5, 2020. After Biden's speech, he posed for pictures with members of the Nancy St. Leger Danse Ensemble, who can be seen in the background of the photograph in question.

The original photograph can be found in the Getty Images library, here, along with the following caption:

"Democratic presidential nominee and former Vice president Joe Biden at the Little Haiti Cultural Center in Miami on October 5. After addressing the invited group, which was kept small due to COVID-19, he and his wife, Jill Biden, posed for photos with members of the Nancy St. Leger Danse Ensemble, which performed during the visit."

The photograph itself can be viewed below:

Charles explained the context in which she took the photograph, telling the Herald:

“I took a photo of the vice president at his event in Miami’s Little Haiti community,” Charles said. “He had just finished addressing the group when at the end of the event someone asked for a photo. There was no national anthem playing in the background.”

She continued: “It’s a socially distanced photo, and most people kneel so that everyone can be seen in the photo. Before COVID, everyone would have just stood in a tight space. But that couldn’t be done, so he kneeled as the dancers stood in the back,” Charles added, noting that she did not ask the former vice president why he chose to kneel.

"Taking a knee" during the playing of the national anthem has been a controversial form of protest against racial injustice and police brutality, since former NFL quarterback Colin Kaepernick began doing it in September 2016. (Kaepernick originally sat in protest during the anthem, but switched to kneeling after a meeting with former NFL player and U.S. Army Special Forces soldier and Green Beret Nate Boyer.

Critics of the gesture say it denigrates the service rendered by members of the U.S. Armed Forces, and U.S. President Donald Trump has repeatedly targeted players who kneel in protest during the national anthem.