Did a Sign in Alaska IHOP Blame Biden for Curtailed Hours?

"Nobody wants to work anymore," complained a typo-ridden flyer supposedly posted in an IHOP restaurant in 2021. 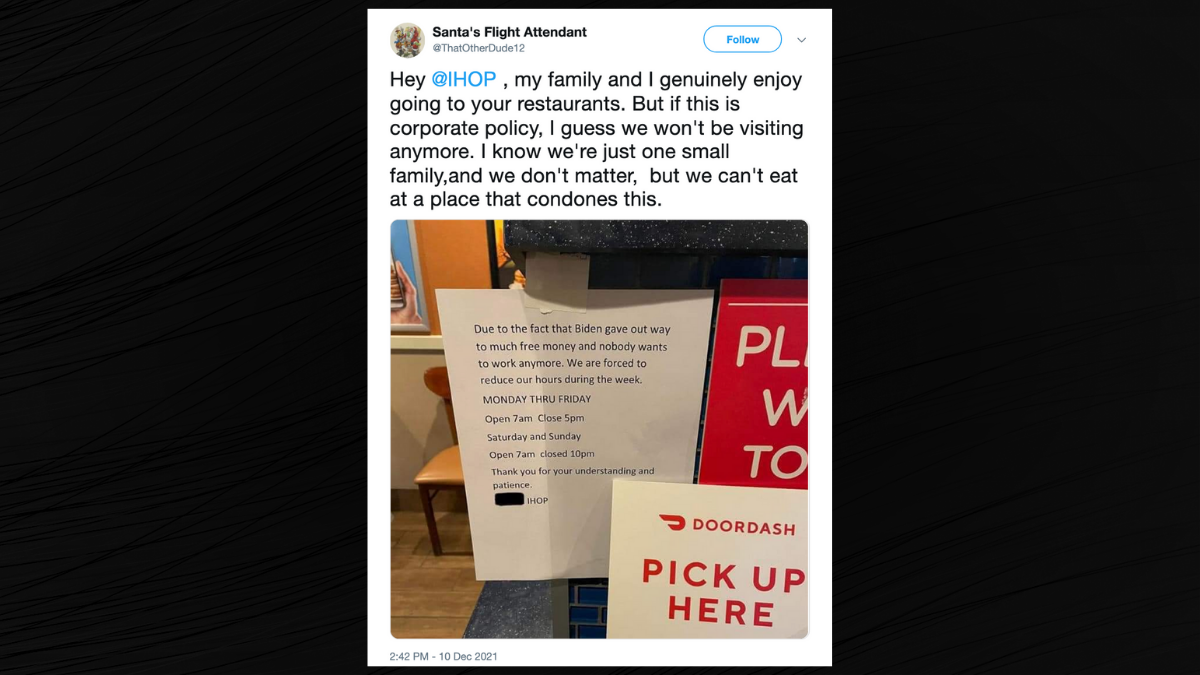 In a statement to Snopes, the company said the posting of the sign was the unauthorized act of one individual and does not represent the viewpoints of IHOP or the local franchisee.

In December 2021, multiple news outlets and social media users reported that a sign at an International House of Pancakes (IHOP) restaurant in Alaska blamed U.S. President Joe Biden for a shortage of workers, and the need to cut ordinary opening hours.

A sign at an IHOP in Alaska said the franchised restaurant was reducing hours because of staff shortages and blamed President Biden's COVID-19 relief programs.

"Due to the fact that Biden gave out way too much free money and nobody wants to work anymore, we are forced to reduce our hours during this week," the typed sign posted to the counter at an IHOP in Wasilla, Alaska, reads. It states the restaurant will now be open Monday through Friday from 7 a.m. to 5 p.m. and on weekends from 7 a.m. to 10 p.m.

"Thank you for your understanding and your patience," it concludes.

That report, and several others, cited a widely-shared Dec. 10 tweet posted by @ThatOtherDude12, whose account has since been deleted. The tweet contained a photograph of what appeared to be a typed-up sign, ostensibly on behalf of the restaurant's management, which read:

Due to the fact that Biden gave out way to [sic] much free money and nobody wants to work anymore. We are forced to reduce our hours during the week.

Thank you for your understanding and patience.
[Redacted] IHOP The anti-Biden IHOP sign was real, and was posted by an employee at the Wasilla, Alaska, location. As such, the basic claim at the heart of multiple news reports and social media posts, in December 2021, was accurate, and as a result we're issuing a rating of "True." Some outlets did initially misreport aspects of the incident — including where it took place and when — but neither detail fundamentally altered the core claim, which was confirmed by the company itself.

In an emailed statement, an IHOP spokesperson told Snopes:

This sign was posted last month [November 2021] at one of our franchised locations in Wasilla, AK and was immediately removed after we were made aware. This was an unauthorized act of one individual and does not represent the viewpoints of IHOP or the local Franchisee.

We asked the company whether the person who posted the anti-Biden flyer was a manager or non-management worker, but we did not receive any clarification in time for publication.

Several outlets, including the Daily Mail, the New York Post, and BoingBoing, initially reported that the incident took place in Arkansas, before later correcting that error. The Daily Dot and the Daily Wire had not corrected the same error, as of Dec. 15. The confusion may have arisen from the IHOP statement distributed to the media, which referred to "Wasilla, AK," initials that some reporters may have mistaken for those of Arkansas (AR or Ark.).

Furthermore, although the picture of the sign went viral in mid-December, it was actually taken in November, and posted online at that time. It's not clear who originally published it online, or on what platform, but we found a Reddit post from as early as Nov. 1: While elements of the story were misreported, the core claim was not substantially misrepresented: as confirmed by the company itself, an employee at the Wasilla restaurant did indeed post a flyer that blamed Biden for that location's staffing problems and curtailed hours.