During the dignified transfer of U.S. soldiers killed in Afghanistan, U.S. President Joe Biden appeared to glance at his watch. 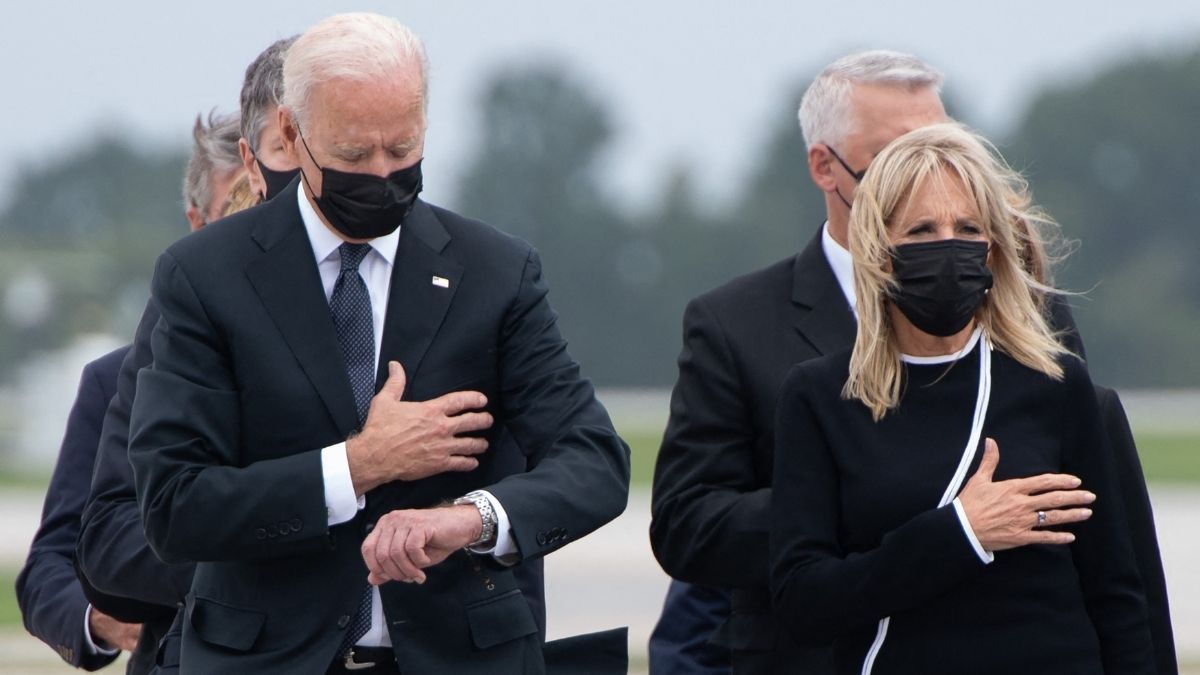 On Aug. 29, 2021, videos and photographs started circulating online that supposedly showed U.S. President Joe Biden checking his watch during the dignified transfer of 13 American soldiers who were killed by a suicide bomber in Afghanistan. These images were widely circulated by Biden's critics, who called his behavior callous.

Biden, first lady Jill Biden, and other members of the military and his administration, stood on the tarmac of Dover Air Force Base as 11 flag-draped coffins (two transfers were conducted in private) were carried from a military plane into vehicles ready to drive them to a facility at Air Force Mortuary Affairs Operations. As each coffin was brought out of the plane, Biden and the rest of the party would place their hands over their hearts or raise them in salute.

After the remains of the final soldier were loaded into the vehicle, and after the vehicles pulled away, Biden lowered his arms to his sides and appeared, for a brief moment, to glance at his watch.

This moment can be seen in the following video from C-SPAN. At the 39-minute mark, the vans carrying the remains of the 11 fallen soldiers depart the area. Biden stands in silence with his hand on his heart for about 30 seconds. When he finally lowers his hand, he appears to turn his wrist and glance down at his watch before striking a more solemn pose.

After this clip went viral, two family members of these fallen soldiers appeared on the Fox News program "Hannity" and alleged that Biden checked his watch after every casket was transferred. Darin Hoover, the father of Marine Staff Sgt. Taylor Hoover, and Mark Schmitz, the father of Marine Lance Cpl. Jared Schmitz, told Hannity (via the NY Post)

“I actually leaned into my son’s mother’s ear and I said, ‘I swear to God, if he checks his watch one more time …’,” Schmitz recalled, “and that was only probably four times in. I couldn’t look at him anymore after that, just considering, especially, the time and why we were there. I found it to be the most disrespectful thing I’ve ever seen.”

Biden was not on video during the entire broadcast of this solemn ceremony, so we can't say for certain how many times he checked his watch. We watched this full video and looked through photographs from Getty Images, Reuters, and The Associated Press to see if Biden checked his watch at any other time during the ceremony. As noted by USA Today, Associated Press photographer Carolyn Kaster captured two images of the president as he appeared to glance at his watch. As these photographs were taken 10 minutes apart, it appears that Biden checked his watch at least twice during the ceremony. A third photograph from Getty photographer Saul Loeb also captured Biden glancing at his watch, but that photograph may show the same moment captured by Kaster or the moment shown in the video.

HEINRICH: One question on the dignified transfer, and then I want to get to Afghanistan. Some of the Gold Star families have criticized the President — President’s conduct at the dignified transfer. There was a father of one Marine who said that the President appeared to be checking his watch every time a flag-draped transfer case came out of the plane. And a sister of another Marine said that it felt like a fake and scripted apology. Was the President looking at his watch? And does he have a message to those people who felt that they were offended?

MS. PSAKI: Well, I would say his message to all of the family members who were there, those who were not even in attendance is that he is grateful to their sons and daughters, the sacrifice they made to the country; that he knows firsthand what it’s like to lose a child and the fact that no one can tell you anything or say anything — or there’s no words that are going to fill that hole that is left by that.

He’s not going to speak to and I’m not going to speak to the private conversations. Of course, they have the right to convey whatever they would like. But I will tell you, from spending a lot of time with him over the past couple of days, that he was deeply impacted by these family members who he met just two days ago; that he talks about them frequently in meetings and the incredible service and sacrifice of their sons and daughters. I — that is not going to change their suffering, but I wanted to convey that still.

CORRECTION [3 September 2021]: This article was changed from Mixture to True after a photograph was uncovered showing Biden checking his watch for a second time during this ceremony. The article originally addressed the claim that Biden checked his watch 13 times but was changed to "multiple times" to better address the most common rumors about this incident.