Joe Biden promised not to build "another foot of wall" during his 2020 campaign. 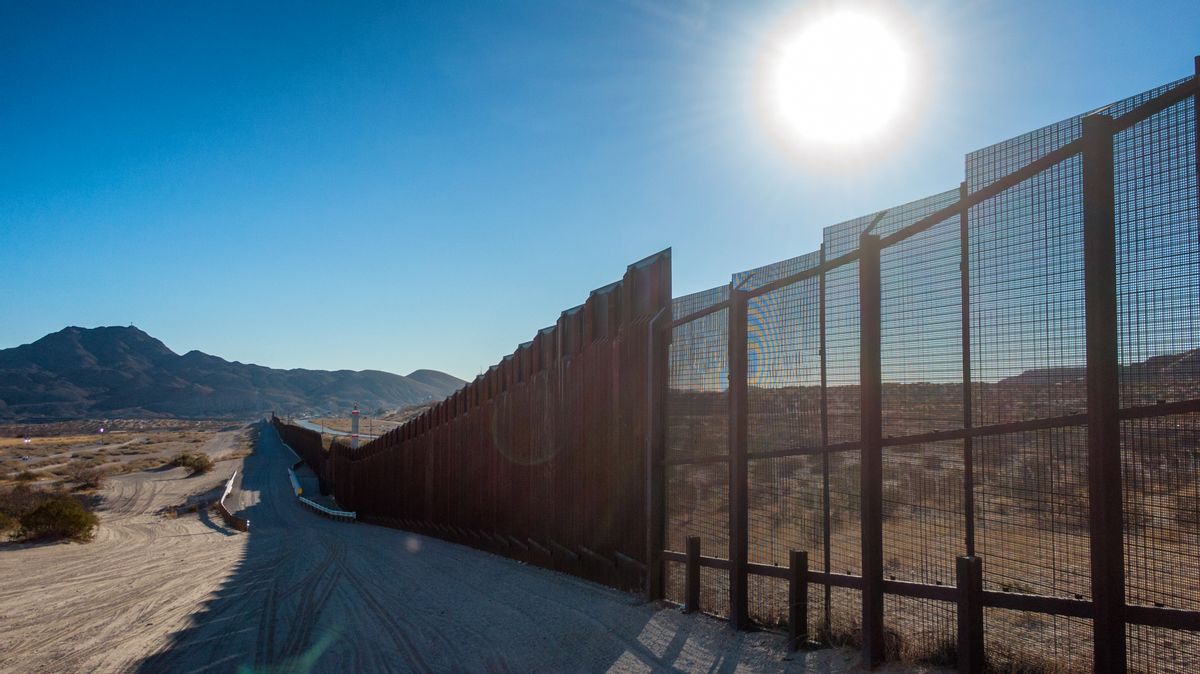 The International Border Between Mexico and The USA. (Image Via Getty Images)

Claim:
After U.S. President Joe Biden issued an executive order halting construction on the Mexico-U.S. border wall on Jan. 20, 2021, his administration considered reversing that policy stance and extending the concrete-and-steel wall beyond its current limits.
Rating:

President Joe Biden, who promised during his campaign not to build "another foot of wall," signed an executive order pausing funding for border wall construction. Then, in early April 2021, White House Press Secretary Jen Psaki said previously approved congressional actions set aside funding for "some components of the wall" and "limited construction" that was either in process or set to happen in the future. However ...

The Biden administration had not reversed its opposition to the border wall, which had been a hallmark of former U.S. President Donald Trump's presidency.

It is unclear which congressional actions, specifically, allocated the above-mentioned funding, and whether the "limited construction" includes extending the barrier or simply making updates to the existing structure.

In early April 2021, Snopes readers asked us to investigate rumors that U.S. President Joe Biden's administration was coming around to the idea of a continuous wall between Mexico and the U.S. and considering restarting construction on it.

Among entities that highlighted the claim was Charlie Kirk's conservative political group, Turning Point USA. Via statements like the below-displayed Facebook post, the group and other Biden critics attempted to frame the rumor as evidence of the president's alleged hypocrisy; he had promised not to build "another foot of wall" during his 2020 presidential campaign. While it was false to claim the Biden administration had warmed up to the border wall as a solution to immigration problems, it was true that funding was allowed for "limited construction" (via unspecified congressional actions) to occur during the Biden presidency, according to The White House. Below, we lay out evidence for those conclusions.

First, the claim surfaced after Biden issued an executive order on Jan. 20 pausing a stream of federal funding toward border-wall construction initiated by former President Donald Trump. Trump had framed the multi-billion-dollar spending as a necessary step to curb illegal border crossings by people fleeing poor living conditions in Central American nations. By contrast, Biden dubbed the concept "a waste of money that diverts attention from genuine threats to our homeland security."

As of Jan. 15, 2021, the government had spent $6.1 billion of the $10.8 billion in work it signed contracts to have done, according to a Senate Democratic aide who spoke on the condition of anonymity to The Associated Press (AP). Around that time, U.S. Customs and Border Protection (CBP), the agency that oversees border security and operations, said the wall, in total, spanned 771 miles, including vehicle barriers and pedestrian fencing — about one-third of the length of the entire border.

Biden's executive order halted "immediately the obligation of funds related to construction of the southern border wall, to the extent permitted by law," and required his administration to determine the cost of cancelling in-process construction contracts and whether the money could be spent elsewhere, according to the order and news reports.

Cut to April 5, when the Washington Times, a conservative-leaning news outlet, published an article titled, "EXCLUSIVE: Biden's DHS may restart border wall construction to plug 'gaps'." The reporting was based on notes supposedly documenting a meeting the previous week between Department of Homeland Security (DHS) Secretary Alejandro Mayorkas and Immigration and Customs Enforcement (ICE) employees.

It was unclear, based on The Washington Times report, when or under what circumstances the purported meeting took place, as well as how the media outlet obtained the notes. No reputable news outlet -- such as The Associated Press or Reuters -- reported on the alleged conversation about filling in "gaps" at the border wall (aside from Business Insider, which primarily recirculated The Washington Times' reporting).

According to the purported notes, Mayorkas said CBP leaders have submitted proposals for "different projects" along the border wall because officials supposedly have the opportunity to finish or update certain areas. Here's his full quote in The Washington Times:

'The president has communicated quite clearly his decision that the emergency that triggered the devotion of DOD funds to the construction of the border wall is ended. But that leaves room to make decisions as the administration, as part of the administration, in particular areas of the wall that need renovation, particular projects that need to be finished,' he said.

He said those parts include 'gaps,' 'gates,' and areas 'where the wall has been completed but the technology has not been implemented.'

Put another way, despite Biden's order to stop pumping emergency dollars into the project, Mayorkas purportedly said an unidentified sum of money could still be used to repair or update certain areas. Such construction could include gates or technology improvements, according to his alleged comments.

It is unclear how, or under what congressional action or work contract, border officials could legally access said funding for the potential construction. We reached out to agencies including the White House and DHS for clarity on that legality, and we did not receive a response. We will update this report when, or if, we do.

During daily press briefings on April 6 and 7, White House Press Secretary Jen Psaki confirmed previously approved congressional actions set aside funding for "some components of the wall" and "limited construction." Her comments did not explain the nature of that construction, nor when it would take place.

Here's the verbatim transcription of her statement on April 6, according to an official White House transcript and C-SPAN video recording of the media event:

Wall construction remains paused, to the extent permitted by law. So some has already been funded through a congressional authorization and funding allocation. But as agencies develop for a plan — it’s paused while agencies are developing a plan for the President on the management of the federal funds.

When the administration took office, as you referenced, funds had been diverted from congressionally appropriated military construction projects and other appropriated purposes toward building the wall. And wall construction was being challenged in multiple lawsuits — and for much of the wall, I should say; not all of it — by plaintiffs who allege serious environmental and safety issues.

Under those circumstances, federal agencies are continuing to review wall contracts and develop a plan to submit to the President soon.

It is — it is paused. There is some limited construction that has been funded and allocated for, but it is otherwise paused.

The following day, she reiterated the same points, stressing the administration's overall opposition to the border-wall concept, according to C-SPAN and a White House transcript.

"There are some components of the wall that had already been allocated," she said. "We don’t believe the wall is an answer. We have never believed the wall as an answer to addressing the challenges — immigration challenges at the border.

There’s a review underway of, kind of, where this funding had been allocated and not, but it’s currently paused and — for the most part."

Meanwhile, criticism of the Biden administration's alleged participation in border-wall construction surfaced among progressives. U.S. Rep. Ilhan Omar, a Minnesota Democrat, tweeted on April 7: "It's shameful and unacceptable for @POTUS to continue the construction of Trump's xenophobic and racist wall." In sum, the nature of the "limited construction" that could still take place on the wall under the Biden administration is unknown -- no evidence showed it would extend the barrier's length. For that reason, and those listed above, we rate this claim a "Mixture" of true and misleading information.