Did Biden Block Giving Aid and Admittance to Vietnamese Refugees in 1975?

Donald Rumsfeld’s book about the Ford administration, “When the Center Held,” recounts an interaction with then-Senator Joe Biden. 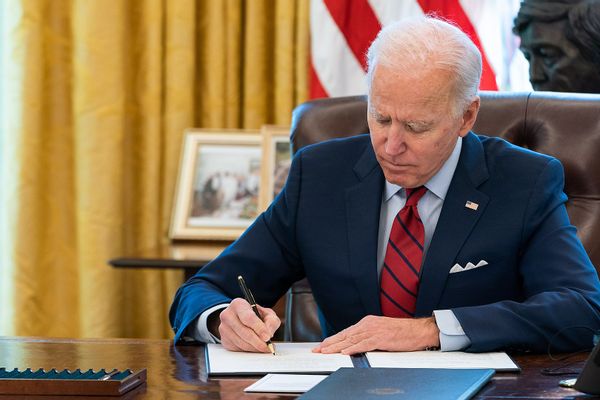 Claim:
In 1975, then-U.S. Sen. Joe Biden blocked aid to South Vietnam and did not allow admittance of Vietnamese refugees into the United States.
Rating:

Former Secretary of Defense Donald Rumsfeld said in his biography that in 1975 President Gerald Ford had tried to convince a number of senators to help refugees fleeing persecution and claimed Biden, along with other Democrats, “dissented.”

Biden did not vote against sending financial assistance to the South Vietnamese government toward the end of the Vietnam conflict, or block either the admittance of refugees to the U.S. or the distribution of funds to help them resettle -- in May 1975 he supported a bill allowing this to occur. His dissent regarding Ford's initiative was taken out of context by critics, as they did not include all of Biden's concerns. He had opposed an April 1975 aid package for South Vietnam because he argued those evacuation funds could be used as military aid and should be sent through multilateral channels. That April bill ultimately died in Congress.

As U.S. President Joe Biden’s administration took office in January 2021, Biden’s past voting record came under scrutiny, leading to misrepresentations by some partisan critics. Since late 2020, we received inquiries from Snopes readers who pointed us to a section from Donald Rumsfeld’s 2018 book, "When the Center Held: Gerald Ford and the Rescue of the American Presidency," which they said reported that Biden was opposed to welcoming South Vietnamese refugees into the U.S. and to providing them aid at the end of the Vietnam War in 1975.

Rumsfeld, who was Ford’s secretary of defense at the time, recounted a meeting on April 14, 1975, between Ford and a number of senators surrounding the resettlement of refugees from South Vietnam:

Meeting with a group of influential Senators, Ford repeatedly tried to sway them with what he believed deeply was our country’s moral responsibility to help refugees fleeing persecution. Repeatedly, a number of Senate Democrats dissented, including the young outspoken Senator Joe Biden.

[...] Senator Biden of Delaware then spoke up and got back again on the delays in getting Americans out. He also expressed hostility towards the idea of bringing out any South Vietnamese.

This recollection did not fully depict the context around Biden’s disagreement. At the time, Biden was part of the Senate Foreign Relations Committee. A declassified transcript from the Ford Library Museum details the full conversation. In the discussion, Ford, Secretary of State Henry Kissinger, and a number of senators were debating evacuations of Americans, Vietnamese refugees, and military aid to Nguyễn Văn Thiệu, who was president of South Vietnam (though he would resign a few days after this meeting):

President: If there isn't some indication of aid, the situation could disintegrate rapidly.

Sen. Jacob Javits (Republican): I will give you large sums for evacuation, but not one nickel for military aid for Thieu.

Sen. Frank Church (Democrat): I would think that if money is required to facilitate getting the Americans out, that can be worked out. What has not been worked out is the Vietnamese evacuees. Secretary Kissinger has said maybe there are 175,000. Clearly there is no legal inhibition to bringing some out along with Americans, but 175,000, with American troops involved, could involve us in a very large war. This raises the specter of a new war, thousands of American troops holding on in an enclave for a long period.

President: It is not envisaged that this would be for a long period but as quickly and precisely as possible.

Biden: What concerns us is that a week ago [Assistant Secretary of State for East Asian and Pacific Affairs, Philip] Habib told us we would be formulating a plan. A week has gone by and nothing has happened. We should focus on getting them out. Getting the Vietnamese out and military aid for the GVN [Government of South Vietnam] are totally different.
[...]
Kissinger: The plan for American evacuation is in pretty good shape. But we had a report that if we pulled out and left them in the lurch, we may have to fight the South Vietnamese. It was that we were concerned with and that is why we waited to go to Thieu so we didn’t do it in the context of a bug out. The second problem is getting American citizens out in an emergency. Third is the Vietnamese to whom we have an obligation. This is infinitely more complicated and large-scale. It requires cooperation from the GVN and maybe the North Vietnamese.

Biden: I feel put upon in being presented an all or nothing number. I don't want to have to vote to buy it all or not at all. I am not sure I can vote for an amount to put American troops in for one to six months to get the Vietnamese out. I will vote for any amount for getting the Americans out. I don't want it mixed with getting the Vietnamese out.
[...]
Sen. Hugh Scott (Republican): I agree to the proposal. One thing we haven’t discussed is the amounts. I think we need to discuss a figure.

Biden: I don’t want to commit myself to any precise number. How much money depends on how many we try to get out.

In the conversation, Biden was not arguing against refugees coming to the U.S., but instead was more concerned about details around the plan, particularly the specifics of military aid to the South Vietnamese government and funding for getting both Vietnamese refugees and Americans out.

On April 25, 1975, Biden opposed "The Vietnam Contingency Act of 1975" which would send emergency funds to South Vietnam for evacuation and relief efforts. Biden expressed his concerns over how aid money intended for evacuation was going to be used, and the limits of the powers of the U.S. president. On April 23, 1975, in a speech on the Senate floor, Biden argued that the president had constitutional authority to evacuate U.S. citizens, but the evacuation of noncitizens was an entirely different matter that should be negotiated "through organizations that are available, and through diplomatic channels that we could use."

In the same speech in the Senate, he argued that "there is no question in anybody's mind [...] that the bill's section 2, containing $100 million, labelled as a 'contingency fund' may not be, but clearly could be, used for military aid to the South Vietnamese government." He argued that $100 million in the evacuation contingency fund was "not a diplomatic channel," and would even "aggravate" the situation, which he described as the North Vietnamese "[continuing] to tighten their military noose around Saigon [...] they are in a position today to interdict Tassonhut airport." Humanitarian aid, he said, should be sent through "multilateral organizations." The aid package eventually died on the House floor anyway, and days later the South Vietnamese capital fell to the North Vietnamese army.

But in May 1975 Biden voted in favor of a resolution “Expressing the sense of the Senate to welcome to the U.S. the latest refugees from South Vietnam and Cambodia.” In late May 1975, Biden was not present to vote for H.R. 6755, the “Indochina Migration and Refugee Assistance Act,” which is not the same as a “Nay” vote. But as a member of the Senate Foreign Relations Committee, he approved the bill in order to release it to the floor for a final vote. He, along with the majority of the committee, did so with an amendment and a “favorable recommendation.”

Many in the Vietnamese American community still believe that Biden did not support refugee resettlement and in October 2020, ahead of the U.S. presidential election, in a bid to attract their support, Biden addressed this in an op-ed in a Vietnamese language newspaper:

I am very proud to support the historical law, which brought the first 130,000 refugees from Vietnam, Laos, and Cambodia to the United States in 1975 and passed a resolution welcoming them. I voted to increase the budget to help the new Vietnamese settle and I have co-sponsored [the law] that led to the formation of the immigration system under the current refugee status.

Given that Biden was opposed to Ford providing more military and humanitarian aid to South Vietnam around the time the conflict was going in favor of the North Vietnamese over his concerns for how it would be used, but not opposed to refugee resettlement in the U.S. as well as aid for the resettlement of these refugees, we rate this claim as “Mostly False.”

Feb. 16, 2021: Updated to reflect timeline of inquiries we received from Snopes readers.