Was This Bible Found at the Bottom of the Ocean?

The intact recovery of seemingly fragile objects from the ocean's depths has long fascinated the public imagination. 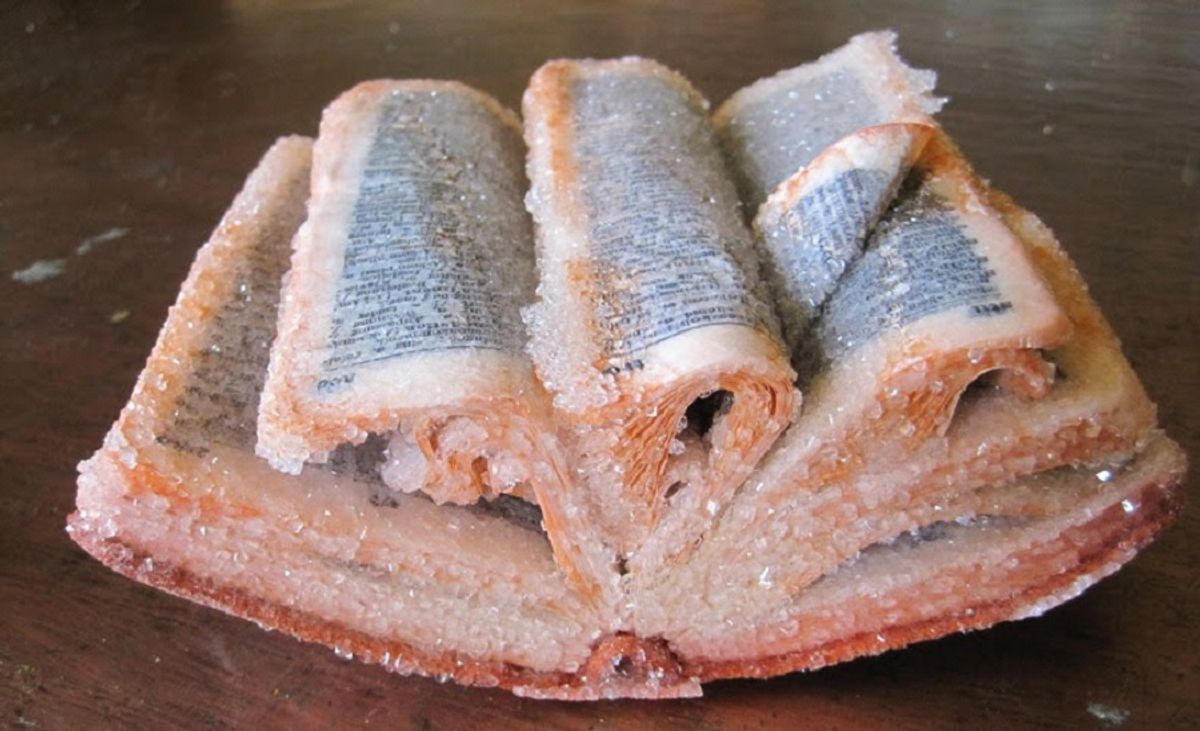 Claim:
A photograph shows an encrusted but readable Bible found at the bottom of the ocean.
Rating:

Claims of Bibles being found undamaged and intact at the site of disasters (e.g., fires, shipwrecks) that destroyed nearly everything else around them is a common religious trope, one often likened to a modern-day form of miracle.

One putative instance of that phenomenon which is frequently shared on social media is a photograph of an encrusted book described as an "ancient Bible" that was "found at the bottom of the ocean" and yet remained "still readable":

In fact, the pictured object was not a Bible, nor was it discovered in the depths of any ocean. The tome was actually a German-English dictionary used as part of a crystallization experiment described and pictured in a 2014 blog post.

The experimenter, Catherine McEver, described on her "Stuff You Can't Have" blog how seeing crystallized books during a maker studio tour in San Francisco inspired her to engage in some artistic crystallisation experiments of her own using books and other paper ephemera:

Interest in crystallization was piqued by a maker studio tour in San Francisco, during which I saw artist Alexis Arnold's crystallized books made using 20 Mule Team Borax. They were enchanting and I wanted to know how it was done, but she was charging $400 for a how-to workshop. Upon googling after arriving home I found that the 20 Mule Team Borax website offers the dead-simple instructions for growing crystals absolutely free, and a box of Borax from the local supermarket costs less than $6.

The formula:
- Use a glass or porcelain container large enough to immerse whatever object you want to crystallize.
- Boil water, and make a super saturated solution in your container using 1 cup boiled water per 3 tablespoons Borax.
- Immerse object (and in the case of the book, arrange pages using chopsticks) and wait for crystals to grow.
- When you think it's crystallized enough, remove from solution and dry on drying rack. The book shown took less than 24 hours.

The end result is a fixed object - crystallized and surprisingly heavy.

McEver performed similar crystallization experiments on objects such as reading glasses, photographs, seashells and rocks, and even fairy dresses.