Did Berry Global Forbid Employees from Eating Lunch in Their Cars? 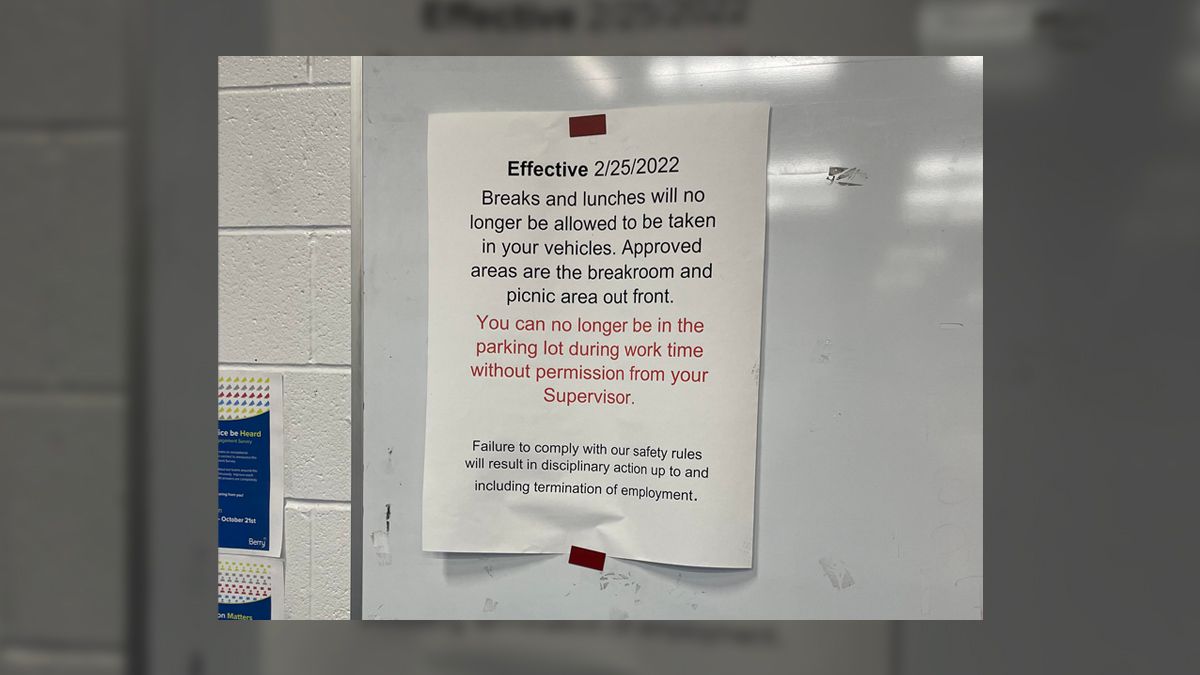 Claim:
The Berry Global company posted a sign that stated a policy forbidding employees from taking their breaks and lunches in their cars.
Rating:

On Oct. 5, 2022, a picture was posted on Reddit that appeared to show a curious company policy. According to the photograph, a sign was posted on a whiteboard that said employees would no longer be allowed to eat their lunch or take breaks in their cars. It also forbade employees from spending time in the company's parking lot without permission.

The post was later deleted, but the full-size photograph was still visible in a capture from Archive.org.

Off to the left of the sign were two flyers that showed the Berry Global logo, which Reddit commenters concluded was the company behind the policy. Berry Global describes itself as "leaders in plastic packaging manufacturing, process, and sustainable product innovation and design."

We contacted Berry Global via its media inquiries email address to ask several questions. However, we did not receive a response.

Aside from the possibility that the sign displayed a Berry Global company policy, we would like to note that we have initially seen no reason to believe that the picture itself was doctored. The bolded portion below appeared in red on the piece of paper:

Breaks and lunches will no longer be allowed to be taken in your vehicles. Approved areas are the breakroom and picnic area out front.

You can no longer be in the parking lot during work time without permission from your Supervisor.

Failure to comply with our safety rules will result in disciplinary action up to and including termination of employment.

Reddit commenters discussed the meaning of the sign. Some users made jokes. Others pointed to the likely important fact that the sign specifically mentioned the company's parking lot and "safety rules."

One user said, "The stipulation is the business parking lot. I would just drive some place nearby and have lunch in my car there then. I used to do that all the time when we would bomb out on our lunch breaks back in the day anyways."

Another Reddit user posted these theories: "Every company I’ve worked for with a policy like this say it’s a safety thing. I’m not 100% sure but it’s possible if something happens to you on the clock the company could be held liable? So that policy is more so just to cover their asses. My other theory is that they just want to keep you close enough to the job site that they can just call you back in on a moment's notice. My old job required us to keep our radios on during breaks for that exact reason."

The photo was posted to the r/antiwork subreddit. The description of the forum read, "A subreddit for those who want to end work, are curious about ending work, want to get the most out of a work-free life, want more information on anti-work ideas and want personal help with their own jobs/work-related struggles."

On Oct. 24, 2022, the rating for this claim was changed from "Research In Progress" to "Unproven" after we did not receive a response from Berry Global.