"As long as we reward people who break laws, they will continue to break laws." 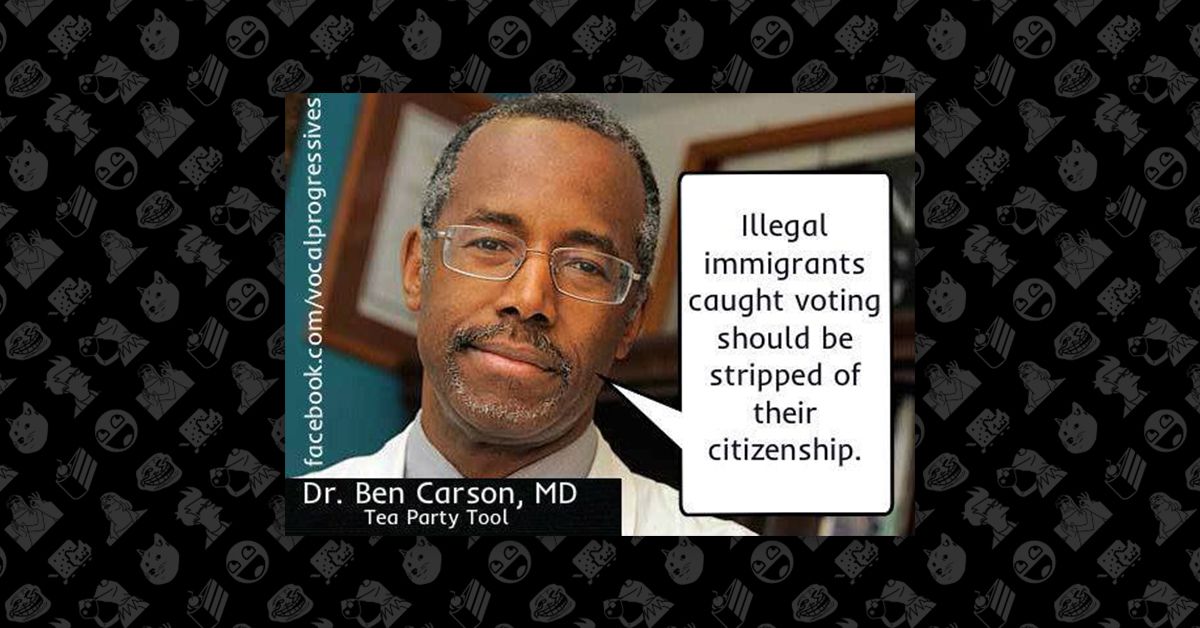 Claim:
Ben Carson said that illegal immigrants who get caught voting should be stripped of citizenship.
Rating:

An image macro featuring a picture of 2016 Republican presidential candidate Dr. Ben Carson alongside a quote purportedly uttered by him about how illegal immigrants should be stripped of U.S. citizenship if they get caught voting fraudulently was frequently circulated on social media in 2016: The reproduced quote was a slightly paraphrased version of a sentence Carson wrote in a 2014 opinion piece for WND about immigration reform:

As long as we reward people who break laws, they will continue to break laws. We do need a continual flow of immigrants, but choosers need not be beggars. We make decisions based on our needs. People who refuse to comply with the rules must forfeit chances of legalization in the future. Anyone caught involved in voter fraud should be immediately deported and have his citizenship revoked. The point is this: We must create a system that disincentivizes illegal immigration and upholds the rule of law while providing us with a steady stream of immigrants from other nations who will strengthen our society. Let’s solve the problem and stop playing political football.

Although Dr. Carson wrote that "anyone" (rather than "illegal immigrants") involved in voter fraud should be deported and stripped of citizenship, the context in which the sentence appeared clearly suggested the word "anyone" referred specifically to (illegal) immigrants.

The bolded sentence appeared on WND when the article was originally published on 11 November 2014 but was later removed and does not currently appear in the online version. According to archived versions of the page, the sentence was removed within a few days of publication.

Although Dr. Carson's gaffe may have been quickly scrubbed by WND, web sites such as MSNBC documented the curious statement prior to its removal:

Of course, Carson’s edict doesn’t make sense: If these are non-citizens, as the context suggests, how can they have their citizenship revoked? If they’re citizens, where are they being deported to?

While one could argue that the statement was a simple mistake that was quickly corrected, it should be noted that the same sentence also appeared in Carson's 2015 book What I Believe: A Collection of My Syndicated Columns.

The most charitable interpretation of the statement we can discern — which we do not know Dr. Carson to have offered — is that he meant to say that any non-citizens caught voting illegally should forfeit all opportunity to become naturalized U.S. citizens in the future.