Is "Baron Trump's Marvelous Underground Journey" a Real Book from the 1890s? 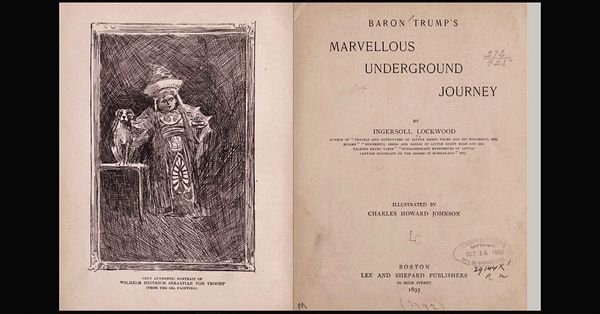 Forget for a moment the seemingly endless series of revelations about the Trump White House's staffing woes, the Russia investigation, and the Seth Rich conspiracy. A pressing matter, largely ignored by the mainstream media has come up: Is Donald Trump a time traveler?

The question has been circulating on conspiracy theory web sites for several months and is backed by various pieces of "evidence" (such as Donald Trump's uncle John Trump's purported relationship with Nikola Tesla). Now a series of books published over century ago is receiving attention for their seemingly all-too-eerie connections to the Trump family. The books, one of which is titled Baron Trump's Marvelous Underground Journey, have been discussed on both reddit and 4chan:

Baron Trump's Marvelous Underground Journey, and 1900: or, The Last President, are indeed real books by writer Ingersoll Lockwood. (We haven't been able to uncover any evidence proving that Donald Trump and his family have access to a time machine, however).

Both of the books are archived by the Library of Congress and can be read in full on Archive.org. Baron Trump's Marvelous Underground Journey was published in 1893 and 1900: or, The Last President came out a few years later. According to the Encyclopedia of Science Fiction, Lockwood penned at least one other book about the Baron Trump character, The Travels and Adventures of Little Baron Trump and His Wonderful Dog Bulgar, which was published in 1890.

A July 2017 article in Newsweek noted several prescient-seeming connections, such as the novel's Russian setting, a character named "Don," and a "Fifth Avenue Hotel" in New York City, where Trump Tower currently stands:

There are some incredible connections to be made to the first family of the United States and Lockwood’s novels from the turn of the 19th century. For starters, the main character’s name is the same as President Donald Trump’s son, albeit spelt differently. Trump’s adventures begin in Russia, and are guided thanks to directions provided by "the master of all masters," a man named "Don."

Before leaving for his voyage through the unknown, Trump is told of his family’s motto: "The pathway to glory is strewn with pitfalls and dangers."

But by Lockwood’s third novel, The Last President, things become even more eerily linked to the present day.

The story begins with a scene from a panicked New York City in early November, describing a "state of uproar" after the election of an enormously opposed outsider candidate.

"The entire East Side is in a state of uproar," police officers shouted through the streets, warning city folk to stay indoors for the night. "Mobs of vast size are organizing under the lead of anarchists and socialists, and threaten to plunder and despoil the houses of the rich who have wronged and oppressed them for so many years."

"The Fifth Avenue Hotel will be the first to feel the fury of the mob," the novel continues, citing an address in New York City where Trump Tower now stands. "Would the troops be in time to save it?"

However, some of these connections were slightly exaggerated or outright misstated. For one, the main character is called Baron Trump not because his name is Baron but because he is a baron — in other words, that's his title. The book begins with a "Biographical Notice of Wilhelm Heinrich Sebastian Von Troomp, Commonly Called Little Baron Trump":

As doubting Thomases seem to take particular pleasure in popping up on all occasions, Jack-in-the-Box-like, it may be well to head them off in this particular instance by proving that Baron Trump was a real baron, and not a mere baron of the mind.

Newsweek similarly mistakes the Don Fum character's honorific for his name, calling him "a man named 'Don.'" In fact, "Don" is a Spanish honorific meaning "Mr.," and the character (a "learned Spaniard") was introduced by Lockwood on page 2 of Baron Trump's Marvelous Underground Journey:

It so happened at the time of Bulger's low spirits that the elder baron had, through the kindness of an old school friend, come into possession of a fifteenth-century manuscript from the pen of a no less celebrated thinker and philosopher than the learned Spaniard, Don Constantino Bartolomeo Strepholofidgeguaneriusfum, commonly known among scholars as Don Fum, entitled "A World within a World."

Finally, the book mentions"The Fifth Avenue Hotel," meaning that it shares a street with Trump Tower. Since Fifth Avenue is, a well-known part of New York that has been the site for several high-end restaurants, shops and hotels since the late 1800s (the Waldorf–Astoria was constructed on Fifth Avenue in 1893), this detail seems to be more a reflection of the time it was written, and less a prescient note of where Trump Tower would eventually be constructed.

Although these books contain some seemingly bizarre coincidences, they are not evidence that Donald Trump has access to a time machine. Time travel conspiracy theories such as this one pick and choose material that supports their conclusions while ignoring everything else. For instance, these books also contain giant turtles, alternate dimensions, a battle with a big white crane, a dog named Bulgar, and a little smiling man frozen in time. Since these aspects have no clear connection to the Trumps, they are omitted from the conspiracy theory.