A TikTok user put a new spin on an age-old conspiracy theory. 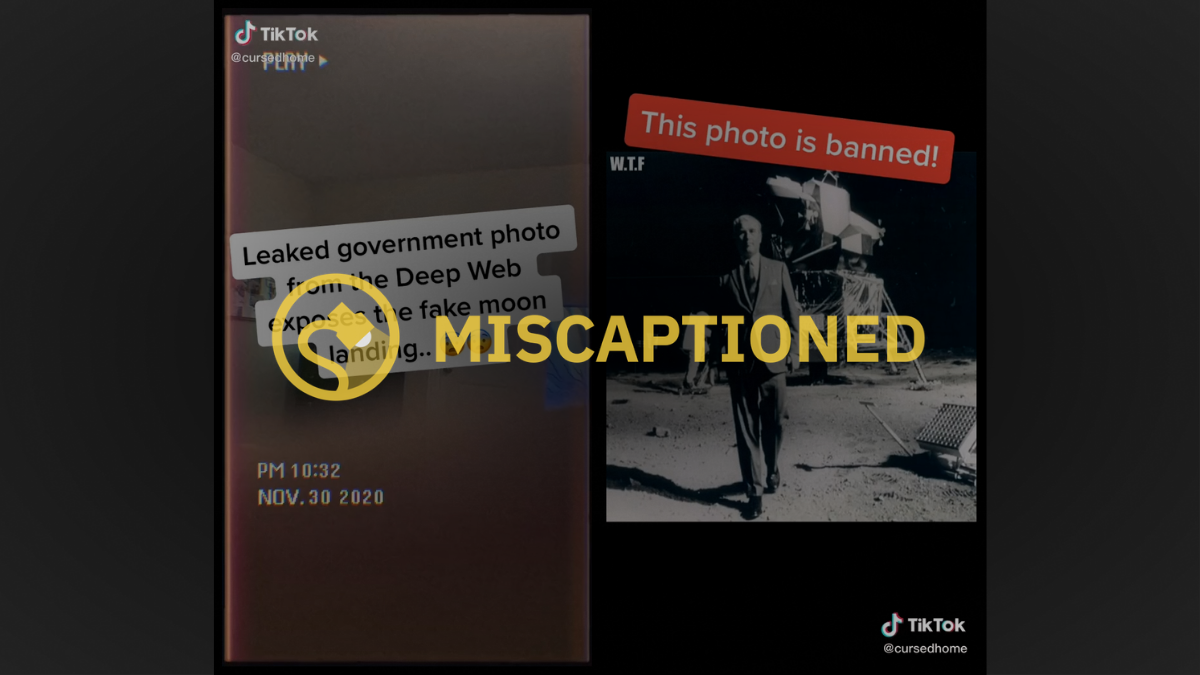 Claim:
A "banned" photograph of a man in a suit walking on "the moon" revealed the 1969 moon landing was a hoax.
Rating:

In December 2020, a TikTok user with a penchant for conspiracy-theory sharebait posted a short video that purportedly contained proof that the 1969 moon landing had been faked — a new twist on an age-old canard.

On Dec. 1, @cursedhome posted a clip that consisted of a black-and-white still photograph of a man in a suit walking on what looked like the moon, along with the labels "Leaked government photo from the Deep Web exposes the fake moon landing" and "This photo is banned!" The TikTok account in question is replete with nonsensical content about "inner earth civilizations," alien life, and COVID-19, much of it accompanied by sensationalist labels like "banned video," "this clip is banned," and "the government doesn't want you to see this banned documentary." The "faked moon landing" video was no different.

The photograph in question does not constitute proof that the moon landing was faked, is not banned, and is not owned by the U.S. government. Thus, @cursedhome managed to pack three significant falsehoods into just 16 words.

The photograph was taken in September 1969, after the successful Apollo 11 mission to the moon in July that year. It shows the controversial former Nazi aeronautics engineer Wernher von Braun, who was brought to the U.S. after World War II and played a key role in developing the rocket technology used in the Apollo 11 mission. In the photograph, von Braun is walking on a replica model of the moon landing at the Southeastern Fair in Atlanta, Georgia.

The photo was attributed to United Press International (UPI), a leading news agency at that time, and not the U.S. government, and it was republished by several regional newspapers, along with the following caption:

"Dr. Wernher von Braun, one of the leaders in America's space flight program, took a walk on the moon as he strolled through an exact replica of the Apollo 11 moon landing after officially opening the exhibition at Atlanta's Southeastern Fair." Previewing the fair, on Sept. 1, 1969, the Atlanta Constitution reported:

A detailed reenactment of man's first walk on the moon, including authentic moon surface with small craters and flat rocks and a replica of the landing module will be a major attraction at this year's Southeastern Fair, opening Sept. 25.

A tableau of the actual moon walk will be staged in the administration building of the fair, which has been cleared to make way for concrete, sand and other materials needed to build an authentic moon surface down to the minute details, including the footprints of the astronauts.

The next month, the Atlanta Constitution followed up with an article that included a photograph of two local gardening enthusiasts "planting" flowers on that same replica moon surface: The photograph is also not "banned" or available only on the "deep web." It is readily available online, searchable through search engines, and posted to mainstream social networks: