"I thought they were joking and laughed before I realized they were serious," the Reddit user who made the post said. 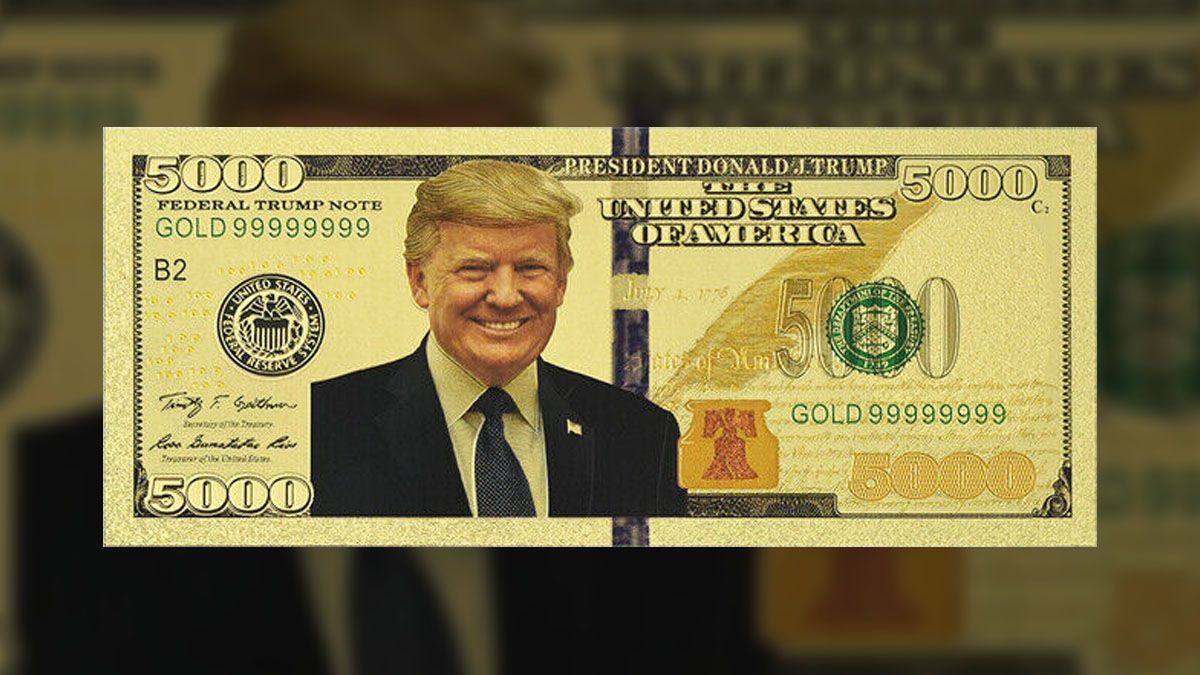 A Reddit user who claimed to work at a bank said that a couple tried to pass off a fake $5000 gold bill with Trump's face on it as if it was real money. (Image Via eBay)

We were able to confirm with the person who posted this story that they worked at the bank. During our conversation, the person did provide several additional details that some readers might find convincing. However, in the absence of any video or documentary evidence that would show that this interaction did occur, we were unable to issue a more definitive fact-check rating.

On Oct. 18, 2022, a Reddit user named u/alyrenna123 posted, "I work at a bank. A couple just came in wanting to cash this and claimed it was real gold and legal tender." The post, reportedly made by a Georgia bank employee, showed a plastic, gold-colored $5,000 bill that displayed the text "GOLD99999999" and bore the image of former U.S. President Donald Trump. The post has since been removed.

Readers emailed us to ask if this story was true. We established contact with u/alyrenna123, who provided evidence to us via email that confirmed employment at a bank, but declined to reveal the name of the bank or the city. The person did point to additional details that some readers might believe to be fairly convincing. However, in the absence of any definitive video or documentary evidence that would show that the interaction in the bank really happened, we have rated this claim as "Unproven."

Several users on Imgur.com reposted screenshots of the Reddit post before it was removed. In the picture of the "gold" $5,000 bill with Trump's face on it, a gray object was partially visible along the top edge of the photograph. "It's a bill-counting machine," u/alyrenna123 told us.

Some of the screenshots on Imgur.com showed what appeared to be the original top-voted Reddit comment, which also came from u/alyrenna123:

I thought they were joking and laughed before I realized they were serious. I told them it wasn't actual money and they argued it was and that it was from Trump himself. My supervisor came over and tried to tell them the same but they said you could tell it was real gold and it's from the U.S. Treasury and that Bank of America would cash it for them. I told them it was a scam and asked if they paid for it. They said yes and got really quiet when I asked them how much before they took it and left.

We confirmed with the Reddit user that this interaction did not occur at a Bank of America branch location. Rather, the couple purportedly mentioned the bank name because they were informed by an unknown person who sold them the bill that Bank of America would cash it. This led them to wonder why the bank in the story would also not accept the fake, plastic, and gold-colored, commemorative bill.

"After we refused to accept the money, the customer stated that Bank of America will accept [it], so why couldn't we," u/alyrenna123 told us. "We told him ok, he's welcome to go there if he'd like, but that he's being scammed and they would tell him the same thing we are. After they left, my supervisor said that Bank of America is a lot more strict than we are and would tell him absolutely not."

The Reddit post was deleted within 24 hours by u/alyrenna123. By that point, it showed a score of more than 150,000 points. For any readers who aren't familiar with how Reddit works, this number of points indicated that it was an extremely popular post among the website's users. It likely appeared on the front page of the website for a number of hours.

"I honestly didn't expect that post to blow up the way it did. I posted it for shits and giggles and it hit 150k in 12 hours and I freaked out," u/alyrenna123 told us during our chat. "I kept getting death threats and people saying they would 'dox' me. My supervisor saw the post, and while I did not post anything worthy of being punished, [said] it would be in my best interest to take it down."

Reddit commenters pointed to the fact that similar "gold" $5,000 bills with Trump's picture on them were available on eBay for a very small price.

For example, one listing showed a 100-count of "gold" $1,000 bills with Trump's image for $32 with free shipping. Many of the listings displayed their country of origin as China.

This story will be updated should any further information come to light.

alyrenna123. “I Work at a Bank, a Couple Just Came in Wanting to Cash This and Claimed It Was Real Gold and Legal Tender.” r/facepalm via Reddit.com, 18 Oct. 2022, www.reddit.com/r/facepalm/.