Back to the Future Rumors and Predictions

On "Back to the Future" day, a variety of rumors about BTTF's vision of life in 2015 were prominent on social media. 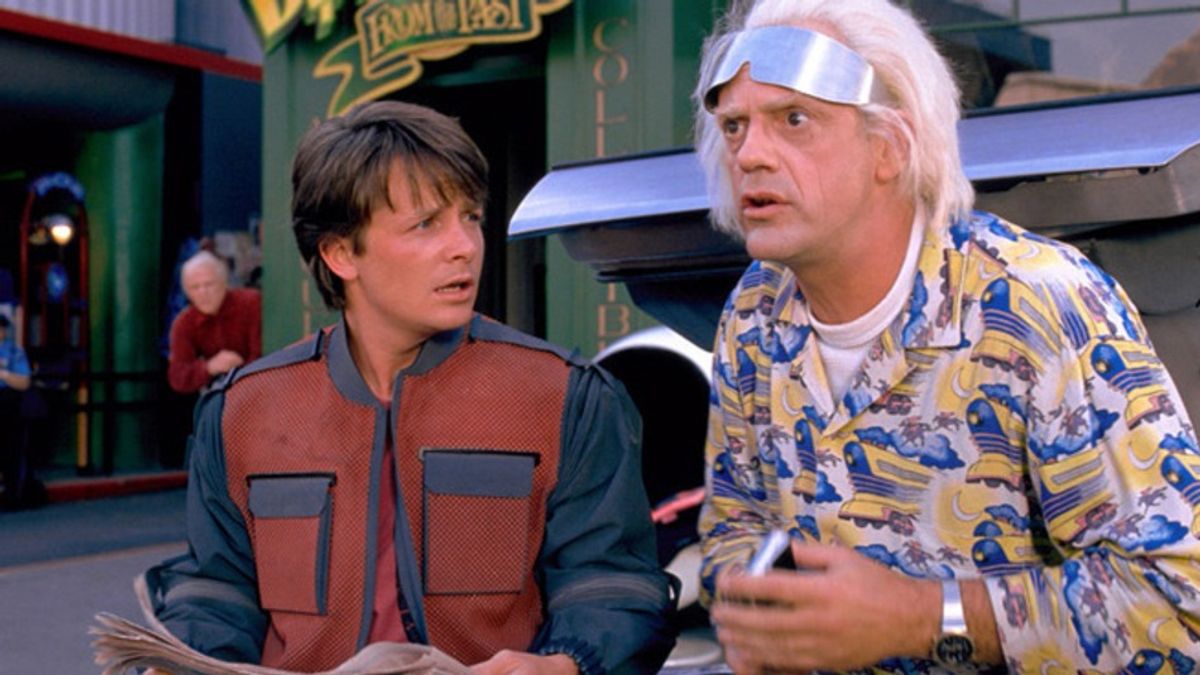 Claim:
Multiple social media rumors circulated on Back to the Future Day (21 October 2015): that Michael J. Fox was arrested for "insider sports betting," that Nike delivered a pair of self-tying sneakers, and that the Biff Tannen character was based on Donald Trump.
Rating:

On 21 October 2015, social media users marked what informally came to be known as "Back to the Future Day" — the then-distant date to which Michael J. Fox (as Marty McFly) traveled in the 1987 film Back to the Future II.

Amid memes, retrospective articles, and a multi-day trending streak of chatter about Marty McFly's return, several rumors about the Back to the Future (BTTF) trilogy, its legacy, and its stars circulated via social media. Given the general celebratory mood and heightened interest, some of those claims spread further and faster than they might have on any other day:

Fox aroused suspicion after achieving a statistically-impossible, perfect record on the site under the username NoChicken.

Authorities found an unusually worn copy of a sports almanac which was just recently printed and which has markings cataloging winning bets Fox has placed since the late 80’s.

“The operating theory is that the Back to the Future films were really documentaries from an original, prime timeline,” said NASA astrophysicist Barry Manilow. “The implications are heavy. It is suspected that we are living in an alternate 2015, as there are no flying cars and there are only four Jaws movies. We can only assume that we are forever stunted as a society. The amount of lives lost due to our lack of progress in technology and medicine is unfathomable. Worst of all, instead of hoverboards, this sad reality is limited to the Swagway.”

Most readers managed to pick out the multiple humorous references contained therein: the username "NoChicken," the use of a "sports almanac" (both nods to BTTF), and "astrophysicist Barry Manilow." Moreover, a disclaimer on Stubhill News advises viewers:

If you think Stubhill News is real news, you’re going to have a bad time.

Claim: Nike sent Michael J. Fox its first pair of self-lacing sneakers, which will retail in 2016 with proceeds to be earmarked for Fox's Parkinson's Disease foundation. On 21 October 2015, ABC News published an article titled "Nike Sending First 'Back to the Future' Self-Tying Shoes to Michael J. Fox." According to the network, Nike confirmed that Fox had been sent a pair of what they described as "self-lacing" sneakers. However the company was tight-lipped about the details, adding only that future versions of the product would be available at "auction" and promising further information in 2016:

Nike says that the future is here. The first person to receive a pair of the company's "Back to the Future" self-lacing shoes is the franchise's star Michael J. Fox, according to a Nike designer.

“We started creating something for fiction and we turned it into fact, inventing a new technology that will benefit all athletes," Nike president and CEO Mark Parker said in a statement today. The company said the 2015 Nike Mag is a limited edition release and will only be available via auction, with all proceeds going to the Michael J. Fox Foundation for Parkinson's Research. Additional details will be released in the spring, Nike said.

At this point, little is known about the sneakers purportedly gifted to Fox. The Michael J. Fox Foundation published an eight-second video in which the actor modeled the shoes:

So Nike says they gave Michael J. Fox a pair of self-lacing sneakers; but how (well) those sneakers work is unknown, and their auction-only availability suggests they exist only as an expensive limited edition and not as practical model expected to be widely available any time soon.

Claim: A Back to the Future II writer based the character of Biff Tannen on real estate mogul Donald Trump.

As Back to the Future Day approached, social media users inevitably drew parallels between the film's predictions of life in 2015 and the reality of today's 2015. Among the memes that arose in the weeks leading up to 21 October 2015 was one drawing comparisons between the movie's principals and real-life figures, such as those likening eccentric scientist Doc Brown to Bernie Sanders and ruthless businessman Biff Tannen to Donald Trump:

On 21 October 2015, The Daily Beast published an article titled "'Back to the Future' Writer: Biff Tannen Is Based on Donald Trump." That piece quoted Back to the Future screenwriter Bob Gale on the purported inspiration for Tannen's character:

So, Bob Gale — writer of Back to the Future Part II and man who helped predict the IMAX theater and the self-checkout line — in these past few months, were you thinking what we're all thinking?

"We thought about it when we made the movie! Are you kidding?” he says. “You watch Part II again and there’s a scene where Marty confronts Biff in his office and there’s a huge portrait of Biff on the wall behind Biff, and there’s one moment where Biff kind of stands up and he takes exactly the same pose as the portrait? Yeah."

Of course, in the movie, Biff uses the profits from his 27-story casino (the Trump Plaza Hotel, completed in 1984, is 37 floors, by the way) to help shake up the Republican Party, before eventually assuming political power himself, helping transform Hill Valley, California, into a lawless, dystopian wasteland, where hooliganism reigns, dissent is quashed, and wherein Biff encourages every citizen to call him "America’s greatest living folk hero."

"Yeah," says Gale. "That's what we were thinking about."

Notably, Gale did a lot of talking around the film's October 2015 anniversary. But when CNN hosted a Back to the Future Q&A in July 2015, Gale had this to say about the inspiration for Tannen and McFly:

They were archetypes, with character bits drawn from people we knew, as well as some excellent contributions from actors Michael J. Fox and Tom Wilson.

Prior to that, Tannen's inspiration was partially credited to a separate person with whom creators Gale and Robert Zemeckis had both clashed:

Biff Tannen was named after a Universal Pictures executive named Ned Tanen who had been particularly rude to Robert Zemeckis and Bob Gale during a script meeting about the film I Wanna Hold Your Hand (1978).

The notion that Trump formed the total or partial basis for Tannen appeared seemingly out of the ether. Although the Wikipedia page devoted to the character prominently featured that explanation, an archived version from 16 October 2015 made no mention of it.

Trump was somewhat notable in 1985 (even rating a GQ cover), but his persona then didn't match very well with the character of Tannen. Trump's later grandiose, reality-show style brand had yet to develop (and while his style had always been somewhat garish, it was never very similar to Tannen's): It's true that Gale claimed in October 2015 that Biff Tannen was based (entirely or in part) on Donald Trump. It's even possible that Gale believed that the character's inspiration hinged on a real-life figure who (in his view) came to closely match Tannen in 2015.

But Trump was a relatively minor celebrity in 1985, known mostly in the New York City area as a real estate developer. Trump's reality TV show The Apprentice was still many years away, as was any serious indication Trump would ever leave real estate to enter politics. If Trump indeed crossed Gale and Zemeckis' minds when Tannen was being developed in the years prior to the 1985 film, neither thought to mention it until after Sanders/Trump comparisons began appearing on social media in late 2015.

A minor-league Manhattan businessman very well could have appeared on the radar of two Hollywood producers, but the "prediction" of Trump by Back to the Future appeared to be retrofitted to 2015's current events, not prescience on the part of the filmmakers in 1985.