Is This an Authentic Photo of a Baby Shark With a ‘Human Face’?

If true, it wouldn't be the first deformed shark to make waves on the internet. 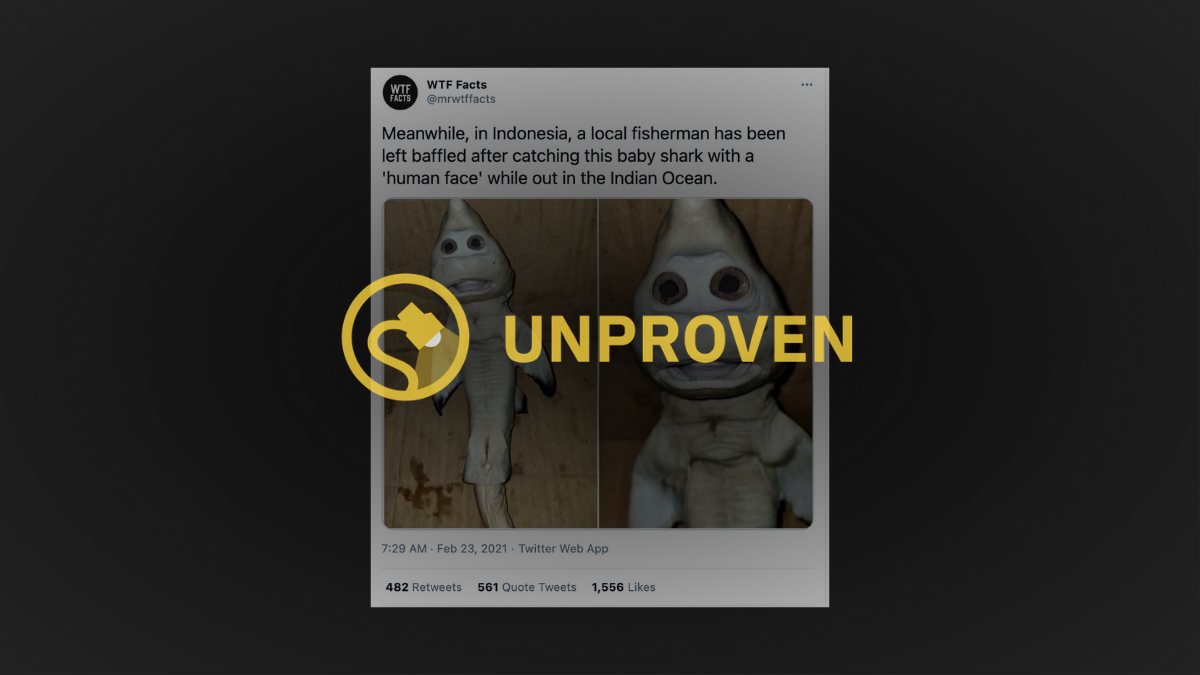 Claim:
An image that went viral in February 2021 showed an actual baby shark with a “human face” that was caught by a local fisherman off the coast of Indonesia.
Rating:

A viral photo surfaced in late February 2021 that reportedly showed a baby shark with a “human face." The photograph made the rounds of social media by users who compared the alleged shark to the Michelin Man, and was featured in a number of publications, including tabloids like The Sun, New York Post and Daily Mail.

Coverage of the photograph was first reported on Feb. 23 by Indian publication Viva, which noted that a fisherman by the name of Abdullah Nuren captured the supposed mother of the deformed shark baby in his trawl net while fishing off the coast of Indonesia on Feb. 20.

“The next day I split the belly of the mother shark and found three cubs in its stomach. Two like the mother, this one looks like a human face," Abdullah reportedly told the publication. Snopes contacted Viva for further details about the species of the mother shark, and reached out to Abdullah, but did not hear back by the time of publication.

A video of the shark was published by Newsflare, an aggregator of viral content that pays its contributors for providing user-generated stories. The publication did not appear to have independently vetted the video for authenticity.

Malformations of shark species are not entirely unheard of. In 2011, a fisherman in the Gulf of California caught a pregnant dusky shark and when he cut open the catch, found a one-eyed albino shark fetus measuring 22-inches-long, reported National Geographic at the time.

Snopes also spoke with Luiz Rocha, curator of fishes at the California Academy of Sciences, who cited two studies that confirmed it is possible for such a shark to exhibit deformities seen in the "human-faced" shark. One such condition that Rocha said could be responsible for the condition is synophthalmia, or partial cyclopia, which he believes to be real and exhibited in the photograph.

"Scientists have been aware of these conditions for quite some time, what is different now is that photos that show it clearly are becoming viral because of the reach of social media. Not something all that rare though," said Rocha.

Taylor Chapple, assistant professor of the Oregon State University Department of Fisheries and Wildlife, told Snopes that the video did not show enough of the shark to allow for a species verification or to determine whether the photograph itself was legitimate. And while it’s entirely possible that the fetal shark in question had experienced a deformation, it cannot be verified with certainty.

“Just like any living thing, sharks can have malformations and mutations in their genetic code that are presented during development,” said Chapple. “Obviously in the wild most of these are not viable, which I’m guessing would have been the case with this animal, so we never see them unless they are caught in utero.”

Identifying the shark is difficult without a dorsal view and further demographic information, including characteristics of the supposed mother. Indonesia’s Ministry of Marine Affairs and Fisheries reported in 2020 that there are at least 117 species of sharks and rays found in the waters surrounding the southeastern Asian nation.

Sharks reproduce through three main methods, according to the nonprofit conservation organization Shark Trust. Some sharks are known to lay eggs in what is known as oviparity, while others reproduce through ovoviparity, which is when the female carries the eggs inside of her. Once developed, ovoviparious eggs will hatch inside of the mother, who will then give birth to the young. Other sharks will give live birth through what is called viviparity. This is the most advanced form of reproduction and allows for the baby shark to develop within its mother's body before being birthed.

So, while it is entirely possible that this photograph accurately depicts an unborn shark cut from its mother’s womb, Snopes was not able to independently verify its authenticity, and as such, we rate this claim as “Unproven."