Is This Video of a Baby Being Violently Dunked in Water Real?

A video showing an apparent "violent baptism" may appear shocking to some viewers, but the enthusiastic religious practice isn't unheard of. 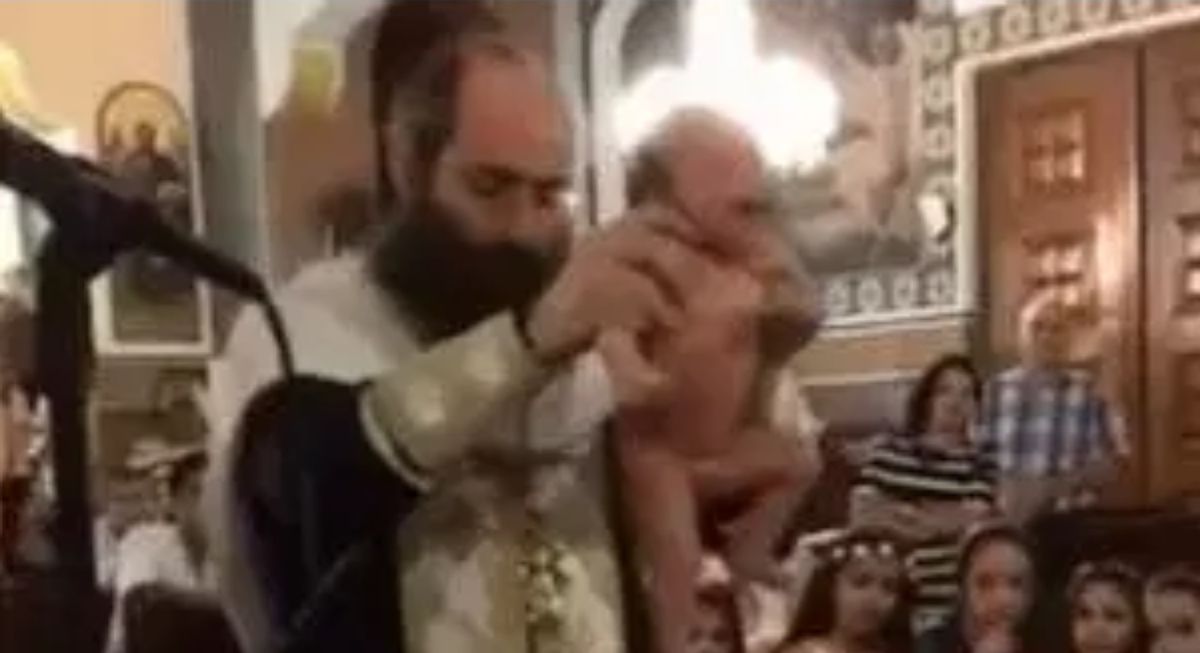 Claim:
A video shows a priest aggressively dunking a baby underwater during a baptism ceremony.
Rating:

A video showing a baby being dunked repeatedly -- and somewhat violently -- underwater during what appears to be a baptism ceremony is frequently shared online by bewildered viewers:

We have not been able to track down the specifics of this particular video. However, it isn't uncommon for babies to be dunked underwater (although perhaps not this aggressively) during the baptismal process in certain regions of the world.

The earliest instance of this footage that we could track down was posted to Twitter on 8 May 2018. Although that version was not accompanied by any information about where and when the events depicted were captured, a subsequent report published by the UK tabloid The Sun stated that the video was taken in Ayia Napa, Cyprus, at a Greek Orthodox church.

We have not been able to confirm this information. Furthermore, the Greek Orthodox Archdiocese of Australia said in a statement to the website Greek City Times (GCT) that the man seen in the video was not a Greek Orthodox priest, and that they did not condone the actions captured on camera:

The statement sent to GCT also adds, “Such practices are not condoned in the Greek Orthodox Church; not only are they inappropriate but they are also nothing short of being physically abusive. Whilst the early Church practice by full immersion is carried out to this day in the Greek Orthodox Church, this is typically done by seating the infant in the baptismal font and gently pouring water over their head in much the same way that they might be bathed by their parents.”

The clip in question is reminiscent of another "shocking" video from the Associated Press that was taken at the Trinity Cathedral in Tbilisi, Georgia, during a mass baptism to celebrate the Epiphany in January 2017:

Hundreds of children were baptised in Trinity Cathedral in Tbilisi on Thursday. The mass baptism was conducted on the day Orthodox Christians celebrate the Epiphany. As per the tradition, Patriarch of all Georgia Ilia II will become the godfather of all the children baptised during the ceremony. The initiative is aimed at boosting baby births in a country with a population of 4.5 million. According to polls, the Patriarch is believed to be the most influential figure in Georgia.

The Associated Press reported that the practice of mass baptisms began at this Georgian church in 2008 and helped spark a "baby boom" in the country:

Patriarch Ilia II has promised to become the godfather of all babies born into Orthodox Christian families who already have two or more children. Since he began the mass baptisms in 2008, he has gained nearly 11,000 godchildren.

Parents of the 400 babies baptized by an array of priests Sunday said the patriarch was instrumental in their decision to have a third or fourth child.

"This is a wonderful day for my family," said Tamar Kapanadze, a 33-year-old father of four. "Our fourth son, Lashko, was baptized by the patriarch himself, and before this he baptized our daughter Liziko. This is why we decided to have a fourth child."

Here's another video showing a baby being repeatedly dunked during a mass baptism in Georgia, from 2016:

Although we have not been able to track down the specifics of this viral video, it's clear that the baptismal practice depicted isn't all that uncommon.