Is This Audio of Detained Children Crying for Their Parents? 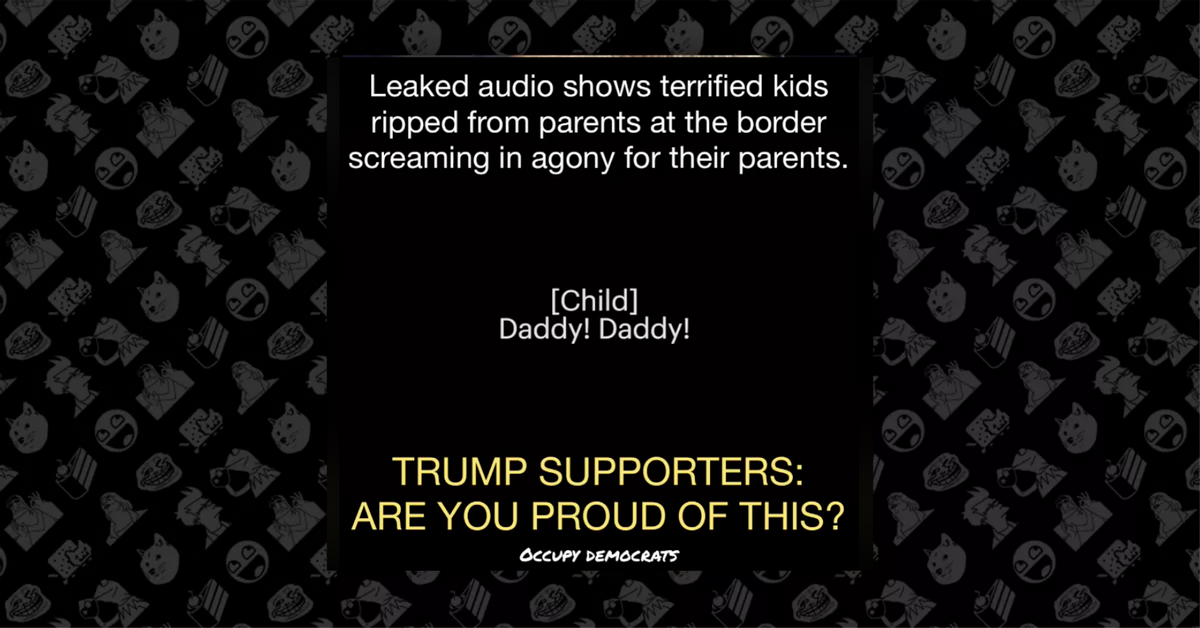 On 19 June 2018, readers began asking about an audio recording of distressed children in immigration detention centers, crying what sounded like "mommy" and "papa" in the custody of border authorities:

In regards to the audio of ththe crying children being detained at the boarder. I find it odd that the media now posting only "mommy" cries. Humm, a spanish child I would think would cry in their own language "mama'" and daddy "papi" A fake audio? It sure seems as though. This is all over the news right now.

Is the "leaked audio shows terrified kids ripped from parents at the border screaming in agony for their parents" true?

What is the provenance of the 7-minute audio clip that is circulating on Facebook titled "Leaked audio from a detention center housing immigrant children separated from their parents?" When and where was it recorded? Can anyone translate the Spanish?

Associated with it is a petition at https://action.aclu.org/petition/separating-families.

Thank you for your work to verify fact versus fiction!

A version of the recording was published to Facebook by the page Occupy Democrats on 18 June 2018. In that post, the mostly-Spanish dialogue was captioned in English and cries of "mami" and "papa" were captioned as "mommy" and "daddy" (many Spanish speakers call their mothers mami as well as mamá, just as many English speakers may refer to their mothers as mommy or mama or mom):


At the bottom, the text read: "TRUMP SUPPORTERS: ARE YOU PROUD OF THIS?" The post included the following caption:

EVERY American needs to hear this. ?

From ProPublica: "The desperate sobbing of 10 Central American children, separated from their parents one day last week by immigration authorities at the border, makes for excruciating listening. Many of them sound like they’re crying so hard, they can barely breathe. They scream 'Mami' and 'Papá' over and over again, as if those are the only words they know."

Occupy Democrats provided the name of the source (investigative journalism outfit ProPublica), but no link or any additional information. On 18 June 2018, ProPublica published an article (titled "Listen to Children Who’ve Just Been Separated From Their Parents at the Border") reporting that the outlet had obtained audio from inside a U.S. Customs and Border Protection facility.

An audio-only clip of crying immigrant children and border authorities uploaded with the original article was more than seven minutes long:


ProPublica's reporting detailed some dialogue captured in the recording:

... The baritone voice of a Border Patrol agent booms above the crying. “Well, we have an orchestra here,” he jokes. “What’s missing is a conductor.”

Then a distraught but determined 6-year-old Salvadoran girl pleads repeatedly for someone to call her aunt. Just one call, she begs anyone who will listen. She says she’s memorized the phone number, and at one point, rattles it off to a consular representative. “My mommy says that I’ll go with my aunt,” she whimpers, “and that she’ll come to pick me up there as quickly as possible.”

The outlet reported that the audio recording was captured at some point during the previous week inside an unidentified Customs and Border Protection detention facility by someone who wished to remain anonymous:

The audio obtained by ProPublica.... was recorded last week inside a U.S. Customs and Border Protection detention facility. The person who made the recording asked not to be identified for fear of retaliation. That person gave the audio to Jennifer Harbury, a well-known civil rights attorney who has lived and worked for four decades in the Rio Grande Valley along the Texas border with Mexico. Harbury provided it to ProPublica. She said the person who recorded it was a client who “heard the children’s weeping and crying, and was devastated by it.”

The person estimated that the children on the recording are between 4 and 10 years old. It appeared that they had been at the detention center for less than 24 hours, so their distress at having been separated from their parents was still raw. Consulate officials tried to comfort them with snacks and toys. But the children were inconsolable.