A viral anti-vaccine video mangles the science behind the production of a potential COVID-19 vaccine. 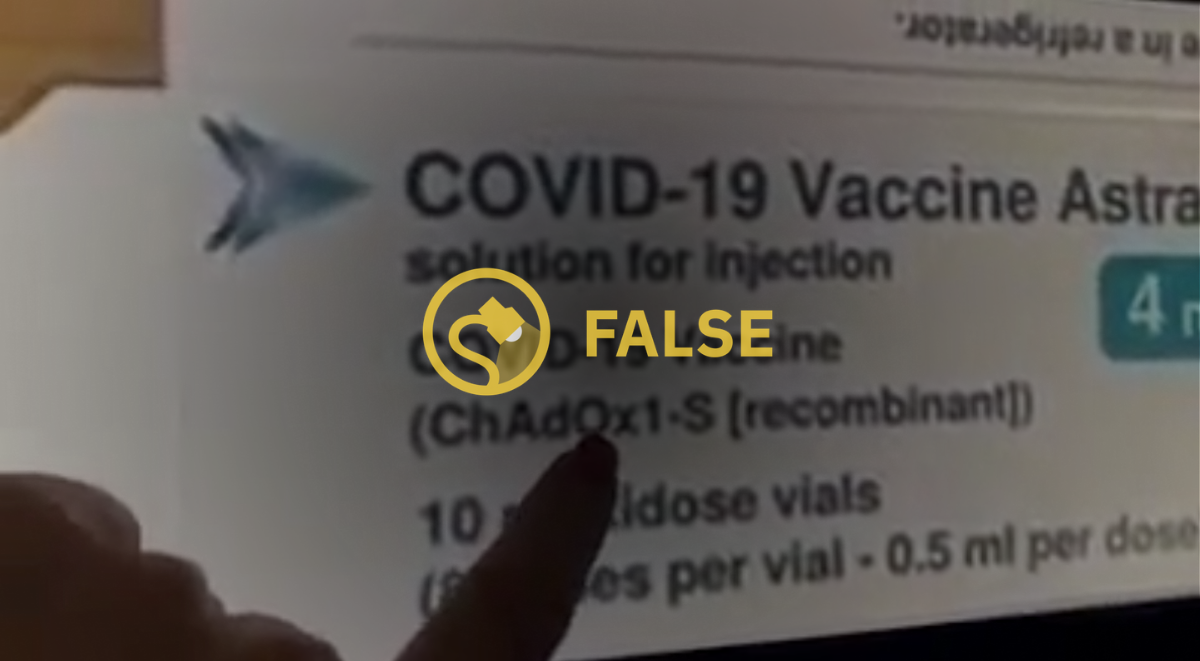 A viral video published in late November 2020 re-energized a common anti-vaccine talking point, alleging that AstraZeneca's coronavirus vaccine "contains" aborted fetal tissue. This conclusion, and other claims like it, are factually inaccurate and stem from a misrepresentation of how this and other vaccines are produced.

It is true that the AstraZeneca COVID-19 vaccine is created, in part, by growing a modified virus in cells originally derived from embryonic kidney tissue sourced from an abortion performed in the 1970s. Crucially, however, the vaccine does not "contain" this cellular material. The viral molecules grown in these cells are chemically and physically separated from the cells in which they were incubated and do not make it into the final product. Therefore, it is false to claim, as the video does, that the process of being vaccinated for COVID-19 with the AstraZeneca vaccine means being injected with "aborted fetal tissue fragments."

In this article, we will first explain what the AstraZeneca vaccine is, how it is produced, and why it has to be produced in this manner. We then explain why it is inaccurate to characterize the cell line used in the production of this vaccine as "aborted fetal tissue" by providing a detailed history of the cell line's creation and use.

The idea with any COVID-19 vaccine is to train your body's immune system to produce infection-fighting particles known as antibodies that are specifically capable of attacking the SARS-CoV-2 virus or some smaller component of it. The vaccines currently in development use a variety of different methods to achieve that goal. Two of the big players in the coronavirus vaccine hunt are the biotech companies Pfizer and Moderna. Their potential vaccines use small segments of messenger RNA engineered to produce a specific protein found in SARS-CoV-2. Once that protein is produced in the body, the immune system is trained to create antibodies capable of attacking it, thereby giving it a tool to fight the virus should a person be exposed to it.

The AstraZeneca vaccine similarly targets one specific part of SARS-CoV-2 virus, but it does so by injecting a genetically modified virus instead. As reported by The New York Times, "researchers at the University of Oxford built the vaccine using a kind of virus, called an adenovirus, that typically causes colds in chimpanzees." These researchers genetically altered that virus in two crucial ways. First, portions of its genetic code are deleted to make it unable to cause infection. Second, researchers added a portion of genetic code that makes the virus, once in a human body, produce the same spike protein found in SARS-CoV-2. The scientific name for this engineered virus is ChAdOx1 nCoV-1.

Once injected into the human body, the presence of that spike protein trains the immune system to recognize and attack anything with those spikes, including SARS-CoV-2. Further, one of the reasons for SARS-CoV-2's ability to cause illness is those very same spikes that bind to, pierce, and infect human cells. Training the body to neutralize this key tool with a non-infectious virus is the proposed mechanism of immunity imparted by the AstraZeneca vaccine.

It's one thing to engineer a tiny sample of this modified chimpanzee adenovirus, but it is an entirely different problem to create large quantities of it at scale. That's where the human cell line comes into play. Though the viral video falsely claims that a human cell line named MRC-5 serves this purpose, the vaccine is actually created with a cell line known as HEK293. These Human Embryonic Kidney cells are used as incubators or, as AstraZeneca calls them, "mini factories" for the rapid growth and multiplication of this modified virus. One of the most commonly used in the world and utilized in several other proposed COVID-19 treatments, this cell line was selected because they are uniquely capable of rapidly multiplying modified adenoviruses.

Although this engineered virus was grown in human-derived cells, those cells serve only as a growth medium and are not part of the final vaccine product. While extremely low concentrations of chemicals derived from the human cell line may be present in virtually undetectable amounts, that material is too broken down to be recognizable as human tissue. After the modified virus infects these cellular factories, they reproduce until the cells burst — a process that literally destroys the HEK293 cells. The viral particles are removed from what is left of the HEK293 cell detritus through a rigorous purification process involving both chemical purification and high-tech centrifugation.

For some religious groups and other opponents of abortion, a process that makes use of material derived — however distantly — from aborted embryonic fetal tissue is anathema to their moral views. To these groups, the cell line's origin story and history will likely not change that view. But to those whose objection to their use stems from a misguided belief that HEK293 cells are literally the cells of an aborted fetus, a history of the cell line could be illuminating.

HEK293 cells were not originally created to serve any utilitarian purpose. Instead, they were a byproduct of an attempt to understand why some adenoviruses seemed to cause cancer while others did not. In the early 1970s, when cancer research was in its infancy, many researchers studied the ability of certain viruses to transform a cell's function and appearance as part of this line of work. Frank Graham, a Canadian researcher who was then a postdoc working at the University of Leiden in the Netherlands, had already transformed several nonhuman cells with adenovirus DNA, and he was looking to see if the same could be done with human cells.

In that lab, Graham had access to embryonic kidney cell samples from an aborted fetus. Documentation regarding human samples such as those found in Graham's lab was not up to modern standards, but we know the abortion was performed at a hospital in Leiden, that the mother was healthy and elected to have the abortion, and that the father was unknown. As part of Graham's effort to transform these human kidney cells with adenovirus DNA, he twice attempted to create a colony of cells transformed by the virus. He was successful, to a degree, on his second attempt.

As described in his 1977 paper, Graham found that the human kidney cells were hard to transform. "Attempts to isolate these colonies failed," he wrote, "but in one case the original dish was retained and eventually (about day 75) a few transformed cells could again be observed in the area of the dish where the colony first developed." It was these "few transformed cells" that Graham spent months attempting to grow into a viable colony of cells. Growth was steady at first, but almost a year into the process the colony stopped growing. Only a few viable cells survived this "crisis." Those that did, however, became the stock for the original HEK293 cell line.

Though he didn't know it at the time, the cells that survived did so because, fortuitously, they expressed an enzyme not normally present, thereby allowing them much faster growth. Observing this newly adapted line of transformed cells, Graham remarked in his original paper that "one characteristic of 293 cells which makes them of considerable usefulness for studies with adenoviruses is that they can be superinfected by ... human adenovirus[es]." In other words, these cells' transformation allows them to grow large quantiles of viral molecules in a short period of time. Crucially for AstraZeneca, these cells can also be superinfected with the engineered virus derived from a chimpanzee adenovirus, making them the perfect "mini factories" to grow them.

All HEK293 cells are derived from this original crisis-surviving colony, but several scientific companies have further modified HEK293 cells for more specific uses. In the case of the AstraZeneca vaccine, a form of HEK293 cells created by Thermo-Fisher named T-REX-293 Cells are used. These cells, modified from the original HEK293 line, offer an additional benefit: they inhibit the virus growing inside them from expressing the proteins they are programmed to create. This means the production of those spike proteins does not occur during the creation of the vaccine but only after it has been injected into a patient.

This history is not meant to minimize the human origin of the cells used in the vaccine production process. Instead, it is meant to challenge the central claim in the viral video: that getting the vaccine means injecting "aborted fetal tissue fragments" into your body. Suggesting these cells — which are not only myriad replications removed from the original source tissue, but also the specific cellular descendants of one single altered colony of modified cells created in 1973 — to be actual "fetal tissue" is a stretch, even if these cells made it into the final vaccine product.

However, because those cells are not even a part of the final vaccine product, the claim is false.