Are White People Being Assaulted at Showings of 'Black Panther'?

Online trolls tried to push claims of violence, but they were quickly foiled by others on social media. 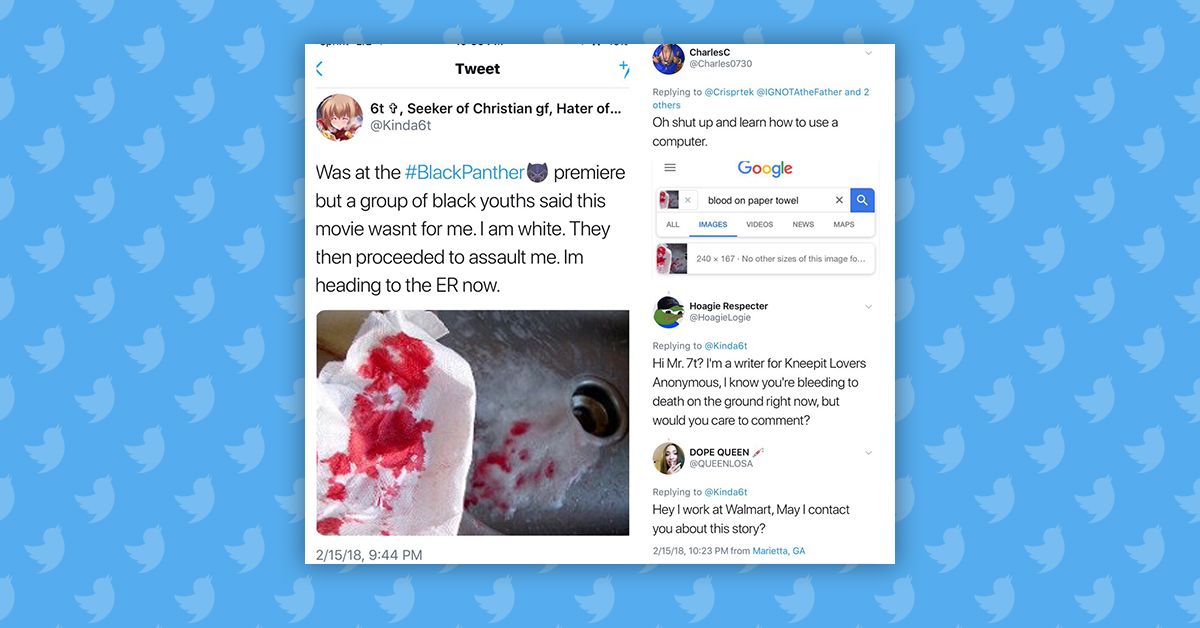 Claim:
White people have been attacked by black filmgoers at showings of "Black Panther."
Rating:

As the Marvel Entertainment film Black Panther opened in the U.S. in February 2018, some social media users attempted to put a damper on the occasion by posting fake accounts of anti-white attacks only to be foiled by other users' photo-sleuthing skills.

One photo posted on Twitter reportedly generated around 400 retweets before being debunked. The image showed a towel soaked in blood over a sink alongside the caption:

Was at the #blackpanther premiere but a group of black youths said this movie wasnt for me. I am white. They then proceeded to assault me. Im heading to the ER now. But other users quickly noted that the picture was actually posted on the photo-sharing platform Flickr in 2009.

Twitter suspended the account behind that fake post, as well as the one that attempted to pass off a picture of a 19-year-old Swedish woman's bloodied face. She was actually attacked at a bar in Malmo, despite false claims the photo was taken after an "assault" connected to the film, which features a nearly all-black cast: Another user attempted to pass himself off as 23-year-old Michael Voller, who was hit in the face in London in May 2017 in an attack that was reportedly precipitated by anger over the results of a FA Cup soccer semifinal match: There is no indication that these posts are coordinated, but another social media user passing themselves off as the victim of an assault — this one using a photo taken from a British makeup artist's porfolio — showed off their "work" on a message board in the web site 4chan: And yet another claimed in a Twitter post that his "older brother Kenan" suffered a ruptured eardrum after an attack: But that account was also debunked by users who showed that the picture attached was actually taken from a story about an actual assault in Dallas, Texas.

Despite these types of smear attempts, reports estimated that Black Panther was on track to earn between $200 million and $205 million at the box office for its opening weekend.

Cockerell, Jennifer.    "Image Released of Spurs Fan who Attacked Fellow Supporter He Thought Was a Chelsea Fan."    The Independent.    17 May 2017.

Update [19 February 2018]: Added another example of a fake "attack" post that was debunked on social media.