Were These Children Separated From Their Parents Under Obama?

A 2014 photograph of unaccompanied minor immigrants is misleadingly being described as showing children separated from their parents by the Obama administration. 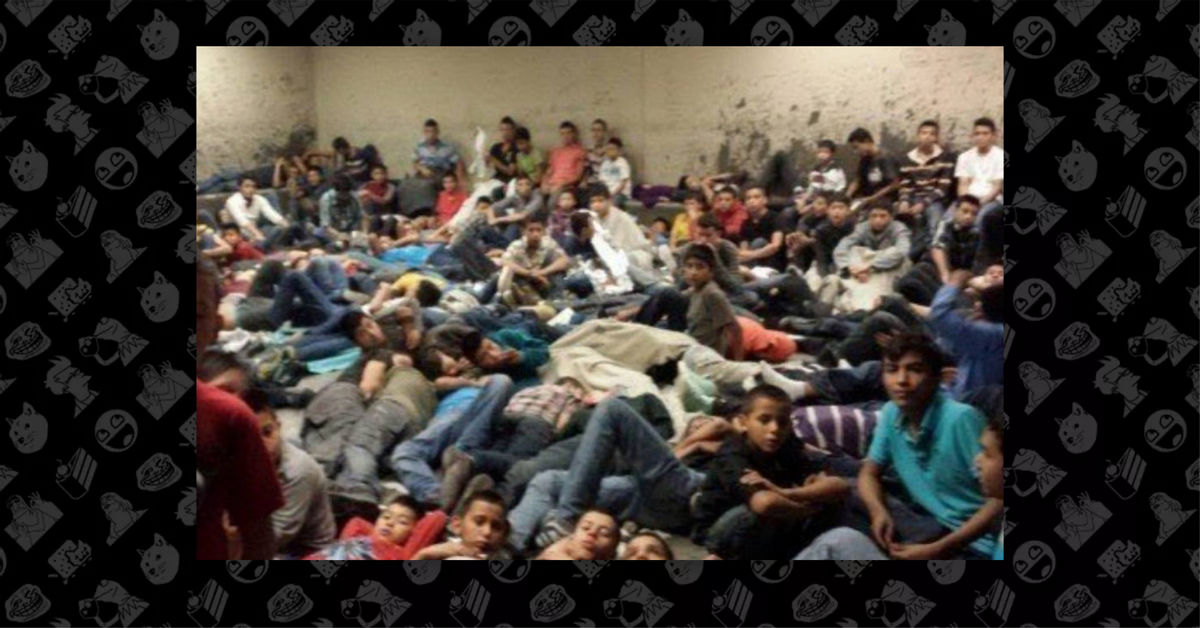 Claim:
An image from 2014 shows undocumented children separated from their parents by the Obama administration.
Rating:

During ongoing national debate over a novel policy of separating families at the border, a photograph circulated (originally from Joshua Feuerstein, a self-styled "American evangelist, Internet and social media personality" who last made headlines in 2015 when he manufactured a so-called "Christmas cup controversy") that purportedly depicted a room full of immigrant children that former President Barack Obama had supposedly removed from their parents' custody:

As you stare at this picture of innocent children being separated from their parents at the border and feel your hatred toward President Trump start to boil over from the bowels of your soul...I'd just like to point out it was taken in 2014 .. when Obama was President! #share

Some versions were shared with no accompanying text, inviting readers to project their own interpretation onto the image:

Images of its type (dated to the Obama administration) were often described as having been ignored at the time they were originally taken. However, this image did appear in anti-immigration memes from 2014 and 2015, such as one framing the photograph as evidence the Obama administration (described here as a "cabal") was encouraging ("seducing") immigrant ("illegal alien") children to come to the United States: INSIDE AN OBAMA APPROVED REFUGEE CAMP

140,000 Illegal Alien Children Seduced into coming to America By the Obama Cabal. MORE COMING NEXT YEAR TOO

Hey Obama.. Why not use the FEMA CAMPS??
Or are those being prepped for Patriot Resistance Fighters!!

The first iteration we could find of that image was alongside a 5 June 2014 post published by Breitbart. Although Breitbart shared the photograph on Facebook on 21 June 2018, the outlet did not include a link to its earlier reporting. In its original article, the children were described as "unaccompanied," indicating that they came without their parents, not that they were separated from their families by American authorities:

Breitbart Texas obtained internal federal government photos depicting the conditions of foreign children warehoused by authorities on U.S. soil on Wednesday night. Thousands of illegal immigrants have overrun U.S. border security and their processing centers in Texas along the U.S./Mexico border. Unaccompanied minors, including young girls under the age of 12, are making the dangerous journey from Central America and Mexico, through cartel-controlled territories, and across the porous border onto U.S. soil.

The photograph was subsequently disseminated by numerous web sites and news outlets. National Review's "Immigration Bedlam" said of the children in the photo:

The image and events around it were widely reported for several months, appearing in the Houston Chronicle, Splinter News, the Los Angeles Times, Mashable, and Reuters, among others.

Stories during that time specifically reiterated that the photographs showed unaccompanied minor children in the custody of United States Customs and Border Protection and temporarily housed at a Texas Air Force base:

A spokesperson for U.S. Customs and Border Protection said the agency has not “officially released any photos at this time in order to protect the rights and privacy of unaccompanied minors in our care.”

... A temporary shelter at Joint Base San Antonio Lackland has housed and provided services to 1,820 unaccompanied minors from Central America since May 18, San Antonio Express-News reporter Melissa Fletcher Stoeltje reported. The immigration is part of a “surge” of children said to be fleeing poverty and violence in their home countries, she reported.

Although the photograph is real, it does not show children separated from their parents by the Obama administration. In June 2014, the image was published as part of numerous news stories (and occasionally alongside editorial pieces objecting to the presence of the unaccompanied minor children.) The image did not develop a different backstory until June 2018, during a controversy that specifically involved family separation at the behest of the Trump administration.