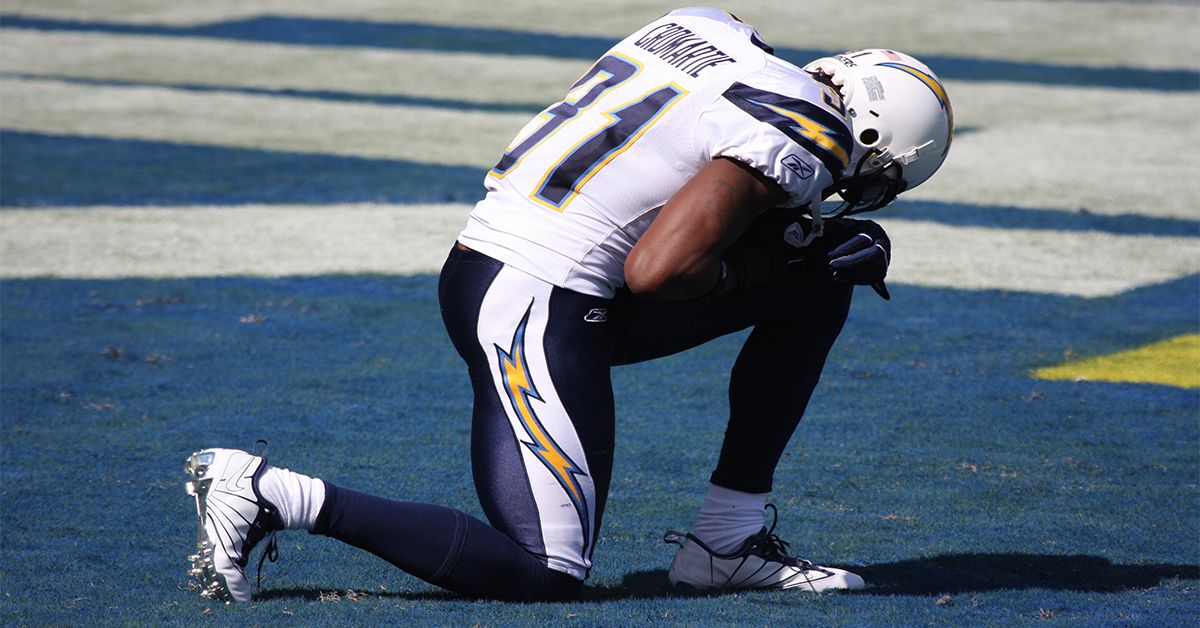 Claim:
NFL players protesting police brutality are doing so because they have many children with different women, leading their families into lives of crime.
Rating:

In October 2017, a Facebook post seeking to link protests against extrajudicial killings by police to single-parent families appeared and made the usual rounds.

The post misrepresents "taking a knee" demonstrations — in which National Football League players kneel during the national anthem in order to bring attention to police brutality, and which were originated by former San Francisco quarterback Colin Kaepernick in 2016 and continued into 2017 — by tying them to several players who have been retired for years:

Children raised in fatherless homes, especially black children, are far more likely than children raised in two parent homes to engage in criminal behavior and thus, have contact with police. Ergo when they father a child with a woman to whom they are not married - or at least living with - they are contributing to the problem against which these football players are taking a knee.

If you look at many of these players' records on out-of-wedlock children, you find that they are contributing significantly to the problem against which they are protesting.

Before these guys take a knee they should take a good look in the mirror. It appears that their problem is not the knee. The post's premise rests on the theory that growing up in a single-parent household can be a predictor of criminal activity. According to a 2003 study by the Center for Law and Social Policy:

Research indicates that, on average, children who grow up in families with both their biological parents in a low-conflict marriage are better off in a number of ways than children who grow up in single-, step- or cohabiting-parent households. Compared to children who are raised by their married parents, children in other family types are more likely to achieve lower levels of education, to become teen parents, and to experience health, behavior, and mental health problems. And children in single- and cohabiting-parent families are more likely to be poor. This being said, most children not living with married, biological parents grow up without serious problems.

But that argument has come under question. In 2012, University of Maryland sociology professor Philip Cohen noted:

Violent crime has fallen through the floor (or at least back to the rates of the 1970s) relative to the bad old days. And this is true not just for homicide but also for rape and other assaults. At the same time, the decline of marriage has continued apace. Looking at two aggregate trends is never enough to tell a whole story of social change, of course. However, if two trends going together doesn't prove a causal relationship, the opposite is not quite as true. If two trends do not go together, the theory that one causes the other has a steeper hill to climb. In the case of family breakdown driving crime rates, I don't think the story will make it anymore.

Not one of the players named in the post is currently active in the NFL. Terricka Cromartie said in an Instagram post in October 2016 that her husband's employment was terminated because he kneeled during the national anthem before a game, much like Kaepernick "took a knee" as part of his demonstrations. (Cromartie subsequently deleted her post.)

Faulk, who is currently an analyst for the NFL Network, has also expressed support for Kaepernick, saying:

The problem that I have with it is, they think it's civilians against the cops. It's not about that. It's [that] lives are being lost and someone needs to be held accountable and that's all Kaepernick was talking about. It doesn't matter what color you are — it just happens to be that what he's talking about specifically was black people.

On 24 September 2017, Faulk also criticized President Donald Trump for saying that NFL franchise owners should fire players who took part in any protest:

Right now, there's not anything good that I can say that would shine a light on this to help the situation. I find myself kind of perplexed by that situation, because normally I have something to say that could right the situation and make it better. I just believe that it's sad that our President lacks the moral compass on things to say and things to talk about when we have so much going on in our country. You want to attack people for expressing themselves and their freedom in this country and you say things like suggesting what an owner should do to a player for just exercising his right to protest peacefully. I really do not know where to go with this and where we are going and why this is where it is right now.

Lewis, who is an NFL analyst for Showtime, said in September 2017 that the Baltimore Ravens (his former team) almost signed Kaepernick to a contract, but were put off after the quarterback's girlfriend posted a picture of Lewis and Steve Bisciotti juxtaposed with a still from the movie Django Unchained showing Samuel L. Jackson's slave character mourning his owner.

NFL Network. "M&M: The Influence of Kaepernick's Protest on Society."

Parke, Mary. "Are Married Parents Really Better for Children? What Research Says About the Effects of Family Structure on Child Well-Being." Center for Law and Social Policy. May 2003.