Are These Immigrant Children in Orange Jumpsuits? 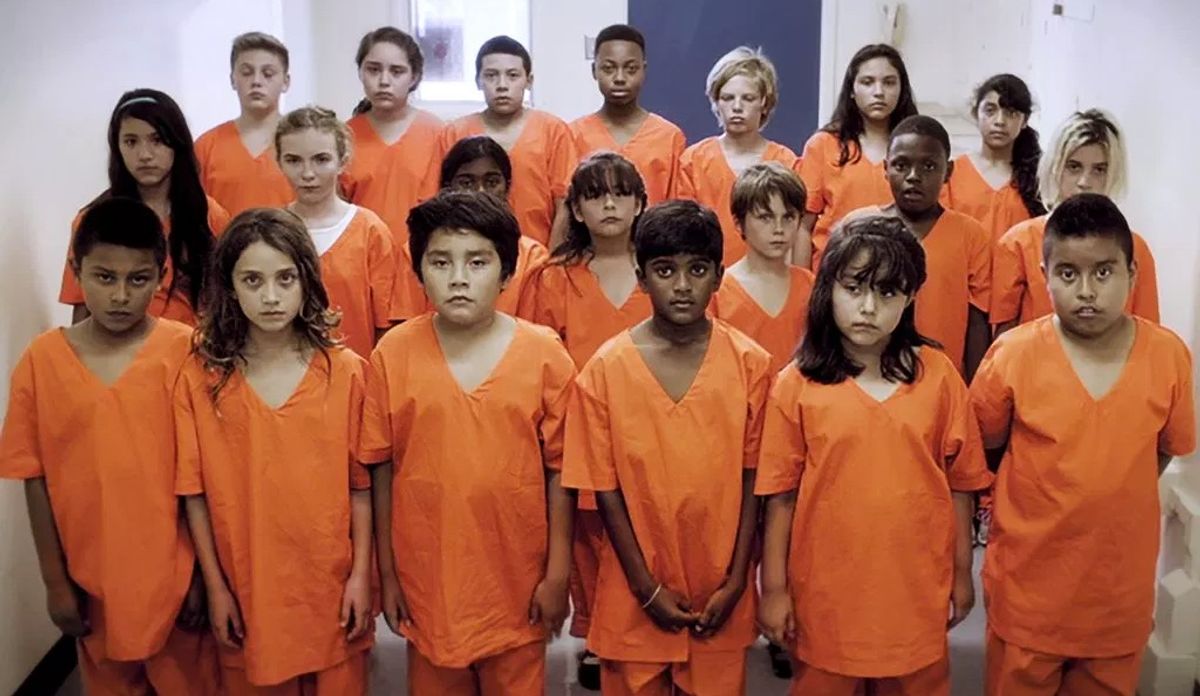 Image Via Californians for Safety and Justice (CSJ)

In early June 2018, we received numerous e-mails from readers about a Facebook post showing immigrant children in orange jumpsuits:

When and where was the picture of child prisoners in orange jumpsuits taken? Is it really of immigrant children separated from their families?

Sending you a photo, going around Facebook with immigrant children, supposedly removed from parents at US borders, posing at a detention facility, wearing orange prison jumpsuits. MOST posts are challenging as "Fake News", a lawyer friend says this is probably staged since PHOTOGRAPHS are not permitted in Homeland Security facilities nor the private prison contractors FOUR that we know of in TX. Church groups, lawyers, family can go, but cellphones & cameras are forbidden, so we're wondering how did THIS PHOTO get so posed with the kids? Perhaps you've already seen this photo? NO source on any of the photos. YES, it's tragic that children are being separated from parents & being held in detention, like prison facilities, but I don't think we need to stage a photo. My church group friends, I know for a fact, distributed 670 backpacks Christmas week 2017, to CHILDREN LOCKED UP at Karnes County Detention Center, (Texas) Yes. 670 children, alone.

There is a photo going around on Facebook of children dressed in orange prison jumpsuits. There is no attribution to the photo. It is being used as proof of children who have been taken from their parents crossing the border. I would Ike to know where this photo is from and when it was taken. I have a feeling it is not what it claims to be.

This shouldn't be happening in America, PERIOD.

I don't care how you try to spin it.
Children are not criminals. They don't
belong in cages, PERIOD! Neither the caption nor the image text used any immigration-specific wording, but no source for the photographs was provided. A reverse image search shows that the image appeared online as early as 2014 (and possibly earlier): The photograph was originally used to illustrate a claim that in the United States, prisons are constructed more frequently than schools: In 2014, the photograph accompanied an article about schools and prisons. It appears to be a still from the following video from Californians for Safety and Justice:

Russell Simmons served as Executive Producer for Californians for Safety and Justice's "Imagine” video as part of its #SchoolsNotPrisons campaign, which calls for replacing prison and justice system waste with common sense solutions that create safe neighborhoods and save public dollars.

The image likely caught on because of a real photograph that was leaked from a Texas courtroom which shows the mass trials that result from the Trump administration's so-called "zero tolerance" immigration policy, along with a story that appeared in The Intercept:

A very small, very young woman with chiseled features and disheveled hair spoke. She had been apprehended two days earlier after rafting across the Rio Grande near a county park with big trees and picnic tables that abuts the international line. She wept as she told Morgan, “I’d like to apologize, but the circumstances in my country made me do it.” She said she’d been almost raped and killed there, and she had come to the U.S. for protection and to see if she could help her sisters escape the danger.

“You are going to be sent to one of the immigration camps,” Morgan said. “You can try and request asylum.”

By May 10, Morgan was starting to get rattled by the increasingly disturbing content of the allocutions. By then, the government had begun systematically separating mothers and fathers from their children, including children who are preschoolers. A week later, the government announced plans to house the children on military bases.