In March 2021, a remarkably prescient page from a 24-year-old comic book resurfaced on social media. 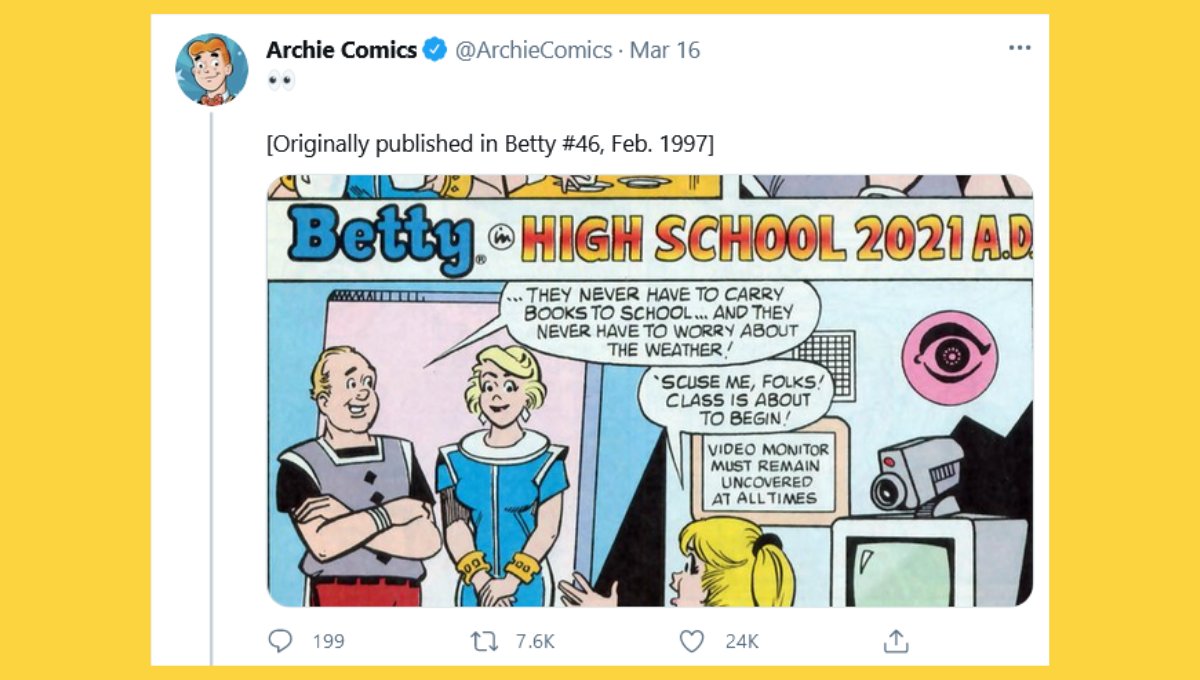 Claim:
A "Betty" comic book page shared widely online in March 2021 was authentic and came from the February 1997 issue that discussed home-schooling and remote learning in 2021.
Rating:

In March 2021, social media posts by Archie Comics appeared to capture the imagination of the public during the era of COVID-19 lockdowns, video-conferencing, and home-schooling by reproducing a 24-year-old "Betty in high school" comic.

On Twitter and Facebook, the publisher posted what appeared to be a page from a 24-year-old issue of "Betty," a now-defunct comic book series that revolved around the life of Elizabeth "Betty" Cooper, one of the protagonists in the long-running Riverdale universe, along with Archie Andrews and Jughead Jones.

The caption that accompanied the page read: "Originally published in Betty #46, Feb. 1997." The page consisted of three panels that imagined Betty's high school life in the year "2021 A.D."

Although Betty and her parents, Alice and Hal, are shown wearing somewhat fanciful space-age attire, the writers' vision of home-schooling and virtual video classes seemed remarkably prescient in light of the COVID-19 lockdowns prevalent throughout the world in 2020 and 2021: The "Betty in high school 2021" page appeared almost suspiciously on the nose. (The "Video monitor must remain uncovered at all times" sign was sure to strike a chord with anyone who has used video-conferencing for work or school in the past 12 months). Nonetheless, it was wholly authentic.

Aside from the fact that it was posted to social media by the official accounts of Archie Comics, which was unlikely to misrepresent its own output, proof of its authenticity could be found in various online archives of digitized classic comic books.

The source code for one of those web pages indicated that it was updated on Feb. 2, 2017. This means that, at the very latest, the page in question has been online since early 2017. Since that was three years before the cultural and social impacts of the COVID-19 pandemic became prevalent, it rules out the possibility that a third party meticulously created a fake set of "Betty" panels, complete with COVID-era in-jokes.

Furthermore, the archived copies of issue #46 contain several other pages from the imagined "2021 high school" story, including a remarkably prescient joke in which her friend Veronica "Ronnie" Lodge places a dummy of herself in front of her computer so she can skip virtual class, and a visit to the "old high school museum," where Betty says, "What fun they must have had socializing and discussing the day's events!"